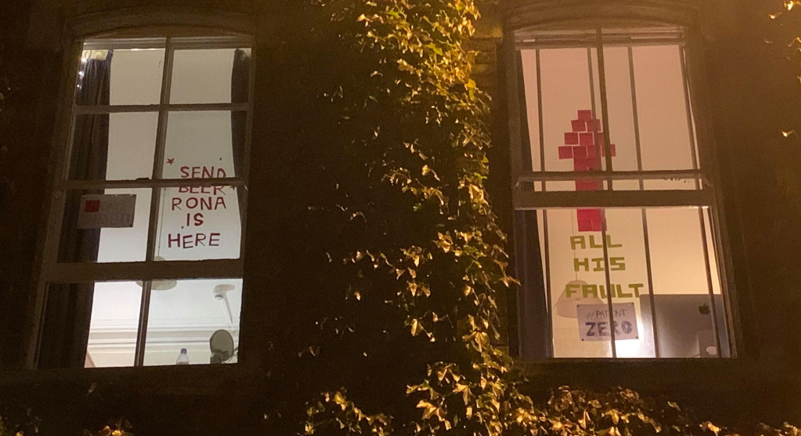 The Lockdown Before Christmas: Neither Workable Nor Wise

Image description: Student on New Inn Hall Street with sticky notes reading: “send beer; corona is here”, “it’s his fault” (with an arrow pointing to the window above), and “patient zero”

Recent news that students may face a two-week lockdown before being allowed to return home is typical of this government. It demonstrates a failure to consider students’ welfare, a misunderstanding of how the education sector works, and an incompetent approach to the logistical challenges we face.

The Guardian reported on the proposed lockdown last Wednesday, revealing that an isolation period between 8 December and 22 December was being considered, with students allowed home thereafter. The government has been widely reported to have been considering such a policy since September, refusing to deny that students would be locked down before returning home over the holiday period.

Yet it is difficult to see how such a policy could be enforced. Under current rules, students are strictly forbidden from entering different households’ accommodation. But in Oxford alone, there are innumerable instances of this rule being broken – and these are just times when students have been caught, punished, and the incident reported.

Moreover, this non-compliance is within university-managed accommodation. The vast majority of UK students do not live in halls, and it’s impossible to see how universities could possibly oversee their behaviour, or why they should have to.

This issue worsens given the dates the government is considering: the 8-22 December period begins after Oxbridge terms end, and almost half of universities finish by the first weekend of the period. Leaving students without even academic work to do will make it harder to prevent them from either socialising – rendering the isolation period pointless – or simply leaving.

And having just one two-week period for all students means public transport will ensure that  the 7th and the 22nd December will act as overcrowded bottlenecks. Surely this will create perfect conditions for COVID to spread?

Even if it were possible to enforce a two-week lockdown with no socialising, should it happen?

Young people have been disproportionately financially hit by the pandemic. As the Resolution Foundation reported, under 25s were the most likely age group to be furloughed, and were most likely to lose their job. Most student jobs are in the sectors which have been hardest hit by COVID – catering and hospitality – meaning a significant loss of income. In 2014, 59% of students had either a part or full-time job, meaning the majority of students are affected by this. Moreover, many students were forced to pay for unused accommodation during the third term of last year.

Forcing students to pay expensive rent during the proposed lockdown period is difficult to justify. Students will be paying rent during a period when they will not be receiving teaching and when they would normally doing holiday jobs. Similarly difficult to justify is the lack of any financial support whatsoever from the government. As well as rent payments and loss of income, it’s likely that students under a strict lockdown would be forced to pay extortionate prices for food packages, as international and self-isolating students have experienced already.

And support for international students has often been inadequate. When arriving before the start of term, “we were asked to have friends bring us our food during self-isolation, appealing to community spirit rather than hiring staff to support us,” Brainin tells me. “At the same time, we were being charged more than £600 for food and accommodation.” At Oriel, students in isolation were charged £28.57 a day for food—and were often forgotten.

On arrival at Balliol, even those with close friends in college – freshers had none – generally found that their friends had not yet moved in, leaving them scrambling to find anyone who could potentially bring them their next meal. While this precise system would presumably not be replicated in the event of a university-wide lockdown, it is a worrying sign of the lack of priority given to students’ welfare.

Money aside, a two-week solitary lockdown is clearly a massive problem from a welfare perspective. Young people were increasingly reporting mental health problems even before the pandemic. But the situation now – in particular that of freshers, whose final year at school was cut suddenly short, many of whose summer plans were abruptly cancelled, and whose first experience of university has been a huge disappointment – is far worse. Young people’s symptoms of depression have spiked in this period: forced self-isolation could lead to a full-blown mental health crisis worse than what we already have.

The government demonstrates a failure to consider students’ welfare, a misunderstanding of how the education sector works, and an incompetent approach to the logistical challenges we face.

Again, for international students this is even worse: “Most of the countries we return to will make us self-isolate, meaning we’ve all had to isolate for two weeks at the beginning of term, two weeks at the end of term in Oxford, and another two weeks in our home countries, at minimum,” says Brainin.

Having to isolate that long could mean students are unable to return at all. Lena Barsky, an international student at St Anne’s, says she isn’t sure if she’ll be able to return home for the holidays. “Having to book flights so extremely last-minute is really prohibitively expensive,” she says, and the isolation on both ends would significantly cut into the actual time she’d be able to spend at home. But “if I can’t, it’ll be the longest time I’ve ever gone without seeing my family.”

Hanukkah is “really important to me in terms of family and community.” The lack of consideration for Jewish students does feel like just another example of the government ignoring non-Christian festivals.

The fact that Jewish students would be locked down for Hanukkah, in order to make Christmas as close to normal as possible, is also grating. “It’s true that Hanukkah isn’t the most important of holidays in the Jewish calendar,” says Barsky, who is Jewish, “but it is lovely to be able to go home and celebrate with family. Lighting the candles together is something really special for me and my family.”

Aura Schonfeld, a Jewish student at St John’s, agrees, saying that Hanukkah is “really important to me in terms of family and community.” The lack of consideration for Jewish students does feel like just another example of the government ignoring non-Christian festivals.

Encouraging all students, without regard for personal circumstances, to return to university in person, and strongly urging (often vulnerable) lecturers to teach in person was the real issue. As has become clear after only a week of being back in Oxford, in-person classes don’t work when half of the class are self-isolating; even if they did, putting vulnerable students and staff at risk isn’t worth it.

Where at all possible, courses should have transitioned online, and students should have been able to make an informed choice on whether to return. The government should have supported universities in doing this, rather than offering so little support that universities risked a total collapse in their finances if they did not physically reopen.

But now that we’re here, there nevertheless remain many solutions that don’t involve an unenforceable, damaging pre-Christmas lockdown. Universities should have staggered leaving dates. University testing systems should be a key point of investment. Those US universities which seem to have controlled COVID should be examined, and their strategies – for instance, wastewater testing and pooled testing – replicated as closely as possible.

Universities should have staggered leaving dates. University testing systems should be a key point of investment. Those US universities which seem to have controlled COVID should be examined.

And the government should be helping universities with this process. Instead, it continues to show a complete lack of leadership, help, or effective communication with university students or staff.

Beyond testing, universities should be encouraging students to meet outside, rather than inside, by making outside spaces as nice as possible (building marquees, for instance, and providing heaters). They should be incentivising self-isolation, by providing free food deliveries and ensuring students have welfare support available to them. If a lockdown is to happen, universities should be focusing on supporting their students with the financial and welfare challenges that will be thrown up. As Brainin succinctly puts it, this is “the least colleges can do.”

All data visualisation in this article was created by Bee Boileau.