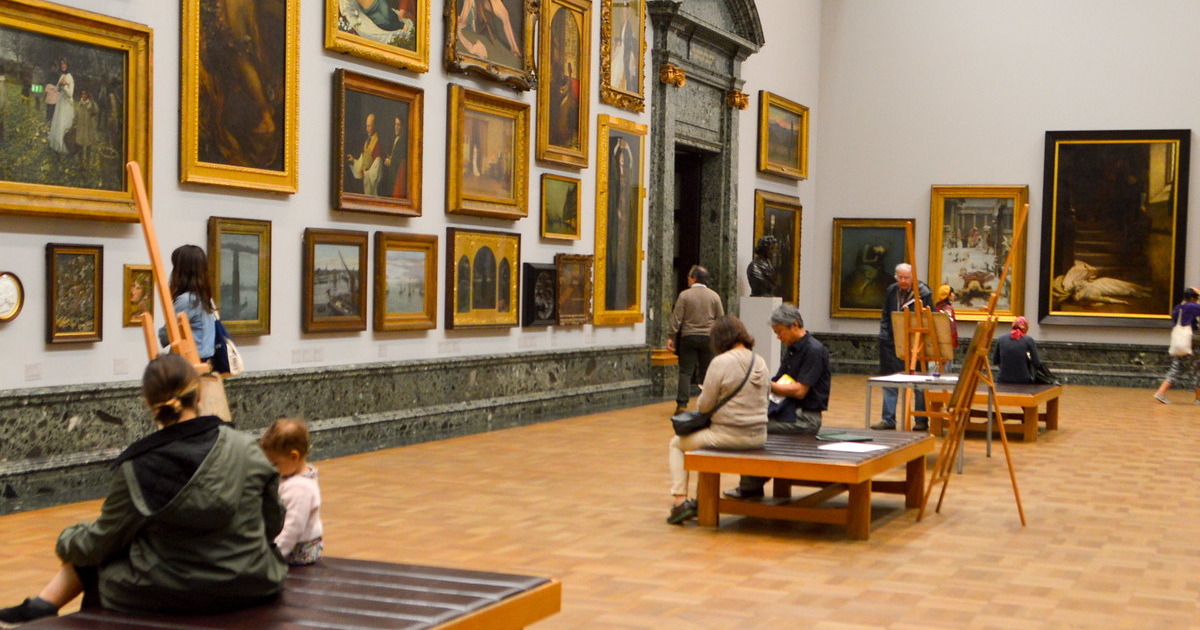 Tough Times at the Tate: How to Save Arts Jobs During Covid-19

Image description: People sit on benches looking at paintings in one of the galleries at Tate Britain.

As the pandemic continues, arts organisations have begun exploring new ways of generating income. Many galleries and museums are now running paid events online. The Royal Opera House is selling a David Hockney portrait, estimated to be worth £18 million. In recent weeks, Tate Enterprises, the commercial arm of Tate Galleries, announced it was making 313 staff from publishing, retail, and catering redundant. Furious, staff threatened to go on strike, saying they expected “creative solutions from creative institutions”. With no end in sight to the pandemic and local lockdowns increasing, was Tate Enterprises right to let go of almost half its staff? Was there another option?

Often seen as the playground for the elite, most people would think that galleries would be able to survive

The art world may not seem like the most likely candidate for sympathy at this time. Often seen as the playground for the elite, most people would think that galleries would be able to survive, or at least escape with only minor injuries. It’s easy to forget that many national galleries are in fact charities. They protect works of major national importance and showcase them for free to the public. These provide us with snapshots of both our past and present and educate and inspire future generations of artists, illustrators, photographers, animators, graphic designers, visual effects artists, and art therapists, to name a few. Galleries provide an important service.

When the government announced their £1.57 billion rescue package for the arts back in July, the Tate was already warning of job losses. Whilst £7 million was initially set aside for the gallery, this was only to keep the venue running. It could not be used to save jobs. With a reported shortfall of £50 million, redundancies were quickly announced.

Redundancies have become commonplace in the time of Covid-19. As of 2nd October, the Museums Association has tracked nearly 3,000 redundancies including 1,200 at the National Trust, 400 at the Southbank Centre, and 100 at both the Victoria and Albert Museum and National Museums Liverpool. Despite making their sites Covid-safe, visitor numbers have stayed below what galleries would normally expect. The Department for Culture and Sport showed that this summer, galleries, and museums were running at 12 percent compared to their normal summer levels. As of August, the Tate was seeing 15-20 percent of its normal visitors.

Whilst these numbers incite our compassion, the Tate has a dogged history with regards to employment. In January of this year, there was national outrage when the gallery advertised for a “Head of Coffee” position, with a starting salary of almost £40,000. In contrast, the average salary of a curator in London is £37,300. Since the redundancies were announced, the Public and Commercial Services (PCS) union has alleged that the Tate had outsourced several visitor experience assistant roles to external contractors instead of redeploying current employees, something the Tate has denied. It’s no wonder that staff, already affected by lockdown restrictions and reportedly “disheartened” at the management’s treatment of the situation, protested outside Parliament to express their anger.

The art world may not seem like the most likely candidate for sympathy at this time. Often seen as the playground for the elite, most people would think that galleries would be able to survive, or at least escape with only minor injuries

So how could the Tate save these jobs? Several galleries have sold artworks from their collections to cover the costs. However, this option is not so simple. Artworks have conditions in which they are given to galleries, especially if they’re gifted to national galleries like the Tate. These conditions can include if and when they can be sold and what can be put online. However, given the extraordinary situation we’re in, could the Tate not work out some sort of a deal? The Royal Academy, which has no public subsidies, is considering selling one of their masterpieces by Michelangelo. This could potentially save 150 jobs, half of Tate’s redundancies.

The Tate has made some moves towards changing its business model. Look at the Tate’s website and you can see various paid exhibitions and private viewings available online, as well as a host of free activities online, showing a shift towards digital income and allowing public access to their collections. But in other ways, the Tate has not evolved. They are still operating on pre-Covid opening hours and no word has been made on job shares, voluntary redundancies, or rehiring staff for the jobs they are currently advertising. The PCS Union has argued that jobs could be saved by using ten percent of the £7 million handout. It’s unknown, but unlikely, whether Tate Enterprises has since agreed to this.

Galleries rely on people. They rely on tour groups from the UK and around the world, coffee shops, tickets to exhibitions, and the ever-important gift shop. Organisations are dealing with a financial situation they could never have prepared for. But given the Tate’s recent history and reports from workers and unions, the Tate may not be using the imagination it displays in its galleries to save its staff.