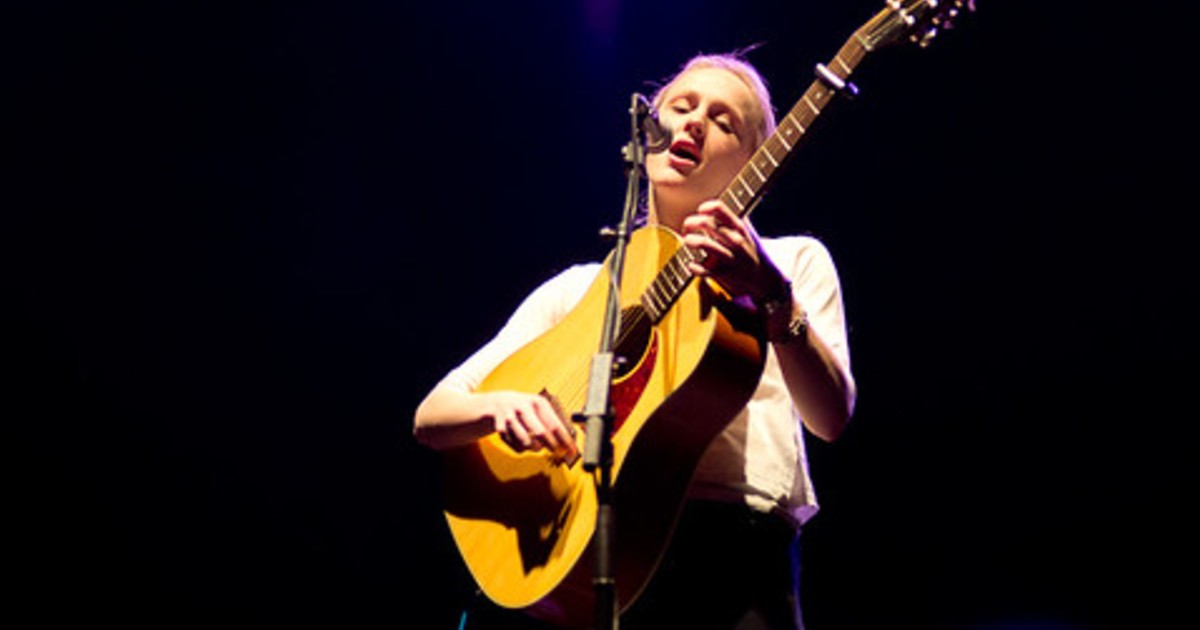 Image Description: Laura Marling singing into a microphone with a guitar, on a black stage.

In August, I wrote a review of Haim’s bubbly, frenetic, exploratory album, Women in Music Pt. III. I thought that it was a lockdown vibe, it buoyed me up, and I listened to it over, and over, and over again. But since September, a very different album has taken its place. Since moving back to Oxford, and joining my six housemates in a frankly chaotic resumed student life, Laura’s voice has been a constant presence. Cooking in the kitchen? Laura Marling. Reading in your room? Laura Marling.  Drunkenly dancing around the flat at 1am? Laura Marling.

Released in April of this year (hardly the prime time for releasing new music, one would think), Song for Our Daughter is Marling’s 7th studio album, and was (unsurprisingly) nominated for the 2020 Mercury Prize.  An explore of Spotify shows that Laura Marling’s discography is extensive, but nothing there is quite as good as this. It is all folksy, all sung beautifully, but it doesn’t have the heart of this. Or perhaps it doesn’t quite sit so well with the moment.

The album drifts from theme to theme seamlessly, and by the end she is contented, in love, singing to someone she hasn’t even definitely met yet. It is this happy, fulfilled, mellowness which is the album’s shining gem.  She talks of her daughter growing up, and “all the bullshit that she might be told.” She sings of her strange, angry, girl, and feeling held down. Marling doesn’t shy away from distinctly dark themes: her mother’s running away fund, or a woman believed because of the blood on the floor. ‘The End of the Affair’ is a sad, conflicted, elegy: the line “I love you, goodbye” is sung with heart-breaking sadness. It’s this truthfulness, I think, which makes this album so distinctive, and a more emotive whole, anchored down by the theme of a daughter, than Marling’s previous pieces.

Marling doesn’t shy away from distinctly dark themes: her mother’s running away fund, or a woman believed because of the blood on the floor.

Marling said that the album contains “all the confidences and affirmations I found so difficult to provide myself” – this is perhaps why it resonates so well, right now, both historically (the absolute mess of the world), and for many of us at this stage of life. It is going to be hard, it might be sad, it will be messy, but it will also be okay. There is a subtle, comforting, almost pagan religiosity running through it too.

Song for Our Daughter has a distinctly folky sound, interspersing more built-up momentum (Strange Girl) with moments of slow, calm meditation (For You). There is also a conversational quality: she sings brutally and then adds “I hope that didn’t sound too unkind”. Familiarity pervades the songs: little moments invoked by lines such as “the book I left by your bed” build up an almost domestic bliss.  There are also lots of unanswered questions, enough vagueness to be intriguing without losing the intimacy: Where, my flatmate asked ponderously, after the estimated 1000th listen to Alexandra, did she actually go?

Familiarity pervades the songs: little moments invoked by lines such as “the book I left by your bed” build up an almost domestic bliss

Lyrics and I don’t genuinely agree: I usually open and close my mouth like a fish in what I hope looks like knowledge of the words. But Song for Our Daughter’s lyrics are intense and poetic (“thunder gives away what lightning tries to hide”), and they have settled into my subconscious.  The line “release me, from this unbearable pain”, has been reverberating around my head almost constantly since I heard it – there is something very beautiful about the way she sings it.

Do I have a daughter? No. I am, in fact, a 20 year old university student who is currently failing to keep her one succulent alive. The irony of “build yourself a garden and have something to attend” as I stare out at the mouldy brick bunker outside my basement room is not lost on me. But Laura Marling similarly does not have a child. The beauty of this album is that through this imaginary daughter, so many emotions can be felt. And they are felt strongly, and consistently.

The beauty of this album is that through this imaginary daughter, so many emotions can be felt.

Love, in all of its complexity, is laid bare in 10 songs. “Love is a sickness killed by time”, but she also keeps a photograph of her love to keep them safe. It isn’t a long album, it is not even a particularly exciting one. But it is so deeply felt as “note by note, blow by blow” Laura Marling accompanies us on her very own discovery of love, life, happiness and pain.