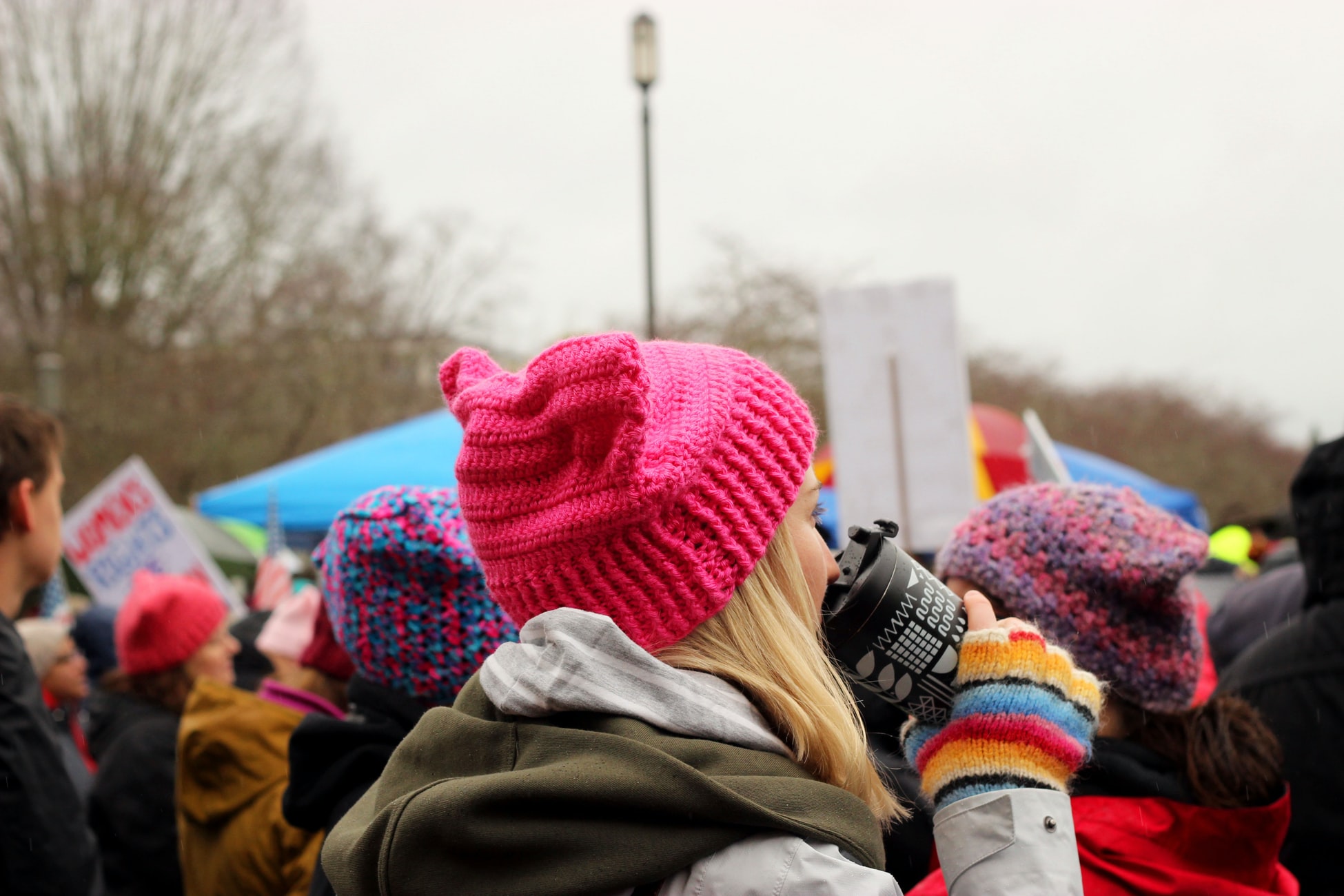 The problem with feminism

Image Description: Protestor in knitted hat at the 2018 Women’s March

All too often I hear the words ‘I support equality between men and women but I’m not a feminist’. Even the feminist icon, Simone de Beauvoir, repeatedly refused to align herself with the feminist movement until later in her career in 1972.

The term is divisive, polemical, scoffed at and avoided. ‘Feminism’ is defined in the Cambridge Dictionary as the belief that women should be allowed the same rights, power, and opportunities as men and be treated in the same way or the set of activities intended to achieve this state.

It’s disappointing that anyone should seek to distance themselves from this belief, yet I understand what might lead to that. The fear and unease I, and many others, feel before declaring they’re a feminist is not one that should be pushed off as unjustified. The term ‘feminism’ implicates so much more than the lexical definition.

No-one really seems to agree on what feminism is, if we still need it and whether it’s important or not. The narrative surrounding feminism is dripping with horror stories of so-called ‘feminazis’ wishing for a world free of men and mockeries of a line of women waiting to jump on the opportunity to wrongly accuse unsuspecting men. As ridiculous as these stereotypes are, tabloids are all too eager to push feminism into the forefront for all the wrong reasons.

Marginalised groups often pushed aside and excluded from the discussion

The truth is, feminism is divided within itself too, hence the hesitation and confusion people experience when faced with it. There is a spectrum of beliefs ranging from the view that feminism loses it’s utility after women are allowed the right to vote to the embarrassing and shameful transphobic conspiracy theories pushed into the limelight by trans-exclusionary radicals. In short, the list of differences and conflicts within feminism is headache-inducing and non-exhaustive, with marginalised groups often pushed aside and excluded from the discussion.

I can’t talk for all feminists, nor should I. But I know my own reasons for being one and these are reasons many of peers relate to, whether they identify as a feminist or not. I remember the first time I cried over being what society views as a woman. I was being criticised by a 50-odd-year-old man at 14 for being overly provocative just because of the way I sat.

I remember my mother explaining that she had to protect me more because I’m a woman, and it was my responsibility to make sure I didn’t get hurt by men that might want to exploit my body. I either weighed too little or too much, acted too immature or acted too mature, didn’t have enough ‘womanly’ curves or had too many, made too much of an effort with my appearance or looked too scruffy.

What on earth are we supposed to do to be viewed as ‘enough’ as women? How do we remove the collective weight on all our shoulders, regardless of gender, of the contradictory expectations that society has on gender norms and behaviour?

Feminism shouldn’t be a cis-centred, white-centred, middle-class narrative and it’s time we stop denying that a lot of the time it is

These questions are why I’m a feminist and I strive to remove this weight the best I can. As hard as I work at trying to answer these questions, I’m pretty rubbish at it. It’s easy to give up and to give in. Without unity, these issues seem insurmountable and I haven’t even scratched the surface of it.

It’s hard to back your voice when you’ve been silenced but it has been done and it will continue to be done. Feminism shouldn’t be a cis-centred, white-centred, middle-class narrative and it’s time we stop denying that a lot of the time it is.

The essence of feminism, of being a good feminist, should be rejecting the social constructs that define gender as a whole and to be free from the guilt and constraints that inevitably arise from the incoherent expectations we are conditioned to live up to. The world would be a much better place if we all did. But what do I know? I’m definitely not the perfect feminist, I don’t need to be.