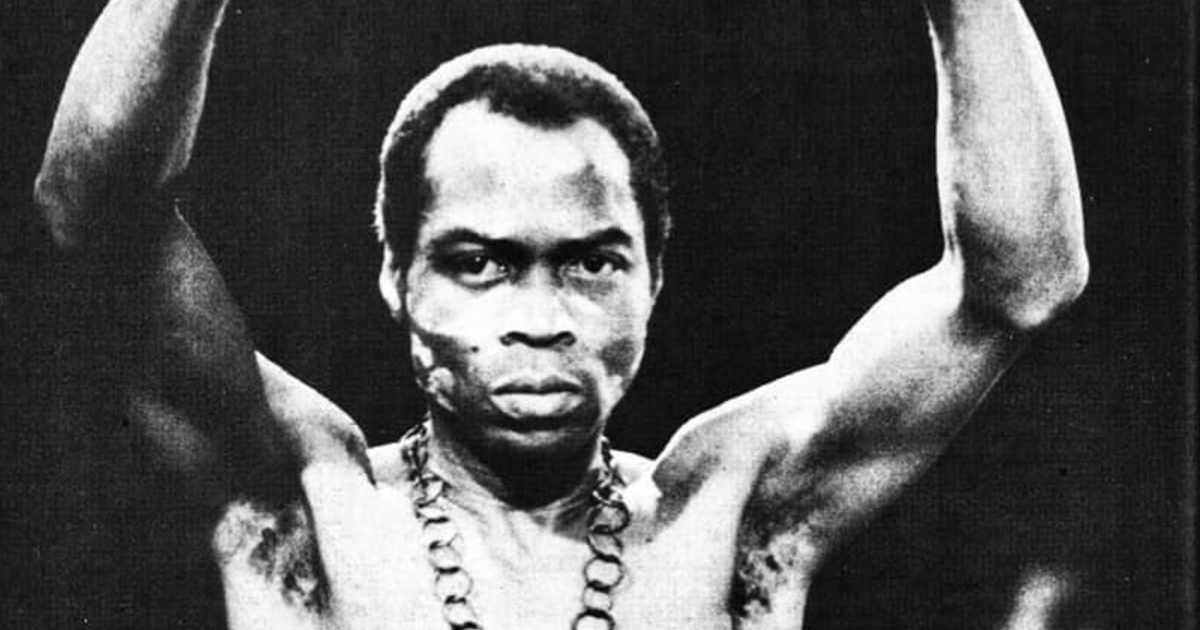 No musician has ever so suicidally walked the revolutionary walk as Fela Kuti in 1979, when he drove to the entrance of military head of state Olusegun Obasanjo’s barracks with a coffin, under gunfire, and demanded that the Nigerian Government take accountability for his mother’s death. Fela’s mother had been fatally injured a year earlier, when Nigerian soldiers stormed his compound, the ‘Kalakuta Republic’. Fela biographer Michael E. Veal records that ‘A number of the men reportedly had their testicles smashed by the soldiers, and the women were beaten, forced to strip, and carried naked through the streets on flatbed trucks to the army barracks, where they were reportedly raped and tortured.’ Inside the house, Fela’s elderly mother – and revolutionary figure in her own right – Funmilayo Anikulapo-Kuti was thrown out through a second floor window, while soldiers burned the compound to the ground.

All this for Fela’s criticism of the military regime in his song ‘Zombie’, in which he chastised soldiers who blindly obeyed orders, and whose consciences were so cheaply sold. By this time Fela Anikulapo Kuti was already one of Africa’s brightest musical stars. Before his death in 1999 he would play shows across the world, collaborate with artists like Paul McCartney and Ginger Baker, and be profiled in the New York Times. After his death his legacy has continued to grow – a musical co-produced by Jay-Z and Will Smith, name checks by everyone from P Diddy and Beyonce to the London Review of Books. But more importantly than all that, he continues to be loved by the Nigerian people, at home and abroad. This is partially for his music, which documents an extraordinary life in which he once married 27 people all at once, only to divorce them ten years later, paid an apparently extortionate amount to swap fecal samples in prison and avoid prosecution for drug use, and once ran for Nigerian president only to be kept off the ballot. But – as recent claimants to his throne Burna Boy and Wizkid would do well to remember – he criticised the Nigerian government constantly for its corruption, caprice, human rights violations and alignment with a neo-colonial agenda, even when his life and livelihood was on the line. And it very often was.

Fela Kuti himself in the 1970s argued provocatively that no African government had the moral high ground from which to criticise South Africa and Rhodesia for their apartheid regime, because they did the same or worse to their own people.

Fela’s attempt to hold the Nigerian government to account – as have nearly all others – failed. After the incident he released ‘Coffin for Head of State’, in which he plumbed the depths of the government’s hypocrisy, and their constant recourse to religious language while committing hellish crimes.

The government inquiry into the raid on his commune claimed ridiculously that the whole commune was destroyed by ‘an exasperated and unknown soldier.’ This morning, the 21st of October 2020, the Lagos State governor Babajide Sanwo-Olu blamed the deaths of at least twelve unarmed #ENDSARS protestors at the hands of the Nigerian military on ‘forces beyond [our] direct control’. Sound familiar? In 1979 Fela was protesting against Olusegun Obasanjo, who is often lauded for being the only Nigerian military leader to voluntarily relinquish his power and hand it to a civilian government. What is often forgotten is that this was only done once the 1979 elections had been safely rigged in favour of the consensus establishment candidate, Shehu Shagari. This constant chopping and changing – between democracy and military rule and  between different leaders, is one of few constants in the history of a chaos country, part of a fun game of musical chairs in which the Nigerian people always lose. In 1986 Fela was released from prison, after being held for two years on dubious currency charges. He immediately started writing the song ‘Beast of No Nation’, in which he mocked Nigeria’s new military leader for launching a ‘public discipline’ campaign to whip the Nigerian people into shape. This ‘War against Indiscipline’ included having whip-wielding soldiers enforce queueing for public transport, having public servants do frog jumps as a punishment for tardiness, and a sentence of twenty-one years for any student over the age of seventeen caught cheating in exams. The then military leader, Muhammadu Buhari, is the current ‘elected’ president of Nigeria. In a country where nearly half the population is below thirty, he is seventy-seven.

Fela recognised the link between the musical and the political better than most others, and in concrete terms.

During the #ENDSARS protests he initially promised to launch an inquiry into the rogue unit, which Amnesty International notes mostly brutalises ‘young men between the ages of eighteen and twenty-five, poor and from vulnerable groups’. As the protests swelled in size, Buhari promised to abolish the unit entirely, but simultaneously announced that it would be replaced with a new unit, SWAT, for Special Weapons and Tactics. The recent massacre at a protest in Lekki, a suburb of Lagos, was to me the most personally affecting but was only one of several uses of lethal force against peaceful protestors, which are only the latest chapter of a long and sordid novel of Nigerian repression. Fela Kuti himself in the 1970s argued provocatively that no African government had the moral high ground from which to criticise South Africa and Rhodesia for their apartheid regime, because they did the same or worse to their own people. ‘Between April and May 1978 the Nigerian police and army opened fire on demonstrating students, killing more than nine. Yet the liberation of South Africa is a major foreign policy issue for the Nigerian military government. Is the killing of students by the Nigerian police and soldiers not worse than the action of John Vorster or Ian Smith?’ Sound familiar?

It is a reminder that having a platform of any kind is both a responsibility and an opportunity, but that true activism rarely comes without sacrifice

Fela’s legacy, like that of any great king, is highly contested. Burna Boy, the self-titled ‘African Giant’, was roundly criticised for not speaking up quickly enough at the start of the #ENDSARS protests, but has recently started to support the movement in concrete and consistent ways. The events of Thursday the 20th October appear to be a watershed moment of bloodshed, and who exactly is at the top of the Nigerian music industry – the most successful on the continent and estimated to be worth $50 million in revenue by 2021 – is far less important than ensuring the industry speaks up against the government. Fela recognised the link between the musical and the political better than most others, and in concrete terms. He famously attacked the Vice President for Africa and the Middle East of US music multinational ITT (which owned his label), joking that it should stand for International Thief Thief. That Vice President, MKO Abiola, was a long time member of Nigeria’s kleptocratic class, even running for presidency in 1993, the last elections before the rise of Nigeria’s worst military leader Sani Abacha. In the wake of Abacha’s death in 1998, Nigeria transitioned to the democracy it narrowly remains today. Fela never saw the end of military rule in his country, dying of AIDS in 1999, but his legacy lives on. It is a reminder that having a platform of any kind is both a responsibility and an opportunity, but that true activism rarely comes without sacrifice, both reminders sorely needed in these trying times. Long live the Black President.