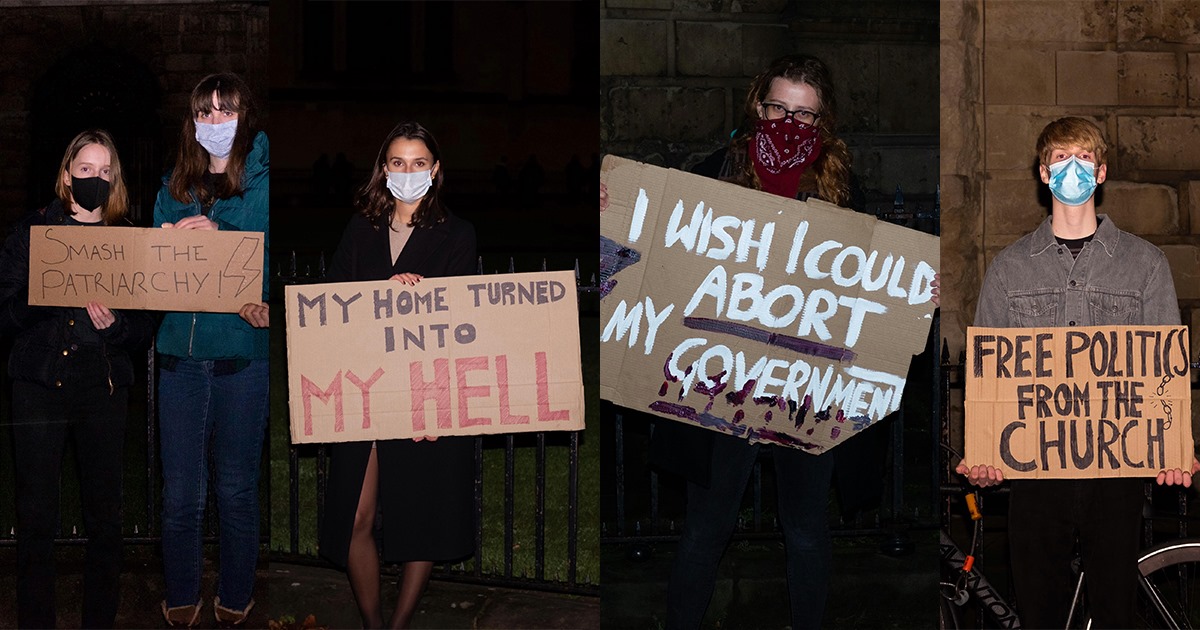 Image Description: protestors stand outside the RadCam, wearing masks, with signs reading “smash the patriarchy”, “My home turned into my hell”, “I wish I could abort my government”, and “free politics from the Church”.

Protestors gathered outside the Radcliffe Camera last night in opposition to the recent ruling of the Polish Constitutional Tribunal. The Tribunal declared that abortion as a result of foetal defects was unconstitutional. The event was organised by the Oxford University Polish Society (OUPS), and supported by Oxford University Feminist Society and Amnesty International. On November 25, at 8pm, the socially distanced event was attended by an estimated 100 people over the course of the evening.

The ruling further restricts the rights of women in Poland to have an abortion. The implications of the ruling going into effect will be that women in Poland will only be able to have an abortion in cases of rape, incest or to protect the mother’s life. The Polish constitutional court said that legislation allowing for the abortion of malformed foetuses was “incompatible” with the constitution. The kind of abortion that was banned has accounted for around 98% of less than 2,000 of the legal abortions that occurred in Poland in recent years.

Prior to the event, OUPS released a statement on their Facebook page, writing that they were “shocked and saddened” by the ruling.

“This divisive decision was pushed exactly when we need to be united more than ever, as the COVID pandemic continues to pose a significant challenge to our country…It is our long-held goal to provide a genuinely inclusive and supportive environment at OUPS to everyone who might feel targeted by the fundamentalist groups.”

At the protest, chants included “Women’s rights are human rights!” and “precz z Kaczorem”, which translates to ‘away with the duck’. This second chant is a reference to Deputy Prime Minister and leader of the Law and Justice party, Jaroslaw Kaczyński, whose surname is very similar to the word ‘Kaczor’ which translates to ‘duck’. This second chant therefore calls for his removal.

The Oxford University Polish Society encouraged people to wear black clothing when attending the event. Many people brought candles and signs to the rally. Signs included, amongst other things, “Free politics from the Church”, “End the war on women”, “I wish I could abort my government”, and “Fight the virus, not women”.

The Oxford Student spoke to some students who attended the protest. One student told us that “I attended the protest because I am sick with how the government is destroying the democracy to destroy women’s rights. Also, this will only increase women’s suffering – forcing women to seek abortion abroad, or in illegal ways which may be extremely dangerous. Thus, I was there due to moral obligation – to show solidarity with women against oppression.”

Natalia Rochmińska, Press Correspondent for Oxford University Polish Society, also spoke to us, stating: “I cannot express how saddening it was to find out that the right-wing party had taken advantage of the ongoing pandemic and in times when we, as a nation, ought to say united, they have gone against our fundamental rights.”

Continuing, she said: “Poland has already had some of the strictest abortion laws in Europe and it is estimated that about 100,000 women seek an abortion abroad each year to get around the tight restrictions. The new provision bans abortion in cases where ‘prenatal tests or other medical indications indicate a high probability of severe and irreversible foetal impairment or an incurable life-threatening disease’. This kind of abortion has accounted for around 98% of less than 2,000 of legal abortions in Poland in recent years, meaning the ruling bans virtually all termination procedures taking place in the country.

“The results will be agonising for women and their families especially hurtful to the most deprived members of society, forcing some to carry a child even if they know the baby will not survive childbirth, which will then be likely to impose an overwhelming emotional trauma and other severe implications. As a Polish woman, I’m proud to see such an enormous wave of protests involving both women and men, united in supporting the protection of fundamental human rights.”

Igor Wasilewski, the co-pres of OxPolSoc and co-organiser of the demonstration, said: “We stand united with the women in Poland whose rights are being attacked by the conservative rulers again. The Law and Justice (PiS) party broke the so-called “abortion compromise” worked out in 1993, which anyway was one of the strictest abortion laws in EU, and have done so using the Constitutional Tribunal which they had previously politicised. The majority of Polish people supports keeping or liberalising the abortion law, so this action shows how unfair the ruling party is being towards the Polish people and how it doesn’t care about the rule of law and the principles of democracy.
“What’s even worse, they announced this verdict, which was bound to cause a lot of discontent, during the biggest rise in COVID cases in Poland (over 10000 a day), making outraged people risk their health and life when protesting. We want to support the tens of thousands of people demonstrating all over Poland these days and show that we will not sit and watch PiS deprive the women of their rights and dismantle the democracy our parents and grandparents have fought so hard for in the 80s.”
This protest was part of a large wave of protests which have taken place in the last four days across Poland. Thousands have attended these rallies in various cities, including Warsaw and Krakow. Peaceful protestors have been met with the use of pepper spray and homes have been violently raided in search of hiding protestors. While Poland is a majorly Roman Catholic country, opinion polls show a majority against making the abortion law stricter. Protestors yesterday began disrupting Church services as part of wider demonstrations.