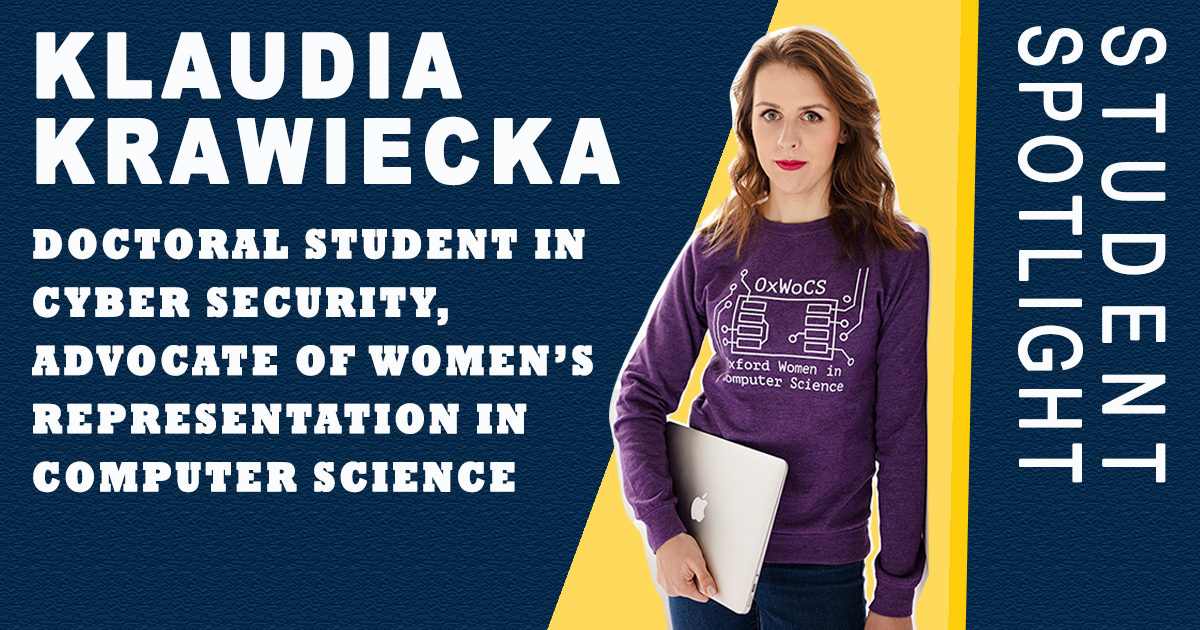 In continuation of our ‘Student Spotlight’ series, we have Klaudia Krawiecka, a doctoral student in Cyber Security at the Department of Computer Science at the University of Oxford. She was recently shortlisted for the Vice Chancellor’s Diversity Awards in 2020 for her inspiring work in advocating for women’s representation in her department and the wider University. I sat down with Klaudia to talk about women in Computer Science, her work with secondary school students and what she would like to see improve in the future for her and her colleagues.

What are the difficulties that you have faced as a woman in your field?

The main difficulty for me was that I was underappreciated. I always felt that because of my gender I was constantly challenged. If I did something I would be questioned which wasn’t the case for my male counterpart who wasn’t questioned at all. For this reason, I felt the need to prove to everyone that I deserved to be in this field. To be honest, I still have the same issue.  While I receive great support from my colleagues, I am still one of two women in a research group of twenty and I feel like I have to prove myself before being respected by others. This happened as early as my high school years. I had professors who couldn’t understand what I was doing in Computer Science classes; I was the only girl to attend them in my school. I scored the highest mark at the end of my examinations and my professor said, ‘That’s lucky! Usually, girls don’t score that highly’. Throughout my undergraduate degree, I would hear these kinds of jokes; the cultural perspective of women in science is a big difficulty that I have faced.

Why do you think there is still an issue with women’s representation in computer science?

If you look at the numbers from the Outreach Office in the Computer Science Department, you can see that numbers are slowly rising but a big problem is that it’s still embedded in the culture that Computer Science is a male-dominated subject and that girls are not good enough to study it. Some countries have managed to overcome this, I was part of a telecommunications class in Norway and I was surprised to see that there was a 50-50 split between men and women.

I think another problem is that there is a stereotypical picture of a programming “nerd” that is uncool; nobody wants to be associated with that image, especially not at primary school level. Unfortunately, the subject is still not seen as cool enough. This is the reason for the workshops that I put on with girls from schools. When they see from a young age that their female teachers are computer scientists, they develop a different approach to subjects later in life, because seeing more women in science appears becomes more normal.

You became President and Outreach Officer of the Oxford Women in Computer Science society (OxWoCS). What were your greatest achievements in these positions?

I am absolutely in love with the ‘Inspire Her’ workshops that I help to run; my passion stems from my own experience growing up. When I was ten years old, my mother attended a Master’s program in Economics and Computer Science. She took some programming lessons and showed me how to build simple websites based on HTML and CSS. As a child, it was really rewarding to create something that others could use professionally. Later I set up a small business for family friends and I would create websites for them. These ‘Inspire Her’ workshops are close to my heart because I was inspired to study Computer Science by my mother. Your role model can really change your perspective on many things; my mother was very supportive of me going into the same field. I am very proud to pass on the same passion to younger female students from primary and secondary schools.

Another big achievement of mine was organising the Oxford Hack 2018 with OxWoCS and volunteers from other societies. As a committee we took into consideration everyone’s needs: we had prayer rooms and quiet zones, for example. This opened my mind about how many people were now able to participate because of those changes. I also reached out to many societies from other UK universities to invite more women in Computer Science to join in. It was a really great experience!

You’ve already touched on the fact that when you’re not completing a DPhil you run programming workshops for schoolgirls in years 7-9. What has been the most rewarding aspect of your volunteer work?

We run these types of workshops in different formats. One of them is a mother-daughter workshop which is great because you can see how both sides can learn from each other. I was always interested in looking at how generations can learn from each other. For instance, In Poland, I had my foundation, HackArt, and with this, we created a series of workshops for grandparents and grandchildren. Grandparents were more focused on building something and their grandchildren would teach them the more technical side of things, such as connecting sensors. I was thinking about how we could pass on information from one generation to another and this is what we’ve achieved with these types of workshops. In general, we also have workshops for young boys and girls as well as their parents who all learn together. It’s nice to see in the early stages of primary schools that working together with a member of the opposite gender is perceived as completely normal in science. In this process of education, the children see each other as equals. These are the most rewarding experiences because I have seen how mentalities can change in this environment. By this, I really mean that participants see girls and women participating in Computer Science as something very normal and natural which carries on in later years.

A lot of this work contributed to you being recognised as a champion and role model in the Vice-Chancellor’s Diversity Awards 2020! How does it feel to be shortlisted?

My friend and colleague from OxWoCS, Alina, nominated me for this award. It felt really special that someone thought of me and my actions in this context. To be honest, I always do this work because I simply enjoy watching people grow together and help each other in my field, but it was nice to be recognised as someone who can provide opportunities for others. I’m looking forward to meeting the other shortlisted candidates and winners in the category at some point. Overall, it’s a really exciting award to be given!

You’ve already achieved so much in your department, society and the workshops that you deliver. What future goals do you have in light of your work?

What I, and other colleagues, have noticed is that the University of Oxford has a lot of theory-based subjects, which are useful, especially when you need to understand the theory of something before implementing it. However, there aren’t many classes where women can actually build things, for example, like learning how to solder or completing any kind of engineering work. I’ve been thinking about organising such sessions for undergraduate students that belong to our society and anyone is part of the Computer Science Department. So, I would like to teach some more applied, manual work.

I’ve also been thinking about creating study groups or research-support groups for undergraduates and graduates to prepare them for interviews in industry. There are many students whose programming skills are neglected, and these are really useful to have if you want to work in industry. I’d like to set up sessions where we can all go through the ‘Cracking the Coding Interview’, which is one of the most well-known books for preparing for the interviews, and help each other with teaching and practising exercises.

More broadly, how would you like to see the field of Computer Science improve for women in the future?

For me, it’s quite simple. I just want everyone to feel like they are able to fulfil their passions. I would like to see that women feel more confident to speak up and that they remember that they are enough. This is really important in job applications. When we have a list of requirements, women tend to want to fulfil every single requirement of the specification, while men just apply even if they meet about 60% of the criteria; quite often men do get the jobs. There still is this barrier for women to do the same thing and to learn that they don’t have to be perfect; what’s important is that they are passionate about what they’re doing.

Last year you were President of the Oxford Hack 2018. For those who do not know, it is an annual hackathon event in which over 300 people get together to collaborate on different projects in 24 hours. What did this involve and why would you encourage students to take part?

When I started organising the Hack there were only two of us looking at sponsorships, logistics, PR, website building, etc. There was a lot to do! It was a big event for around 300 people with more than 900 applications; it was quite challenging to handle all of the preparations. Gradually we took on more committee members who thankfully helped us out. I learned a lot and was really proud of organising something completely from scratch. I felt very powerful and able!

I have taken part in hackathons for many years now. For me, it’s a great experience where I can disconnect for a couple of days and work on a project that I wouldn’t have worked on otherwise. It’s a brilliant opportunity to freshen your programming skills, especially as a PhD student, when there isn’t always the chance to do much programming.  Here you can see what’s out there in terms of new technology and learning about what is trending. Of course, it’s also good to meet new people who may later become your research peers and/or friends.

I have always been a bit of a perfectionist and I’m still learning to move away from this because you learn more from your failures. This is something that I never appreciated when I was younger; I appreciate it much more as a PhD student! Failing is part of our journey to improve as individuals, so we shouldn’t be afraid to fail sometimes.

Be part of different societies and initiatives! We have this idea that we should develop who we are besides what we do. I think it’s really important to be part of activities that allow for this. Of course, focus on your studies or passions but there are so many interesting things out there to also take part in! Locking yourself in your room with your textbooks all day is not the best thing to do. My advice would be to explore different opportunities around you!

I recently received a book from my friend that I have found really interesting; I just wish that I had read it when I was an undergrad in my early twenties. It’s called ‘The Defining Decade 20: Why Your Twenties Matter and How to Make the Most of Them Now’ by Meg Jay. It shows you how to build your personal capital, how to become a good person and how to find your true passions in life. It offers guidance during a time when we are all trying to discover who we are.