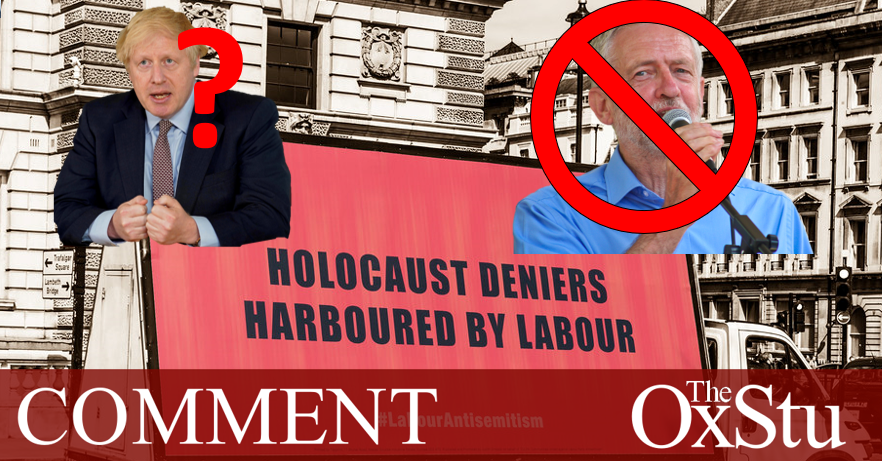 Can we talk about Boris Johnson’s anti-Semitism now, please?

Finally, Labour has begun to tackle the anti-Semitism rife in its party. It’s about time. Yet somehow, the Conservatives have managed to ride this wave unscathed while their very own leader—and our Prime Minister—has expressed his own and supported others’ anti-Semitic views in the past. And yet no one seems to be talking about it.

This isn’t the place to discuss Corbyn or Long-Bailey, but frankly it’s clear to me and many others in the Jewish community that they were unequivocally anti-Semitic. No ifs, no buts. But so are things that Boris Johnson has written in his own book.

What was so wrong with the content Long-Bailey retweeted is that it played into an insubstantial claim that Jewish people were responsible for the violence leading to George Floyd’s death. That Jewish people are responsible for global violence is an anti-Semitic stereotype that harks back at least 2000 years. For example, there’s the rubbish belief that Jews sacrifice Christian children at Passover to harvest blood for unleavened bread (which was started in the 12th century and resurrected by Hitler and the Nazis). It’s so ridiculous it would be funny – except for the fact that this has been used as justification for unspeakable acts.

The Conservatives have managed to ride this wave unscathed while their very own leader—and our Prime Minister—has expressed his own and supported others’ anti-Semitic views in the past.

But where Long-Bailey merely retweeted someone else’s content which contained one line of anti-Semitism (not that that makes it excusable), Johnson himself wrote anti-Semitic stereotypes. In this case, the good old stereotype of the Jewish oligarch who controls the media and fixes elections. His character, Sammy Katz, with his “proud nose and curly hair”, is tight-fisted and exploits immigrant workers for profit. Ironic, considering that’s what BoJo’s government like to do. Katz, described as an “unblinking snake”, is portrayed as the sort of character who goes searching the red light district for “a bit of black”.

Elsewhere, Johnson adds the completely unnecessary “Maybe there was some kind of fiddling of the figures by the oligarchs who ran the TV stations (and who were mainly, as some lost no time in pointing out, of Jewish origin)” which undoubtedly plays into the stereotype of Jewish people controlling the media. And this isn’t just digging up Boris’ long-gone past—this was when he was shadow minister for the arts.

Andrew Gwynne, Labour’s shadow communities secretary, said: “Boris Johnson’s writing invokes some of the oldest and most pernicious antisemitic tropes about Jewish people controlling the media, and associating Jewish people with shady business, financial greed and being responsible for oppression and exploitation.”

Boris added the completely unnecessary “Maybe there was some kind of fiddling of the figures by the oligarchs who ran the TV stations (and who were mainly, as some lost no time in pointing out, of Jewish origin)”.

But that’s not all. During his time editing for The Spectator Boris also allowed Taki Theodoracopulos to publish articles—the same infamous Taki who boasted of being an anti-Semite. Taki was even called out by his own friend, Conrad Black, owner of The Spectator, who compared him to Goebbels. And Black isn’t one to call someone out easily: he even defended Taki’s “right to dislike individuals and whole nationalities and ethnic groups” (side-note: there’s no such right, that’s called racism).

But Taki’s article was too far, even for Black. Taki has gone on to suggest that the Right should have anti-Semitic tinges, saying “we” should be anti-Jewish. Yet this was the same man Johnson celebrated as a “distinguished columnist” and kept on in spite of once acknowledging he was “not mad for” Taki’s racism. He knew Taki was anti-Semitic and racist, but kept him on. I can’t spend the whole article on Taki’s anti-Semitism and Johnson’s willingness to turn a blind eye, but you can read more here.

Taki has gone on to suggest that the Right should have anti-Semitic tinges, saying “we” should be anti-Jewish. Yet this was the same man Johnson celebrated as a “distinguished columnist”.

Writing about or supporting writing about absurd claims for Jewish world domination is definitely anti-Semitic. Such ideas have given rise to and cultivated very grave anti-Semitic sentiment: in 1903, Russian authors fabricated a text, The Protocols of the Elders of Zion, purporting to contain a Jewish plan for world domination. Henry Ford provided money to print and distribute 500,000 copies. Nazis made German schoolchildren read it in 1933 in spite of its being exposed as fabricated by The Times in 1921 and by the German Frankfurter Zeitung in 1924. It fuelled Nazi anti-Semitism, was a significant cause of anti-Jewish pogroms in the Russian Empire, and continues to be used in far-right groups today. Political scientist Stephen Bronner called it “probably the most influential work of antisemitism ever written”. Too long, didn’t read? False claims about Jews pulling the strings leads to very real physical violence and death.

The common themes in these historical examples are the ideas that “Jews always scheme”, “Jews are everywhere”, and Jews are “behind every institution”. I’m saying all this to make something extremely clear: Johnson’s anti-Semitic past isn’t composed of slightly offensive statements. They are deeply, deeply anti-Semitic. Boris Johnson is promoting and normalising the same vitriolic content that has led to anti-Jewish violence throughout history, notably in the pogroms and in Nazi Germany, amongst others. And he needs to be held to account for it.

It’s right that the Labour party are being held to account for the anti-Semitism that has plagued their party. It’s right that the EHRC report has accelerated the process by which Labour deals with its problem. And frankly, I think Corbyn deserved the suspension. It’s brilliant that this is reaching mainstream media—fighting anti-Semitism deserves space in the limelight. But it is somewhat suspect that Boris Johnson’s own anti-Semitism has been glossed over and ignored by the mainstream media. There are a couple articles in The Guardian and The Independent—but what about the rest?

And surely The Jewish Chronicles, for whom anti-Semitism is and should be a serious issue, has plastered this over its front pages? Especially considering how “the UK’s no.1 Jewish newspaper” has published consistently about anti-Semitism in the Labour party countless times (it makes front-page headlines week-in, week-out). My searches have revealed precisely one article which only reports that “Labour attacks” Johnson for his anti-Semitic tropes, rather than using its own voice to actually hold Johnson accountable.

When discussing the difference between valid criticism of Israel and anti-Semitism, Natan Sharansky wrote about the “3D” test of anti-Semitism. The second ‘d’ was “double standards”. This unveils the vital importance of consistency and systematicity. So it’s time we stopped the double standards, and held Johnson to the same standards to which we rightly hold Corbyn and the Labour party.

The Conservative party as a whole has not been innocent: the Jewish Chronicles also reported on three Conservative parliamentary candidates being investigated over anti-Semitism. Sally-Ann Hart, who stood for election in 2019, shared a video implying that George Soros (Jewish) controls the EU. She then liked a comment using the Nazi slogan “Ein Reich”.

Jacob Rees-Mogg, Leader of the House, defended promoting a video from the co-leader of Germany’s far right group dismissing Nazism and the Holocaust as a “speck of bird poop” in the nation’s history. That leader, Alexander Gauland, is the very same one whose vitriol is believed to have inspired an October 2019 terror attack wherein a neo-Nazi gunman attempted to storm a synagogue. Corbyn may be accused of cosying up to terrorists but Rees-Mogg was certainly happy to endorse them.

That’s not to equate the anti-Semitism in the Labour and Conservative parties. Nor is it to trivialise the extremely sad conclusions from the EHRC report. It’s simply to say that Johnson and the Conservatives have also had their part to play in normalising anti-Semitism, and that has to stop.

Some of what they have said is frankly disgusting: Tory Candidate Ryan Houghton was rightly suspended for saying “I do find some of the events [of the Holocaust] fabricated”. That last one in particular boils my blood. But it’s not an uncommon belief: about one-third of Americans think “substantially less” than 6 million Jews were murdered in the Holocaust. One-third of Americans comprises more people than there are in Britain. Can we talk about that, please?

And it’s not just the anti-Semitism—I haven’t even dug into the well-documented wealth of pernicious content Johnson constantly spews. But considering anti-Semitism undoubtedly dogged Labour in the most recent election and Starmer and others have finally cracked down on it, it’s time we tackled the Prime Minister’s anti-Semitism. If Long-Bailey should be fired (and, after a lot of reflection, I believe that was the right decision), Johnson certainly isn’t fit to lead this country. It’s a problem that needs to be addressed by the mainstream media, by the public, and by the Jewish community. So, my question is: can we talk about Boris Johnson’s anti-Semitism now, please?