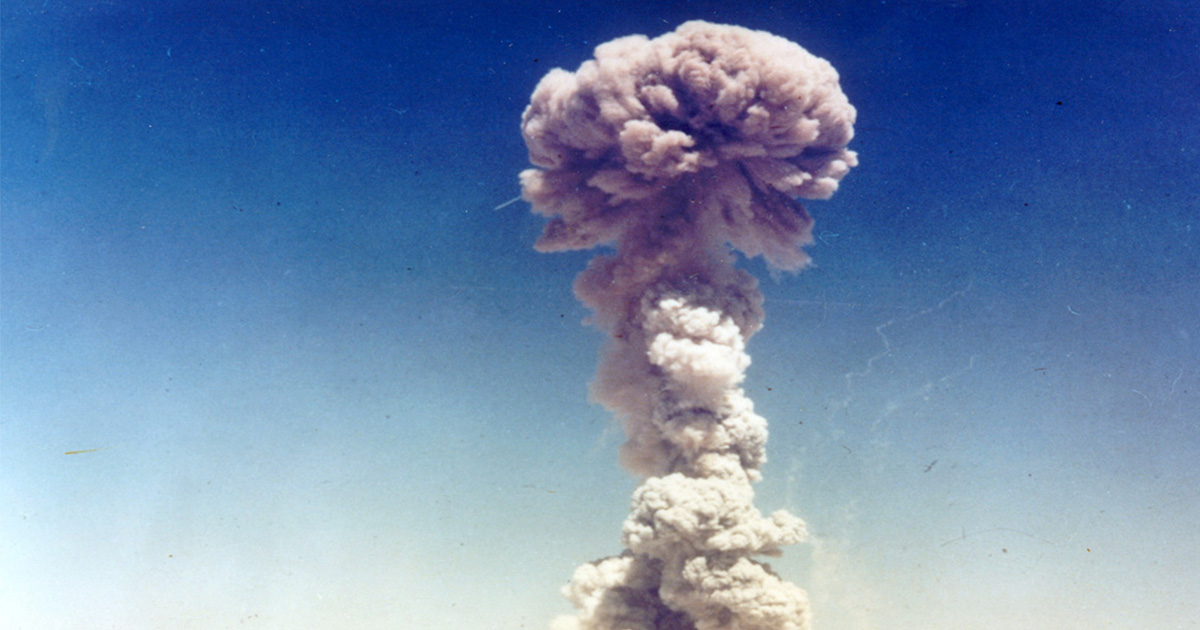 Paul Janiczek, formerly of the Bureau of Arms Control, Verification and Compliance, the US Department of State, speaking exclusively to The Oxford Student

A new nuclear treaty on the cards brings hope for the future but offers little in practice. It’s just received its 50th ratification, triggering a process to bring it into force three months later (on 22 January 2021, to be exact). On the occasion of Honduras’s ratification of the Treaty on the Prohibition of Nuclear Weapons (TPNW), the UN Secretary General’s spokesman said it “represents a meaningful commitment towards the total elimination of nuclear weapons, which remains the highest disarmament priority of the United Nations.”

Laudable sentiments, but could the treaty actually contribute to the elimination of nuclear weapons? No, I am afraid to report. What does this mean in practice? Arguably, very little indeed.

Look at nuclear-armed ships and aeroplanes travelling around the world. If the TPNW were to achieve anything, there would need to be signs of practical steps to limit movement by current nuclear powers. But how likely is it really that the commendable sentiments behind this treaty would override practical strategic concerns, such as allowing nuclear-armed planes and ships to pass through or stop in allied countries?

Yes, the treaty bans stationing the actual weapons, but not visits. Nuclear-armed bombers may not be in the spirit of things, but are not explicitly outlawed. Surely it would be the height of hypocrisy therefore if signatory states were to continue such arrangements?

Venezuela, for example, ratified the TPNW in 2018, yet hosted Russian nuclear-capable bombers during joint military exercises in December of the same year. This was in spite of the speech made by the Venezuelan Minister of Foreign Affairs, Jorge Arreaza, to the UN on the occasion of Venezuela’s signing of the TPNW, in September 2017, stating that Venezuela strongly opposes “the existence of nuclear weapons on our planet”.

Whilst the spirit of the TPNW may be admirable, therefore, there is as yet little sign that one may have any confidence in its ability to achieve any practical outcome. Countries that have nuclear weapons still will, and countries that don’t, won’t. 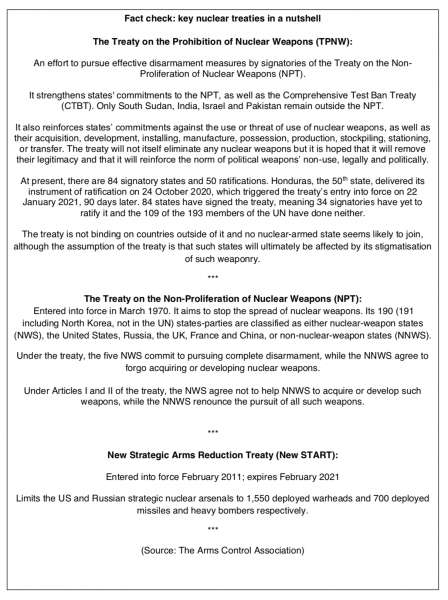 As we near the US Presidential election, our attention turns to yet another nuclear treaty in the news. The most important thing to know about New START, the New Strategic Arms Reduction Treaty, between Russia and the USA, is that it expires in February 2021 (having entered into force in February 2011). It can be extended for up to five years, or as little as one, but negotiations only started a couple of years ago and neither side seems likely to yield to the other’s demands. Were Mr Biden to enter the Oval Office, he may not have much time, given the complexities of negotiations as well as not being sworn in until January.

What follows examines what the various sides apparently want in seeking to extend the treaty, the consequences of the treaty’s expiry and the possible future direction concerning a replacement for the treaty. Along with the insights of a former senior official at the State Department, a number of foreign policy specialists and former diplomats, American and British, have been interviewed for this article.

Several months of talks between the United States and Russia stagger on. Both sides proposed a one-year extension of the treaty with a one-year freeze on the number of their respective nuclear warheads but disagree on verification.

For the Russians, the freeze would only be acceptable should these terms not be accompanied by further demands by the United States. The Russian Foreign Ministry said on 20 October that they want the extension in order to give time to “conduct comprehensive bilateral negotiations on the future nuclear and missile arms control”. This is an interesting change of position from Russia, which had previously proposed extending New START by five years without a freeze on warhead numbers or further conditions.

Speaking at the Hudson Institute, US National Security Advisor, Robert O’Brien, indicated on 28 October that “if we can get through the verification issues, I think we’re going to be able to get to a deal,” adding: “We’ll see how that plays out over the next couple of days and weeks.”

Russia’s Deputy Foreign Minister, Sergei Ryabkov, indicated that the US is asking for verification for the sake of it, while Russia has made two concessions, both to agree to extend the treaty for one year and to freeze warhead-levels for the same period. “Let them make concessions to meet us halfway: let them drop their monitoring demand,” Mr Ryabkob said to Interfax, the Russian news agency.

So, what next for the treaty? Can Mr Trump and Mr Putin make a deal before a potential change of administration and does Trump want to? Or, indeed, Putin? Could a future Trump administration agree to the treaty’s replacement with Putin? And what different approach might Mr Biden adopt from the Oval Office, if in charge?

If Donald Trump is not re-elected, he can still seek to make a deal before Inauguration Day. Should he fail to do so, Joe Biden as President would have just 16 days to seek an extension. Biden has previously indicated that he would seek to extend the treaty unconditionally.

A lot, therefore, remains up in the air. Seeking further clarity on all this, I interviewed a former Senior Advisor to the State Department, who has worked on New START at the Bureau of Arms Control, Verification and Compliance (AVC), briefing a variety of politicians from both main parties.

Q: What will happen in terms of an extension of or replacement to New START under a Trump administration? Is it right to assume there is no possibility of China’s involvement?

Paul Janiczek: “Adapting the US Russia bilateral relationship to a tripartite one is something that would require a great deal more discussion and a US/Russia unified position. There is currently no sign of China being “in the mood” to discuss this. Tensions concerning Taiwan along with continued trade talks make this unlikely.”

Q: What would be the consequences of failing to renew or replace New START?

A: “It’s hard to imagine a rush of warheads into production… building new bombers and submarines is not restocking a shelf at Tesco; the conflicts these instruments are meant to abate or avert come with a considerable warning. But a decision needs to be made in the near term on either renewal or adaptation… the resident expertise that sustains the treaty regime is not easily replicated. These people are professionals who’ve dedicated their lives to something intricate and esoteric.”

Q: Could we expect whatever may replace New START to be radically different under a Trump vs. a Biden administration?

A: “My outlook goes to it having a new twist to it under the Trump administration. A Biden administration would likely make these decisions with inordinate deference paid to European interlocutors. The desire to pull in the PRC is the next natural step by most accounts… The Trump approach varies quite a bit. Having worked for the guy, I argue his evaluation of each situation is intentionally opaque. There is no mystery to his love of making deals, and the tough talk is usually reserved for people who ‘shoot their mouths off’ first. I do not discern that kind of rivalry between Putin and Trump. I think you can expect him to try to get Putin to agree to roll in the Chinese to form a tripartite arrangement.”

Q: What might the Russian Federation be hoping to achieve during talks on renewal? Might their approach to its renewal, and eventual replacement, differ depending on who is in power?

A: “The Russians are not difficult to figure out on this… if a treaty dis-serves their interests or they can use it to game the international scene they will go with it both ways for as long as they can until they get called on it. The Obama administration and frankly the Bush administration tolerated a great deal of gamesmanship in the arena of treaty implementation… This treaty is a national security priority to the Russian Federation of the first order. The diplomats and military officers they assign to the stewardship of their nuclear deterrent are generally considered the best they have.”

Q: I also asked about the TPNW:

A: “TPNW is a heroic desire, but it is fighting history with respect to what it seeks to affect… In Ukraine, a capable if fragmented nuclear force existed after the collapse of the USSR. Kiev sincerely entertained the idea of maintaining their own deterrent as a means to ensure their continued freedom from a Russian yoke. The US stepped in with monies and together with Western states offered security guarantees regarding the sovereignty of Ukraine. Here a written guarantee was no match for a rolling tank.”

So, what next for New START? A great deal more in the way of diplomacy and discussions but no indication of outcomes.

As for the TPNW, this year is the 50-year anniversary of the Non-Proliferation Treaty. That aimed “to further the goal of achieving nuclear disarmament and general and complete disarmament”. The five official “Nuclear Weapons States”, the USA, Russia, the UK, France and China, have done nothing and Israel, Pakistan and India, who did not sign it, are certainly not going to budge on what they consider their only defence against an existential threat. The prospect of the TPNW, therefore, making the blindest bit of difference is, I predict,  just as remote.

All this is as well-meaning and as ineffectual as the Universal Declaration of Human Rights: those who applied human rights anyway still do, while those who ignored them still do.

With thanks to Mr Paul Janiczek and numerous other foreign policy specialists who spoke to me off the record.

Paul Janiczek was attached to the State Department during and between the George W. Bush and Trump administrations, including most recently at the Bureau of Arms Control, Verification and Compliance. He has briefed a variety of politicians, including then-members of Joe Biden’s staff, and worked on the New START.