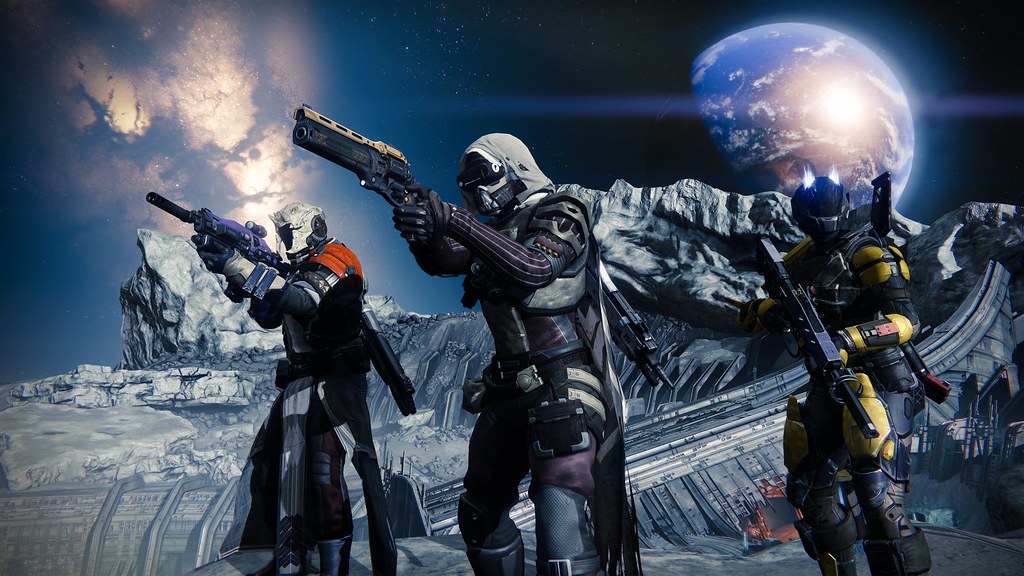 A deep dive into the Destiny Franchise

Destiny, a gaming franchise that many declared dead for over half a decade, has a thriving community and player base. Both games in the Destiny franchise, D1 and D2, have had very rocky launches. D1 was marred by behind the scenes drama that ultimately resulted in a disjointed narrative and severely underdeveloped campaign, which many gamers found disappointing given Bungie’s previous track record in creating the epic sci-fi franchise Halo. Moreover, all the good faith that Bungie had created in the community with the huge improvements on vanilla D1 over 3 years were thrown out of the window with the launch of a simplified D2 that ignored the dedicated player base of D1. Yet 7 years after the launch of D1 and 4 years after the launch of D2, the franchise is thriving. The question needs to be asked; how has this “dead” franchise still got one of the most consistent and largest gaming communities? The simple answer is endgame content, or more specifically three aspects of Destiny’s endgame content. This article will outline how the raids, exotic loot, and player versus player content, have allowed Bungie to make a successful innovative game that many developers all over the world have tried to emulate.

Without a shadow of a doubt the most important reason Destiny is still relevant today is its raids. What is a raid? It is a 6-person player versus enemy (i.e. player versus AI enemies) activity that involves high levels of both communication and team work to overcome the encounters and puzzles that are littered throughout the raid. It is a concept that has been well explored in 3rd person games such as World of Warcraft on PC, and Bungie brought this across this idea and applied it to both the First-Person-Shooter (FPS) genre and consoles for the first time. The first raid in Destiny’s history, the Vault of Glass (VoG) was the saving grace of what otherwise felt like a very shallow and underdeveloped game. If I hadn’t experienced the VoG when D1 launched I would be one of those people who call the Destiny franchise “dead”. With difficult and varied encounters and loot that was worth the grind it became the go to activity for Destiny players to do each week. The only thing that severely hampered the success of the VoG was the lack of an in-game or console based Looking for Group (LFG) platform.

By the time of the release of the next raid, Kingsfall (which many, including myself, consider to be the standard to which other raids are compared), the community created LFG websites that made finding groups a much easier task. Kingsfall built on the solid foundation of VoG with great encounters and loot, whilst also incorporating a final boss that was relevant to the story and a worthy antagonist in Destiny lore. Kingsfall was also the start of the then informal “World’s First Race” tradition for raids. It was an idea that proved so popular in the Destiny community that Bungie made it an actual event where they awarded a much coveted real life belt for all 6 members of the team that finished the raid first. Moreover, it was the raid, the Last Wish, (released 1 year after the launch of D2) which arguably saved D2 from its steep player drop off post launch. It combined everything that was good about all the previous raids and added in a mechanic where by when the first team completed the raid it changed what was a previous static world into one that changed on a 3 week cycle, unlocking secrets and new areas in the process. The raids are some of the most challenging activities in gaming and they encapsulate everything special about Bungie’s level design. I would strongly encourage anyone who has the Xbox Games Pass (which has D2 and all of its DLCs) or enough money to buy D2 and all of its content to give the raids a go.

The prospect of new secret missions and puzzles, with new DLC, to get amazing loot draws people back to the Destiny franchise consistently when they have left during a content drought.

The second most important aspect of why Destiny survived is its “Exotic loot”, or more specifically its exotic weapons, which mostly involve a great degree of dedication to acquire. This is in contrast to the armour which is acquired through random world drops, or the exotics vendor, Xur, who comes once a week on the weekend. Exotics are extremely important to Destiny’s survival; after all, what is a looter shooter without its awesome loot! What is an exotic? Exotics are the rarest type of loot in Destiny. They come with specific special abilities and they all have a very distinct identity and design. The grind to acquire them all is essential as they are useful for the fiendishly difficult endgame content. The exotic quests to acquire these godly weapons have been some of the most arduous tasks in all of gaming. From the secret missions that players have randomly stumbled upon, to puzzles that have literally required every active Destiny player to send in a personalised code to create a complete picture of a path to acquire an exotic weapon. These exotic quests are all different and uniquely engaging in their own way. The prospect of new secret missions and puzzles, with new DLC, to get amazing loot draws people back to the Destiny franchise consistently when they have left during a content drought. Bungie expanded on the significance of exotics with the addition of exotic catalysts in D2. These catalysts give an additional bonus to the already overpowered weapons and often require a lengthy grind to unlock the additional bonuses. This addition by Bungie to the exotics really helps the player feel as though they have earned the bonuses and power that come with them. It is another example of Bungie fusing elements of the MMO RPG genre with the FPS genre to create an innovative game.

Whilst Destiny is ultimately a PvE franchise, its PvP components have been especially important in helping the game survive. Unlike other looter shooter games such as Borderlands, Destiny has a super engaging (if at times also super frustrating) multiplayer aspect. It adds a whole other dimension to the game and loot. This is because not only is it a completely different type of activity that people will choose to play more than PvE, but because it is also another factor that people have when they are grinding for loot that has random rolls. In other words, people are not just looking for the god rolled PvE weapon and armour, they are also looking for the ultimate PvP rolls on weapons and armour. It is however impossible to speak of the importance of PvP content to Destiny’s survival without mentioning Trials of Osiris.

The great design of Trials in D1 allowed the competitive Destiny PvP to flourish, with Destiny PvP becoming one of the most watched things on Twitch during D1’s first year of release

Trials of Osiris, more commonly referred to as Trials, is a weekend, high stakes, adrenaline fuelled multiplayer event. The aim is to have a “flawless” run of seven wins, i.e. 7 wins with 0 losses. This is so you can reach the “Lighthouse” which is a space only open to those who have been flawless that particular weekend. It contains great and unique loot only attainable from the chest at the Lighthouse. It attracts the best of the best players and allows them to go toe-to-toe. What ups the ante even more is the fact that you will be matched with people who are in a similar position to you with respect to the wins/losses you have. So, for example, if you are on 6 wins and 0 losses, the last match before you can reach the Lighthouse, the opposing team will also be in the same position, meaning both teams have significant stakes in the outcome of the match. The great design of Trials in D1 allowed the competitive Destiny PvP to flourish, with Destiny PvP becoming one of the most watched things on Twitch during D1’s first year of release. Its also the place where many popular gaming streamers, such as Tfue, started their streaming careers before transitioning to other games. Furthermore, Bungie’s sandbox changes season help freshen up the PvP meta preventing one gun or gun type from dominating the game’s meta for its duration.

Although I have outlined the three most important aspects of Destiny’s endgame content, that allowed the game to overcome its initial difficulties, it would be amiss of me not to mention the significance of Destiny lore in preserving such a loyal player base. You might be asking why this article is now praising Destiny’s story telling when it has already mentioned the underdeveloped vanilla campaign that had a disjointed narrative. The way to overcome this apparent contradiction is not by looking at the in-game cinematic storytelling, which for the most part has been subpar (apart from the expansions that were very narrative heavy and helped to revitalise Destiny), but instead to focus on the additional lore that was initially found online in D1 but has since been made accessible in game with D2. This is because the additional lore is so rich and has enough in it to write a few hefty tomes on Destiny history. It even created a passionate sub community within the Destiny community that solely focuses on the deciphering of this additional lore.

Bungie’s innovative fusion of the MMO RPG aspects of Destiny discussed above in combination with fun and addictive FPS gameplay have allowed them to create a gaming franchise that has had significant staying power. Unlike its competitors such as Anthem or The Division, Destiny has managed to keep its head above water and sustain a sizeable community over an extended period.