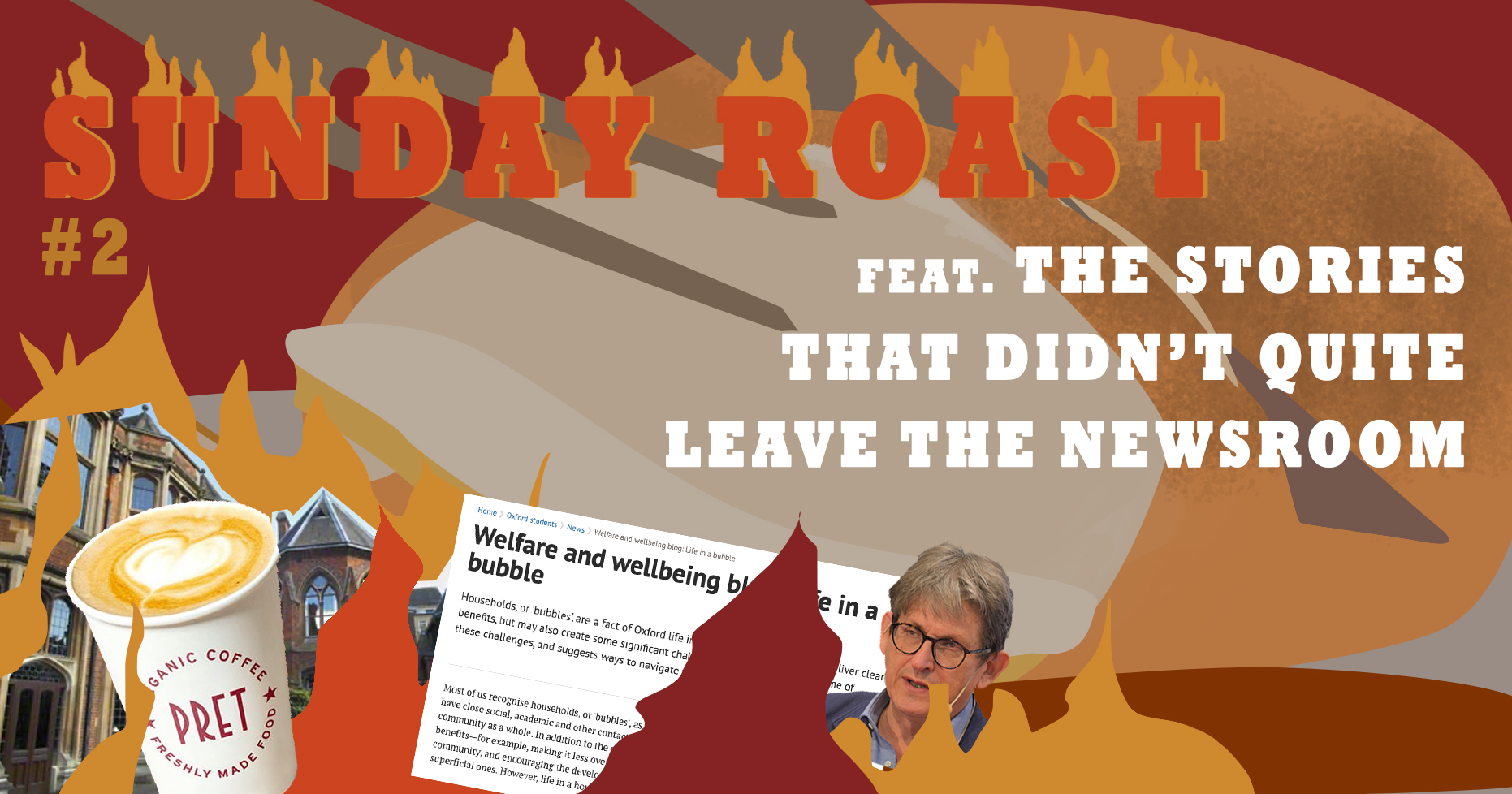 Between lockdown, election fatigue and the loss of a Pret, 5th Week Michaelmas is set to be the ‘bluest on record’ – according to Rordon Gamsay, our news editor and deep-sea trench correspondent. Fear not: the OxStu’s Sunday Roast is here to “entertain” you – and possibly even make you “laugh” – for the second week running.

Last week, it was reported that a large Boa Constrictor was on the loose in Oxford after a 7-year-old girl discovered its shedded skin next to the eastern by-pass, under the Old Road bridge.

The Oxford Student can now confirm that it has been found safe and sound within the walls of the Oxford Union. The “Rejuvenate” Slate, running for election in 7th week of Michaelmas term, expressed their relief, with a spokesperson adding that “we were worried we wouldn’t be able to put forward a replacement candidate for Librarian” was the Boa lost for good.

The Oxford Union is famed for its role on the international stage. Just this week, Steve Bannon was banned from Twitter for suggesting that disease expert Anthony Fauci should be beheaded. Although much of the world press has speculated that this was prompted by recent political rifts and the US election, we can reveal that it was in fact caused by Fauci’s appearance at the Oxford Union on the same day.

The Oxford Union did not respond to our requests for comment, and we were unable to secure the usual anonymous quote from members, who did not believe it would further their political career to do so at this time. 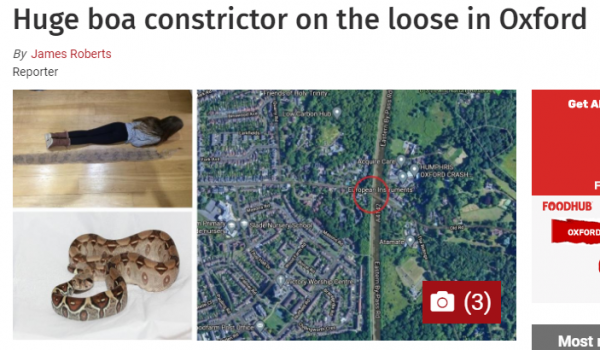 Freshers shocked to be attending University in ‘unique’ period

First-year students have expressed their shock after having been informed by Vice-Chancellor Louise Richardson on Tuesday that they were in fact attending university at a historically ‘unique’ time. The statement formed part of an email meant to comfort recipients following the introduction of national lockdown measures, with Richardson’s full statement reading, ‘you will always look back on this period of your lives and realize what a unique experience you had as university students during a global pandemic.’

Riddy Culous, a fresher at Keble College, told us that he had previously been unaware of the impact the pandemic was having on his university experience. “I’ve had 2 online contact hours so far, I’ve made no friends and I haven’t had sex since September,” he said. “I thought this was standard for Oxford students. Everyone says that all you do is sit in your room and work anyway. The Vice-Chancellor’s email really surprised me.”

Haveyn Alaugh, a recent graduate of Queens’ College, has recalled how helpful and reassuring the Vice-Chancellor’s emails were over her finals. “I can see why the freshers are so surprised, but to me, this is just another example of Louise’s supportive presence. Over March and April, she sent us personal extracts from her diary, and they were so comforting, I didn’t even care that there was no safety net for my exams.” 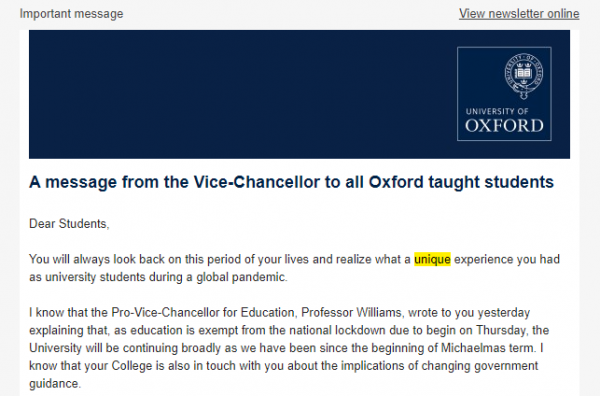 Enormous queues have gathered outside of both Pret-A-Mangers on Cornmarket Street this week, following the closure of the chain’s Westgate centre outlet. Distraught students have been pictured waiting for hours to get their gingerbread spice lattes and berry blast smoothies.

A second-year student we spoke to struggled to hold back tears as they described the impact of the cafe’s closure on their daily schedule. ‘My essay is five hours late, I’ve been queueing since 9 AM. At this point, I think I might just rusticate.’

‘Pret is an essential service – the Westgate Pret is the closest thing Oxford has to a central uni campus and I can’t believe it’s been allowed to shut down in the peak of a national crisis.’ 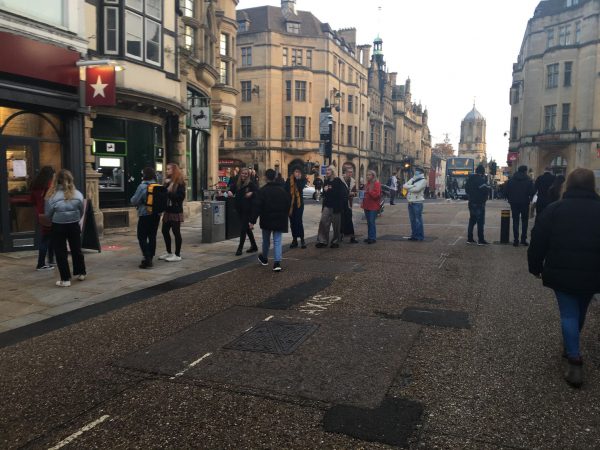 Oxford’s Lord Mayor was ruthlessly conned into joining a game of Among Us on Friday night after being cunningly invited to the event by a computer science student.

The Lord Mayor was reportedly advised against attending by town hall staff, who believed the invitation to be part of an elaborate scam. It is still not clear whether other public figures may yet fall for the rouse, with Shadow Chancellor Annelise Dodds rumoured to be the hacker’s next target. 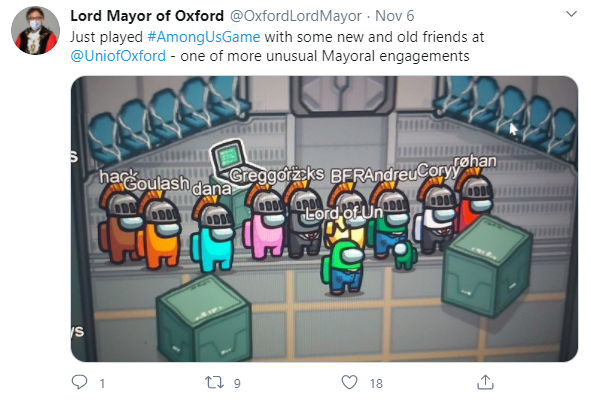 University releases advice on how to “live with other people”

The University released advice on living with others this week via its blog, which students have deemed “helpful” and “not at all strange”.

Students are advised not to “compare [their] households unfavourably to others, perceiving them as cooler, more harmonious, more fun, or more desirable in some other respect.” This advice is particularly helpful for freshers, who often live in the most run-down and cramped areas of college, with readers further advised that “appearances can deceive, and it is all too easy to compare the outside of other households with the inside of your own.”

A first-year student at Brasenose College, who prefers not to be named, describes the University’s advice as invaluable. “Before I started at Oxford, I had no idea how to interact with other people. Now I know that making a list of stuff you’re ‘glad’ about and ‘mad’ about, and presenting it to your flatmates every Friday night, is a really good way to make friends and seem cool to your peers.”

The “Oxford New” is a brand new student news‘paper’ published entirely on TikTok. The paper aims to address the underrepresentation of terrible writers amongst the student journalist community.

Last week, Alan Rusbridger – former editor of the Guardian, and current principal of LMH – announced that he would be leaving his position to pursue  “a variety of projects seeking to address the acute crisis of information and democracy which is afflicting so many societies.” The Oxford Student can now exclusively reveal the “Oxford New” to be one of his projects.

Explaining his decision, Rusbridger said “I’ve never really backed something like this before, so I am proud to finally support some good student news.”

The New’s News Editor, who prefers not to be named, told us that they were delighted to have Rusbridger’s support. “What Oxford really needs is a fourth student paper,” they said. “Really, there’s more than enough news to go around. Just last week my JCR voted to ban paper clips from mainsite, but neither River Cherwell, The OxStu, or the other one covered it.”

In order to compete with the Oxford New, we have created our own TikTok account:

Sunday Roast is part of OxYou, The Oxford Student’s satire section. Want to write for us? contact [email protected]