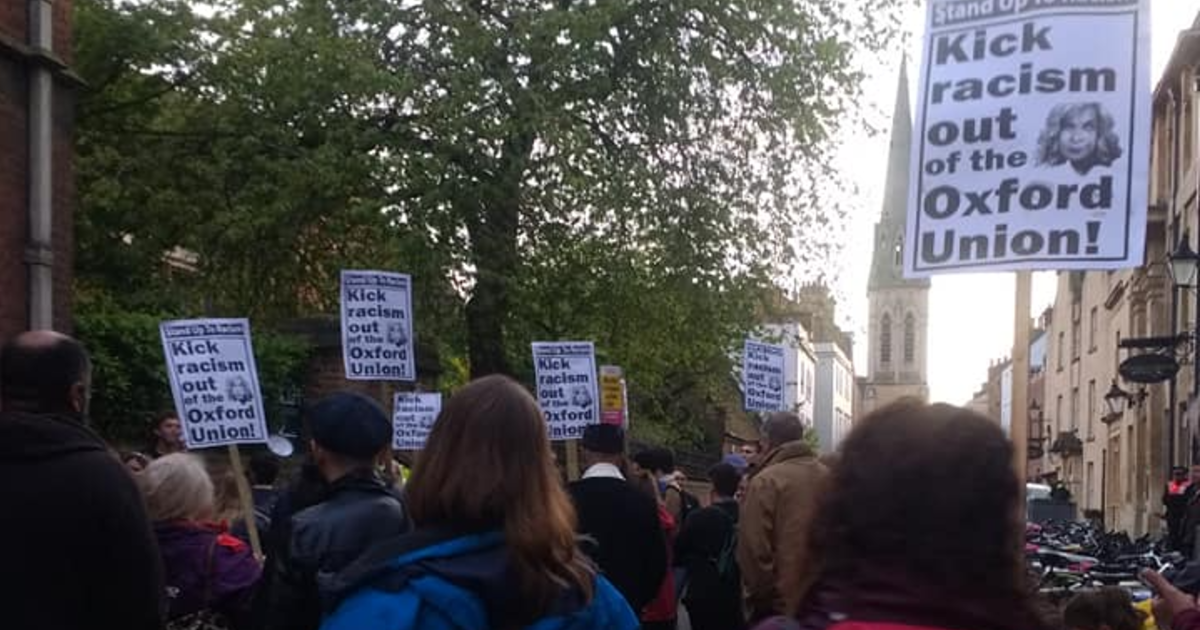 A black and white choice? On Anti-Union Boycotts

Image Description: Anti-racism protest outside the Oxford Union from May 2019

Joshua Virasami has recently posted on Twitter about his boycott of the Oxford Union, to which he was invited to speak this October. In doing so, he was ‘honouring the ongoing boycott by students and local activists’, referring to the ‘Boycott The Oxford Union’ campaign.

It is a damning indictment of the Union’s negative public image that the respected Black Lives Matter activist and author of ‘How to Change It’ would not only publicly distance himself from the world-famous debating society, but also associate it with ‘fascists and racists’. This may be all the more alarming considering how the Union likely anticipates our future political elite. Past Union presidents have, for better or worse, included politicians like Michael Gove and Boris Johnson.

As a result, we have the furore amongst the wider British media each time another controversy bubbles up from our wood-panelled depths. The last academic year was especially eventful, as several Oxford student societies generously supplied us with at least one controversy per term: Firstly, the violent removal of Ebenezer Azamati from an event at the Oxford Union in Michaelmas; secondly in Hilary, the ‘no-platforming’ of Amber Rudd by another society due to her involvement in the Windrush scandal; thirdly, the allegations which happened during Trinity term of an all-white Union slate ‘profiteering’ from the death of George Floyd.

When these events are listed like this, it is unsurprising that an individual like Joshua Virasami would be repulsed by his invitation. Many will note, as Afua Hirsch rightly did in her Guardian article, that the Union – and Oxford – “‘still has a race problem”’.

But is a boycott the right way to address this?

Supporters of the ‘Boycott The Oxford Union’ campaign would give a resounding ‘yes’. The campaign was launched in May 2019 following the announcement of far-right commentator Katie Hopkins as one of the speakers for Trinity Term that year, urging students to pledge not to attend any of the Union’s events until the society stopped hosting ‘fascist and racist speakers’.

This is so pervasive and, in many ways, so subtle, that it cannot be solved with a few boycotts or marches except as a way of raising awareness on such issues.

In a press release, campaigners stated that they ‘do not see fascism as a spectacle to be exploited for the amusement of the Union’s elite membership’. A post on their Facebook page goes further to argue that the Union must cease to ‘openly enable the online radicalisation of far-right terrorists’.

Such a campaign makes perfect sense – except that it relies on shaky assumptions which indulge in partisan rhetoric. Most obviously, the statement paints a picture of ‘Bullingdon Club archetypes’ watching the world burn at the expense of the rest of us. Yet its so-called ‘elite membership’ is less homogenous than it suggests. Yes, an Oxford Union membership is infamously expensive, but many freshers from ordinary backgrounds are pressured into shelling out, whether due to their friends, the Michaelmas discount, or the flashy termcard of the first week. I would have been sorely tempted, had my tutor not solemnly informed us that getting the Union membership was ‘the biggest regret’ sustained by many of her students.

However, the wisdom of a disillusioned tutor was not my main reason against joining. It was being at the debate where Ebenezer Azamati was physically dragged out. I remember hearing shouts and turning to a friend who serenely said, “Sometimes we don’t know what is happening.” Very soon afterwards, they, like many others, were out on the march protesting for the then-Union President, Brendan McGrath’s, resignation.

But it is not true to assume that McGrath resigned because he realised the racism implicit in his actions, or because the ‘elite membership’ of the Union is inherently racist. It is worth noting the debate at which the incident occurred was open to both members and non-members. At the time, only one or two people had called out, while most remained silent, focusing on the debate itself. It was a classic example of the bystander effect. I am interested in how this happened, why this happened, in a university famous for its intellectualism and in a city considered as a Labour safe seat. It is an event that has stuck in my mind, and reinforced the sense that I should not belong here, whether among the marchers, the society, or perhaps even the university.

How does a march or a boycott or a resignation really change the way we see the Union?

Eventually, comments from the national media describing the incident criticised the audience for doing nothing. Looking back, it would seem so painfully obvious in a hypothetical Yes/No Ethical Situation Quiz – “If a blind black man is forced out by white Union members, would you help him?”. So what happened?

Frankly, it is shameful for the university as a whole, regardless of individual beliefs, that such a prestigious society preserves a reputation for fascism and racism.

I suggest that although the Union resignations may be viewed as politically astute reactions to media exposure of mismanagement and irresponsibility, they also constitute a reductive conclusion to wider and more problematic implications of structural racism, which people are now primed – with much justification – to expect. This is so pervasive and, in many ways, so subtle, that it cannot be solved with a few boycotts or marches except as a way of raising awareness on such issues. Efforts should also be directed towards more radical changes such as enabling wider student input or review of which speakers to invite, opening up events by releasing discounted tickets for students at other universities across the UK.

Even then, we should allow that whistle-blowers, too, should not be regarded as infallible and that the framing of the report or accusation should also be subject to scrutiny. It is unproductive to entrench views of the Union as a bastion of white privilege when there are opportunities for reform. Frankly, it is shameful for the university as a whole, regardless of individual beliefs, that such a prestigious society preserves a reputation for fascism and racism.

The example of McGrath (and the controversies that follow) highlights flaws in the convention of locating fault in one person, which then functions to briefly appease the public until the next case of ‘misjudgement’ is exposed, as with the calls in Trinity 2020 for Union members to ‘publicly apologise, seek to educate themselves, and resign’. Briefly demarcating where the so-called toxic people lie in the group at fault, and consequently declaring them disposable, overlooks the cultural expectations that prompted them to behave that way, which are worth examining when racism is a recurrent issue at the Union.

To render those students as pariah figures is hardly a liberal education. Similarly, appropriating the language used to condemn George Floyd’s murderer, such as by invoking white supremacist movements, for lambasting politically foolish Union hacks, can be hyperbolic, not to mention also dangerously misleading.

This is less a criticism of boycotts or marching in themselves than of the context in which they operate – one that appears unreceptive to truly progressive motions. It is also an appeal for efforts towards less divisive discourse in an atmosphere that is already volatile.

The Union remains, teetering stubbornly between an occasional joke, a career ladder, and a taboo. As events are now largely online, perhaps this term will defy history by avoiding national headlines in favour of calm.

Image credits: @Oxford Stand Up To Racism via Facebook