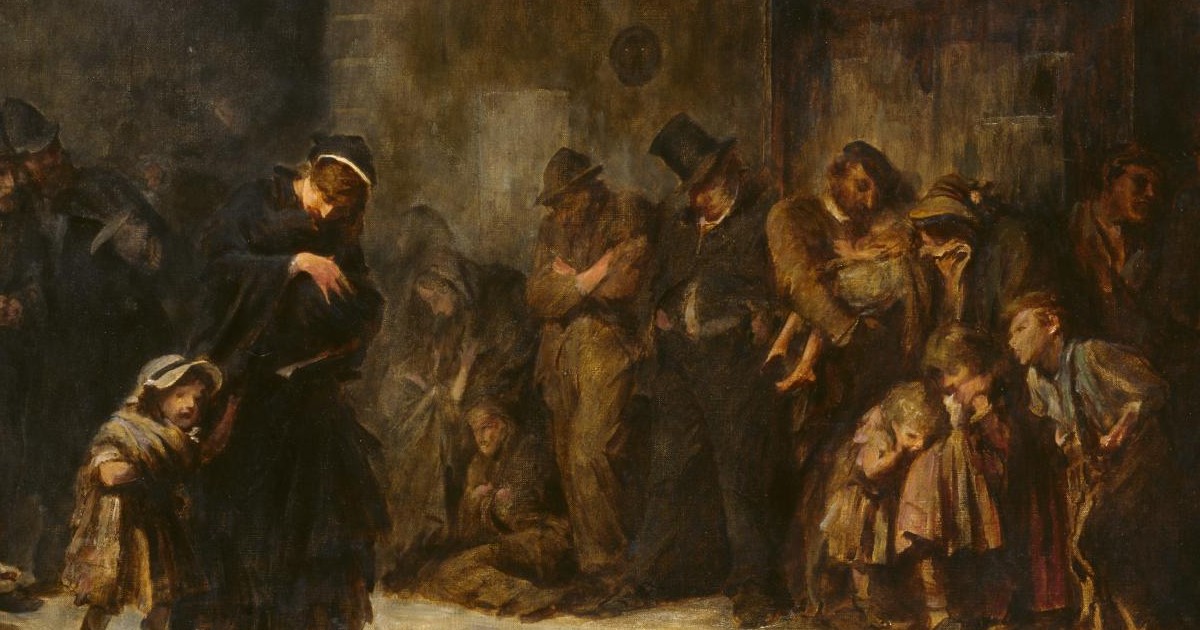 Liberalism and the poor

Image description: the painting Applications for Admission to a Casual Ward, a Victorian painting by Sir Luke Fildes. Impoverished men, women and children line up outside a police station to prove their eligibility to spend a night in a workhouse.

In my last column, I argued that we rarely acknowledge that everything in politics is scarce. Suppose instead that political agents recognised the scarcity of politics, could agree where political resources should be prioritised, and devoted their attention thither. Then politics might work much more efficiently and harmoniously, and much less wastefully.

Needless to say, that leaves unanswered the ultimate question: which issues should command our political priority? My faith offers an answer, though I suspect many might agree with me whatever their religious views.

The poor in society should be “the focus of particular concern” in the exercise of Christian charity.

Catholic Social Teaching (CST) denotes the expanding body of thought on economic, political, social and cultural issues formed over the centuries by successive Church leaders. One of its essential principles is the ‘preferential option for the poor’, which grew out of Latin America’s liberation theology movement during the 1970s, and was implanted at the heart of CST by Pope-Saint John Paul II and Pope Benedict XVI.

In a nutshell, the principle is that the poor in society should be “the focus of particular concern” in the exercise of Christian charity. God has infinite love and mercy for humans, but the Bible consistently shows Christ identifying himself with the poor and forgotten, and helping them especially in his ministry.

So this bestows social responsibilities on Christians to “embrace the immense multitudes of the hungry, the needy, the homeless, those without health care and, above all, those without hope of a better future”.

At the ballot box, the preferential option for the poor asks of my conscience: when I vote, am I thinking about how I can improve the lives of those most in need of political change, or am I voting to protect the interests of myself and others who already stand to benefit from our political system? Do I care about helping those whom society overlooks, or do I spend my time supporting campaigns of little value or consequence?

When we put the whole of our politics to this examination, we might well feel a little embarrassed at how we’re managing, not least after the recent furore over free school meals.

On the Right, it’s not uncommon for campaigners to adopt a definition of the ‘poor’ so restrictive that it conveniently shirks away some of those especially deserving of our attention, especially refugees and migrants. Alternatively, its activists sweep aside the desperate and real conditions that people face with vague and theoretical appeals to principles, dogma, and mystical notions of ‘the nation’, its ‘culture’ and ‘traditions’.

Meanwhile, on the Left, the cries to take away from the rich routinely drown out those to give to the poor. At other times, the definition of ‘the poor’ can become so fudged that the Left loses sight of those most in need of political change. Take Labour’s 2019 electoral campaign: it spoke overwhelmingly to urban, middle-class issues, from the burden of student debt to expensive railway fares. In the election, the working classes voted for the Conservatives, probably for the first time in history.

And across the political spectrum, campaigners often consciously or subconsciously place the poor second to a more prevailing concern – be that the success of their political party, the promotion of their favourite values like equality or national identity, or the triumph of their particular ideology, like socialism or conservatism.

That isn’t helpful. There are both ‘left-wing ways’ and ‘right-wing ways’ of helping the poor. The state is not an unbiased agent: it can be mobilised for the benefit of the poor or to their detriment, and in most Western countries it manages a mixture of both.

When it comes to compassion for the poor, today’s liberalism might score exceptionally low marks.

But when it comes to compassion for the poor, today’s liberalism might score exceptionally low marks. The reasons merit a separate column of their own, but in brief: not only have its leading thinkers for decades warned that concern for the poor is a thin veil for egalitarian socialism, but they have consistently rejected outright any obligations towards society’s disadvantaged, as well as any notion of social justice, whether fulfilled through government intervention or otherwise.

Meanwhile, liberalism today emphasises the right to be left alone, rather than reach out to others. You’ll be hard-pressed to find liberals talking about injustice, oppression, or inhumanity – but liberals railing against socialism, cancel culture and lockdowns are ubiquitous. That should be somewhat unsurprising: very few liberals have arrived at their beliefs out of concern for the poor, and they are more often driven by issues such as free speech, antisocialism, or disdain for the nanny state.

The unhappy consequence is that liberalism today struggles to respond to the preferential option for the poor, maintaining a reputation for heartlessness and often without much to say on what should be some of the defining issues of our time.

That is a pity. After all, just as there are left-wing and right-wing ways of helping the poor, there are liberal ones too. Liberal insights could do so much good for the global poor – if only its advocates could reflect not only on the scarcity of politics, but also revisit what the ultimate point of politics should be.