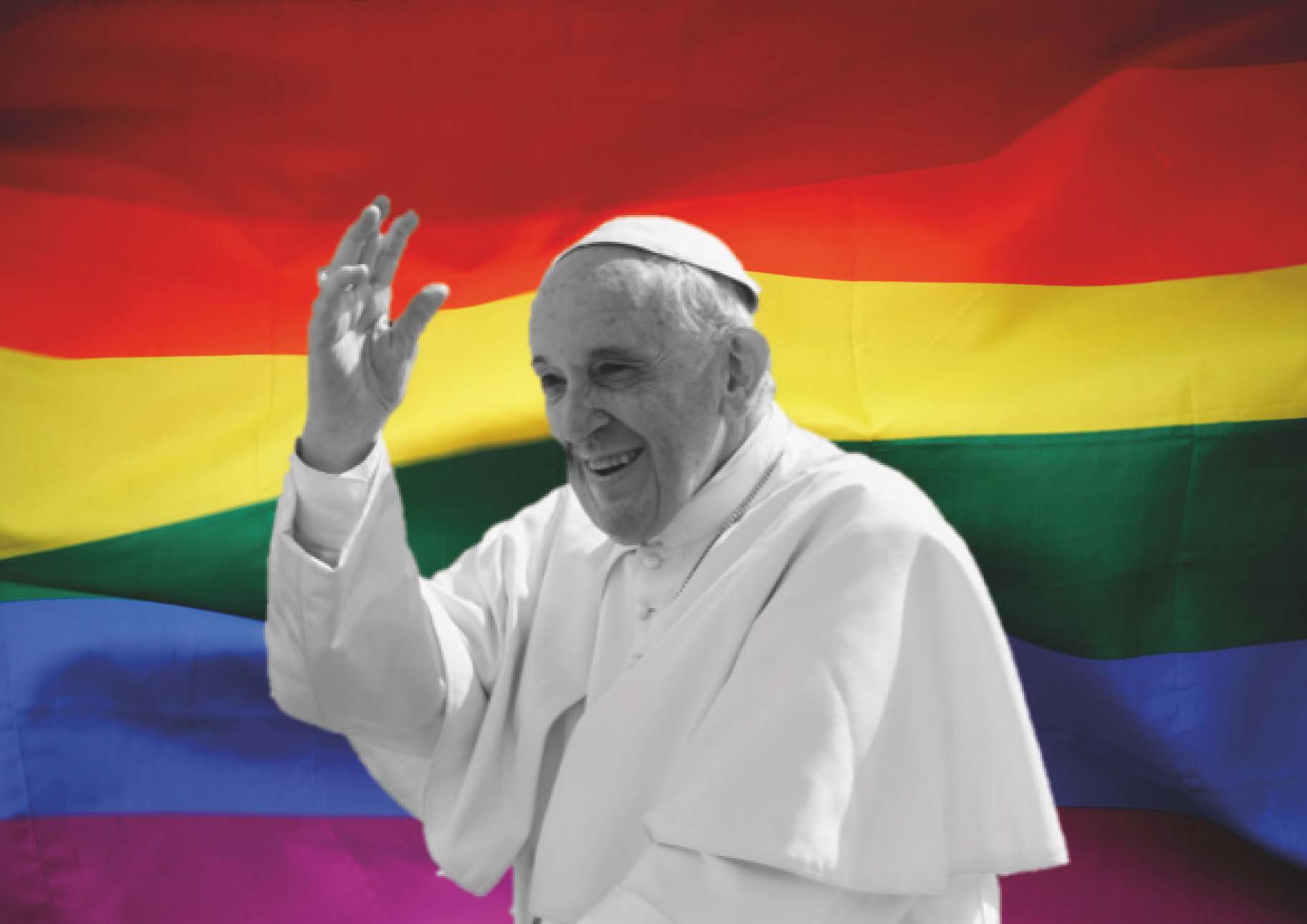 Image description: Pope Francis in front of a pride flag.

Last month, our progressively posturing Pope, Francis, made the ‘ground-breaking’ statement that “homosexual people have a right to be in a family.”

As a Queer Catholic, I’m unimpressed. To me, this is nothing more than a token gesture from a Pope who has far too frequently been lauded by liberals for the slightest suggestion of a progressive position.

We are conditioned to react to anything vaguely tolerant with disbelief and gratitude.

Of course, I do understand why for many of my fellow Queer Catholics are taking this revelation much more optimistically than I am.

As Queer people and especially as Queer religious people, we have come to expect any recognition of our existence by religious institutions to be hostile.

We are conditioned to react to anything vaguely tolerant with disbelief and gratitude. It is basically Vatican Stockholm Syndrome.

But now, today, when our community is embattled every day for our very survival, we must demand more. Even of the Catholic Church.

I should point out that I am not fundamentally opposed to the papacy of Francis. In fact, on issues like evangelisation, clericalism and the environment, I strongly support what our current pontiff has been able to achieve.

As someone who was not raised a Catholic, but came to the faith following a personal journey, though, I don’t accept the idea the Pope is above criticism.

It is to Francis’s credit that he has endeavoured to bring the laity more into the doctrinal decision-making process. I am simply voicing my personal reservations with the position the Pope has taken, something which all Catholics will know there is substantial precedent for.

My issues with the Pope’s position on LGBTQ+ rights are numerous. In part, it is the hypocrisy of this stance, on a matter that is so personally painful to me.

Francis and his allies are often keen to make much of the Pope’s record before his election on the issue. It is true that as Archbishop of Buenos Aires, he spoke strongly in favour of ‘some kind of legal protection for same-sex unions’.

But, as ever, context is key here. These comments were largely made against the backdrop of the Argentine senate debating the legalisation of same-sex marriage, something the then-Archbishop strongly opposed.

Since his election, Francis has also made similar statements considered remarkable for their tolerance. He appeared to bless a gay couple in 2015, and in 2013 said:

“If a person is gay and seeks God and has goodwill, who am I to judge?”

Yet again, these gestures come with so many attached qualifications they are rendered almost meaningless. Following his letter to the gay couple, the Vatican spokesperson was quick to clarify that the pontiff was not ‘endorsing’ their behaviour which was ‘unfit to the Gospel’.

Francis also consciously decided to meet with notorious U.S. homophobe, Kim Davis, again claiming that this meeting did not constitute an endorsement of her views. Queer Catholics must make their own decisions about the Pope’s conduct, but for me, half-baked and dialled down doesn’t cut it anymore. We need more from a leader than just ambivalence at best.

This gets at the heart of one of my other issues with the Pope’s statement: its tokenism. While on the surface, it appears to be a significant step, in reality, it is about the least he could do. Francis the statement in a personal capacity, rather than through the official channels to spark a doctrinal debate.

The Vatican again has swiftly worked to moderate the Pope’s sentiments, signalling that there would be no change in Church teachings on the matter and even going as far as to claim the pontiff’s words have been “taken out of context”.

As Pope, Francis obviously needs to carefully balance differences of opinion on divisive issues within the Church. But such a vague, mild and ultimately watered down gesture is not befitting of the one charged with jurisdiction for the Holy See.

That it should have won him so much praise from liberals both within and without the Church is indicative of the problem we face. This is still the same Pope who toes the line on homosexual activity, describing it as incompatible with Catholic faith. That such a man should have been named by The Advocate as ‘Person of the Year’ in 2013 beggars belief.

We cannot keep giving the old-guard establishment the message that these easiest gestures of acceptance, which are too often qualified with substantial intolerance, are worthy of our greatest praise. ‘Love the sinner, hate the sin’ is not good enough.

The lack of intersectionality is also disturbing. As a community, LGBTQ+ people must learn from our past mistakes and not throw out more marginalised members in the hope of personal advancement. Queer Catholics should not be so quick to champion a Pope who has openly compared gender theory to nuclear weapons.

Again, Francis has made some encouraging gestures, calling for spiritual and pastoral support for transgender Catholics, but until he denounces and actively seeks to change the dangerous and harmful rhetoric from the Church on gender, we must not back down.

His support for a Catholic safe house for trans women in Argentina, opened earlier this year by the Carmelite nun Sister Mónica Astorga Cremona, was undoubtedly an important and meaningful step. We should not try to downplay the good such initiatives will do. What we must not do, though, is leave anyone behind. Especially those who are the most vulnerable.

Of course, I recognise the fears that some Queer Catholics will have. Push too hard during a progressive Papacy and we are likely to find ourselves contending with a reactionary conservative to follow.

I would challenge this though. If we have learned anything in recent years about the LGBTQ+ struggle, it’s that we cannot afford complacency. Even major victories, like same-sex marriage in the U.S., remain divisive enough to be taken away.

Ultimately, I believe that Catholicism is not about blind adherence to hierarchy, but about standing up for what is right, no matter the cost, as Jesus did. Being persecuted for principles is not a new experience to Catholics of any stripe. I would argue that to be Queer and Catholic is to struggle in part because to be Catholic is to struggle.

As Catholics, we have always had to embrace the need to stand against institutions of oppression. Queer Catholics, with our lives and those of our community on the line, cannot afford to do otherwise, even when the institution is the Church itself.