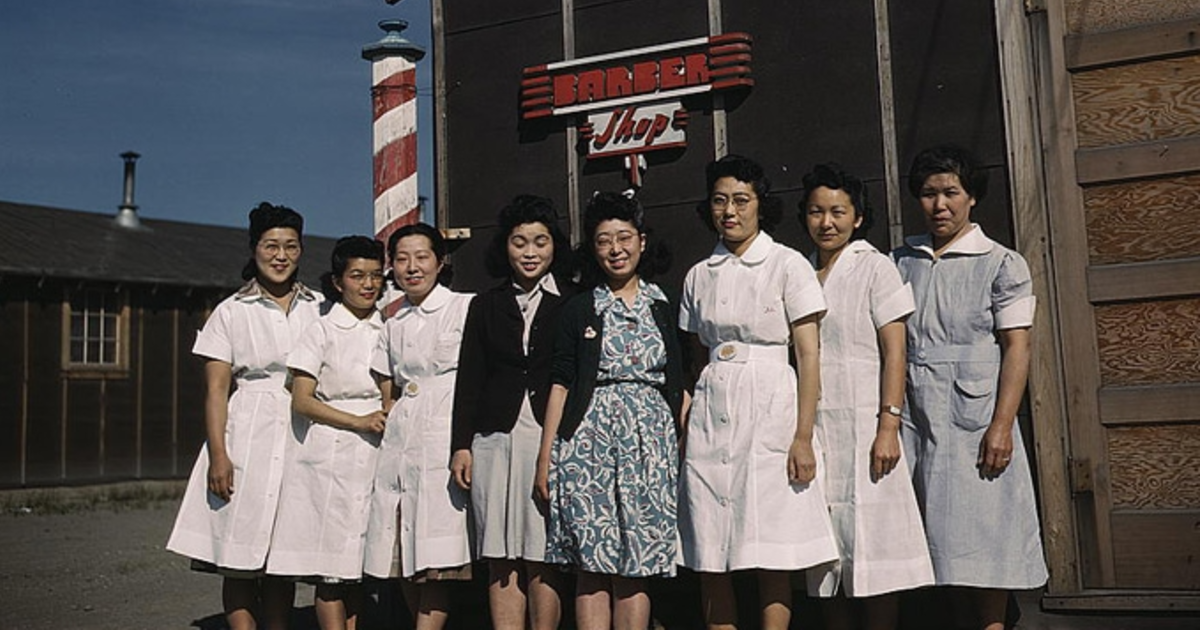 Image Description: Women pose outside the barbershop in the Tule Lake Relocation Center, in Newell, California in 1942 or 1943. 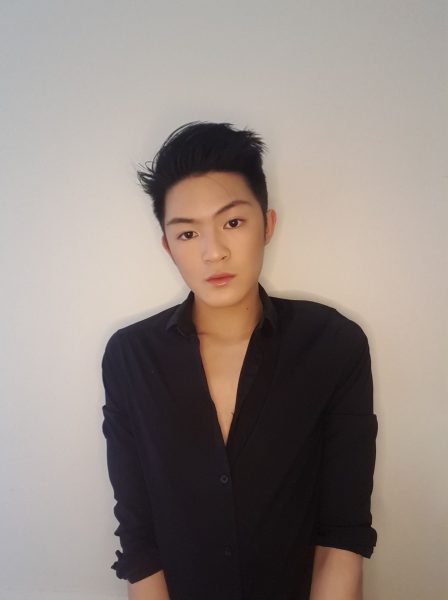 He didn’t stop walking. I vaguely knew his name but we hadn’t had many interactions. I kept walking too. Behind me I could hear sniggers and a few imitations of stereotypical kung fu noises. My ears burned but I didn’t respond.

This kind of thing used to happen quite often at school when I was younger, and fizzled out as we approached the last few years. I knew it wasn’t a compliment and that it was probably related to the fact that I’m Chinese, but never connected that fact with the assumption that that’s how I sounded. I was born and raised in Sheffield, just like almost every other kid at that school – why wouldn’t I speak just like them? It’s clear to me now that they weren’t doing this because they thought I couldn’t speak English; even if they didn’t know me well, they’d certainly heard me speak before and knew that I have an extremely neutral accent, especially for Yorkshire. This was a prime case of othering, of making someone else feel excluded for being different, except that this didn’t even make sense to me.

What’s so powerful about the (non-)word ‘herro’? Elizabeth Peterson, who teaches English sociolinguistics in Finland, writes that language ‘is one of the most important and revealing social manifestations of who we are and where we come from’ and that ‘to criticize someone’s language assumes a position of superiority and a right to judge that person’. This is something that applies to English in particular as, without doubt, the most colonial language; the assumption seems to be that, as heirs to the language, they had more of a right to be there than I did, the son of two immigrants. This isn’t logical, and yet I can’t say it didn’t somehow make sense to my little seven-year-old mind.

Designating a certain way of speaking English as ‘bad’ allows native speakers to keep other people from belonging, something that British people are extremely good at doing.

But can I really say I haven’t done the same? Growing up I was surrounded by Malaysian and Singaporean university students who spoke confidently and with fluency but had very obvious accents, unusual intonation, and liberally added Singlish particles such as ‘hor’ or ‘meh’. I recall being told regularly, in response to my rejection of spicy food: ‘try try lah!’ Having grown up with and internalised the mindset of my white peers, that people who speak ‘good English’ are superior to those who speak ‘bad English’, I then tried to perpetuate it among these students.

I would correct sentences that were clearly articulated and perfectly comprehensible, but not technically right. It’s not ‘hah why every time ice woh-ter?’ in your Malaysian accent, it’s ‘why do you always order ice water?’ in a nice British accent. They were always extremely good-natured about it, in a way that I definitely didn’t deserve. Imagine being a twenty-year-old university student, fluent in three or four languages (English, Malay, Mandarin, and sometimes Cantonese), and having an impudent thirteen-year-old pointing out that your grammar isn’t quite right, a boy who can barely speak the language of his parents.

It’s one of those colonial vestiges that British people are among the laziest when it comes to learning other languages, but will happily treat with disdain those who are trying to learn English. Even people who have attended classes for years and passed numerous language exams are not truly accepted because of their accents, even if it is just a slight lilt that betrays them as foreign. Designating a certain way of speaking English as ‘bad’ allows native speakers to keep other people from belonging, something that British people are extremely good at doing.

My switch to English changed the power dynamic completely, as if I was suddenly more important.

One memory stands out strongly to me. I was eighteen, and travelling back from Hong Kong by myself for the first time, with luggage that was 6kg over the weight limit because of the numerous gifts the aunties wanted me to take back and distribute to the UK side of our family. I was nervous at the prospect of being heavily penalised by the airline, but my mum told me to smile widely and to speak English. When I got to the counter, the hostess recognised me as Chinese and addressed me in Cantonese; I replied in my very best received pronunciation, which would have sounded quite heavily exaggerated even to a Brit. She was quietly surprised, but switched to lightly accented English and allowed me to check in the overweight luggage.

Although I was gleeful about bypassing the rules at the time, the encounter has stuck with me for a different reason. My switch to English changed the power dynamic completely, as if I was suddenly more important. The difference between us became excessively apparent, almost palpable – even though we were both Chinese people, language somehow created a cultural slope, with me on the high ground. The worst part is that the hostess was just speaking the language native to the city we were in; I was essentially the foreigner, and yet I was being treated with more respect because she thought I could only speak English. It was disquieting.

In 2016, the UK government carried out the Casey review. This investigated opportunity and integration, and found that 95% of people living in this country think that to be considered ‘truly British’ you must be able to speak English (an increase from 86% in 2003). 87% of people with English as their main language felt they belonged strongly in Britain, compared to 79% of people without. Perhaps this kind of statistic isn’t surprising to you; after all, people who live in England should speak English, right? But consider the fact that most of those who don’t feel like they belong are actively being excluded, and yet are fighting hard against it. Even people like me, who were born here, have lived their whole lives here, and have every reason to belong here – including ‘good English’ – will never be viewed by some as more than a poor imitation of a true Brit.