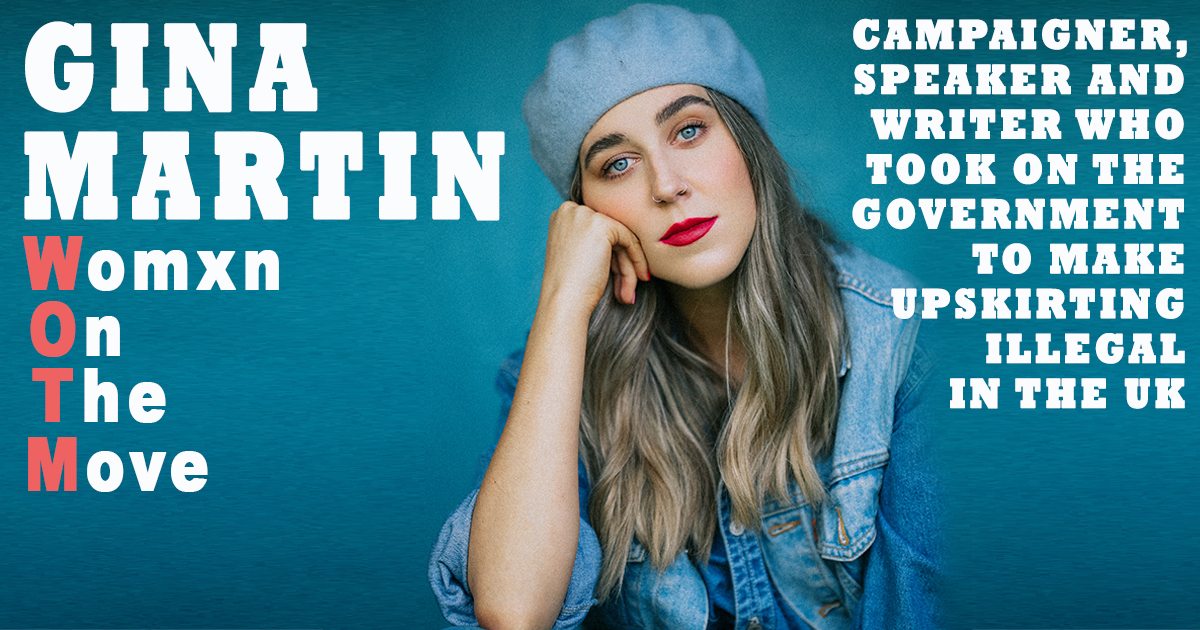 Womxn on the Move: Gina Martin

Image Description: Gina Martin in front of a blue background

Next up in our ‘Womxn on the Move’ series is Gina Martin: campaigner, speaker and writer who took on the government to make upskirting (taking a sexually intrusive and non-consensual photograph up someone’s skirt) illegal in the UK following a horrible incident in which she experienced it first-hand. Following her eighteenth-month campaign she successfully changed the law in England and Wales and has continued with her activism with a number of different projects. I had the chance discuss with her all things gender equality, the pros and cons of activism and her plans for the future.

In your opinion, what makes an activist? How do you think activism has changed since you started your campaign?

An activist is someone who pushes for social progress consistently and strategically. I think activism is in a renaissance and we’re really seeing the birth of a new type of activism online but I do believe it has to be online and offline. The stories you post about Black liberation don’t matter if you’re never speaking when your friends or family parrot racist opinions.

Your upskirting campaign came out of a horrific incident in which you were upskirted at a music festival. After 18 months of tirelessly campaigning, in 2019 you successfully passed a law in government to make upskirting a criminal offence in the UK. What was your immediate reaction when the government finally confirmed a change in the law?

It was an odd one because I’d been in and out of Parliament for almost 20 months by the time my family and friends and I all squeezed into the gallery to watch our bill pass its last stage at the House of Lords. When they passed it, it honestly just felt like relief. I don’t think anyone truly realised how much you have to be on it every second of every day to get a law passed and so when it happened I just felt relived and a bit numb. But then we went to a pub to celebrate and I obviously drank too much red wine and cried a lot.

Your campaign has been key in sparking bigger questions about gender and how society views women. Where do we go from here to change society’s perspective and treatment of women?

I think, wholeheartedly, when we discuss gender equality we need to realise that the treatment of women isn’t coming from society, it’s coming from men and the patriarchy. I know so many wonderful men. But they’re not naive enough to disregard this entire problem just because they’re not part of it. Women are one community affected the most but that our work to create gender equality has to include trans women and people of all marginalised genders. We are all suffering at the hands of a society built by and for one community: overwhelmingly, white privileged men. That’s the history. That’s the fact. Honestly when men do the work and get involved too, that’s when stuff fast-forwards. Without Ryan (Gina’s lawyer) advocating for me in a primarily male dominated space (Parliament) I wouldn’t have even got in the room, never mind at the table. We need men to be pacing up the books, and listening and then working with women and marginalised genders as accomplices to deconstruct a system their community built. Women will never be able to solve a problem on their own that they didn’t create. When guys call out stuff they see they raise the bar for everyone.

You wrote your book, Be the Change, to give young activists the tools to be able to run an effective political campaign. What was the biggest lesson that you wish you had known when starting out with your campaign?

I wish I had realised that being an activist and campaigner is about always being two steps ahead of those you’re trying to hold accountable. When you make that your rule, you’re more likely to succeed. I also wish I knew not to trust anyone you’re trying to hold accountable. Too many campaigners are told by those in power that their ask will be done and then they sit back. Everything in this game from powerful people is lip service and optics, not action. You have to continue to manipulate and push all the time.

How do you deal with the mentally and physically exhausting aspects of operating in the political sphere as a woman?

I lean very heavily on the people around me. No one is an island. If you’re a young person reading this, don’t buy into the idea that you do it all yourself and you wake up every day wanting to ‘SLAY IT!’, that’s not true. It’s hard and you need to be honest about your strengths and your shortcomings and partner with people to plug your gaps. You also really need to talk, vent, rest, cry, and ask for help. Honestly that is the only way you win. Your support system is there for a reason. Make it bullet proof! Demote friends who make you feel bad and only have people around you who make you feel full. I relied on my family and partner so heavily during campaigning. They picked me up when I thought I was done.

You recently started a podcast with your sister, Stevie Martin, called Might Delete Later, which was inspired by your opposing views about social media. What has been your experience of using social media for your campaign? How has it helped or hindered different aspects of your work?

Social media was everything to my campaign, without it I wouldn’t have got any media contacts (stalking on Twitter!), wouldn’t have a petition (which started on Facebook with my friends and family!) I wouldn’t have been able to tap into the community of people affected by upskirting and rally them! Social media has made campaigning so much easier, but it is still a skill! It hindered me mostly because I’ve received rape threats and abuse for the entire period of campaigning. I’d always though that would be hard but it really affected my view of the world. It made me scared. I wish there was more protection for women online.

As a full-time activist and writer, what have you found to be the best and worst parts of your job? What advice would you give to young activists navigating these pros and cons?

Best would be always learning every single day and being able to prioritise my self-education – that means I learn in fast forward! I’ve also met the most incredible people and all my peers do a similar thing to me so it has made me realise how many extraordinary, kind people there are in the world! Worst would be the pressure. After you change the law there’s huge pressure to do more. That’s a huge first win, and I always feel like I’m not living up to the things people call me in the media – but I guess whatever job we’re in we can feel not good enough. That’s probably part of being a woman in the public eye too. My advice for young activists would be work on your campaign or self-education little and often, every day! Self-educate on structural  issues like race, gender and human rights and don’t just read those books… study them! Take notes! Be curious! Self-education is the single most effective thing we can do to progress society, but remember, if your world view leaves people out it’s only a view that works for some, but not others!

Following the success of your upskirting campaign and subsequent projects, what are your future goals for your activism?

I used to have goals but I now know my activism is organic; you can’t make a project up out of thin air. For me I see things, and I react. For instance, at the moment I’m working pro-bono for Nyome Nicholas-Williams, a model who had her photos taken off Instagram over 500 times and her account threatened to be closed for ‘violating community guidelines’. She is a plus-sized Black woman and her artistic half-nude images actually didn’t violate the guidelines at all. Hundreds of slim white women are on Instagram every day (check the @playboy account), so we challenged Instagram and ran a campaign that got national press attention. Now we’re working directly with Instagram CEO, Adam Mosseri, and his team to figure out a policy change. That’s the kind of thing I do: I ask, ‘How do we get the public, or the right community to care about this issue and put pressure on this person?’ Then, ‘How do we form a relationship with them so we can engage them and encourage them to change this thing?’

Find the thing you love and have fun, take risks and get creative finding a route into the industry. Creates your own stuff on the side, too. If you don’t love doing it you’ll never really be fulfilled.

Volunteer at least once with a community you’re not from. Put yourself in a situation you’d never be in normally, ask questions and see how it changes you for the better.

Read: If I Could Tell You One Thing… By Richard Reed (a book of the one most important piece of advice from the world’s most amazing people).

Watch: Knock Down The House on Netflix (hope, determination and humility is everything, and this is a great example of how you succeed in the face of everything holding you back).

Listen to: Ted Talks Daily podcast. Aaaaalways gets you inspired. Don’t pick and choose, just roll through and open up your horizons!