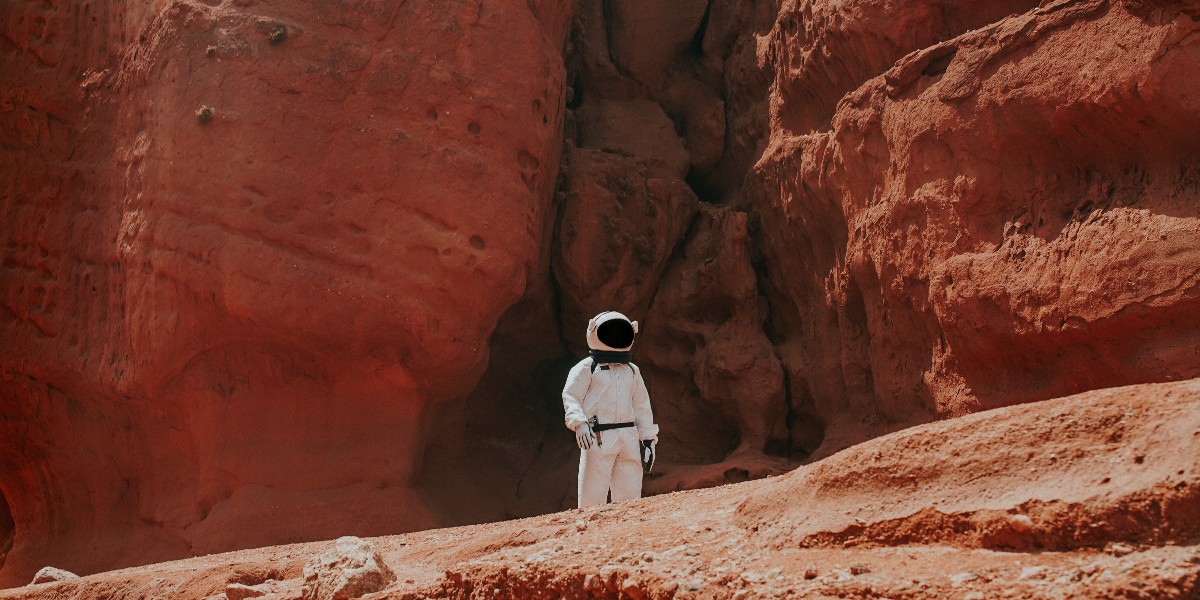 Among Us: The Ultimate Imposter Syndrome

Image description: A person dressed in a space suit standing in front of cliffs.

As you start the game, the screen goes black and a low discordant tone plays. Before you, a line of brightly coloured, cartoonish space suits appear. “Crewmate,” it reads, “There is one imposter among us.”

The gameplay of Among Us is simple: you are an astronaut on a spaceship which is slowly falling apart. It’s your job to put it back together by completing tasks – minigames which are scattered throughout the ship. However, your crew is not everything they seem: there are between 1 and 3 Imposters among you, whose aims are to sabotage your ship and kill you all.

As a Crewmate, you have to complete your tasks before the Imposters outnumber the crew, or work with the group to vote out any suspicious people, one by one. As an Imposter, you have to sneak around, faking tasks like a crewmate, and kill off the each of the crewmates. Both of these roles can be great fun and you find yourself flung between deceit and deduction on a game-by-game basis.

Of course, it never goes that simply: instead you descend into anarchy. Accusations fly: no one is above suspicion. People scramble to try and prove their innocence – or to prove that others aren’t innocent. The system of voting, where anyone who gets the most votes is ejected into space is chaotic and often means that crew members are voted off – especially when an Imposter knows what they’re doing and can cast suspicion elsewhere.

Among Us was first released in 2018 by indie game studio InnerSloth and did not attract much mainstream attention but suddenly shot up in popularity from mid-2020, becoming the most downloaded app on the iOS app store in October. Popular streamers and YouTubers latched onto it, and since then a huge fan community has sprung up, with memes, art and videos only spreading the game further. Recently, even U.S. Representatives Alexandria Ocasio-Cortez and Ilhan Omar livestreamed themselves playing with popular streamers in order to encourage people to vote in the U.S. election, drawing over 700,000 viewers on Twitch.

There’s a genuine joy in running around the spaceship, fixing the broken elements and it’s easy to figure out, which makes it accessible to anyone, at any level of gaming.

Part of the charm of Among Us is the juxtaposition: graphically it’s fun, running around as jellybean-like cartoon astronauts. Although it’s simple, the bright colours, use of animation and sound effects come together to make doing tasks a satisfying experience. There’s a genuine joy in running around the spaceship, fixing the broken elements and it’s easy to figure out, which makes it accessible to anyone, at any level of gaming.

But underneath the bubbly 2D style, there’s a sense of ominousness. The music and certain sound effects work amazingly to create a sense of suspense, always hanging over you. Bad lighting, static, intermittent disasters and sabotages, and the knowledge that anyone one of these friendly-looking avatars could abruptly kill you, all adds to the impending feeling of doom. The game is the final act of a sci-fi horror movie – all the build-up and mystery happened earlier – and now you have to find the alien, or die. Even the comedic death sequences and ridiculous hats don’t take away the frustration or tension that builds up as you play.

However, Among Us’ main appeal is that it’s a fundamentally social game. It’s all about who you’re playing with, what choices they make, and how much they are hiding. The chats that pop up every time a body is reported, or emergency meeting is called, are one of the most intense moments, as you desperately try to figure out who should be voted out.

However, Among Us’ main appeal is that it’s a fundamentally social game.

It’s a game about trying to assess what other people are doing, if they’re safe or acting ‘sus’ (short-hand for suspicious). It’s the roller-coaster of building trust, forming cliques, and then being tragically betrayed which is the cornerstone of Among Us. After a year of lockdowns, it’s human interaction at its most intense and unpredictable, a game about deception and deduction.

Among Us manages to tap into a sense of anxiety which is all-too familiar right now: of mistrust and the sense that there is danger among us. Except in Among Us, it’s fun, solvable, and ultimately inconsequential. It works through those fears and lets you win, and spend time with friends. Considering all that, is the sudden influx of popularity really a surprise?