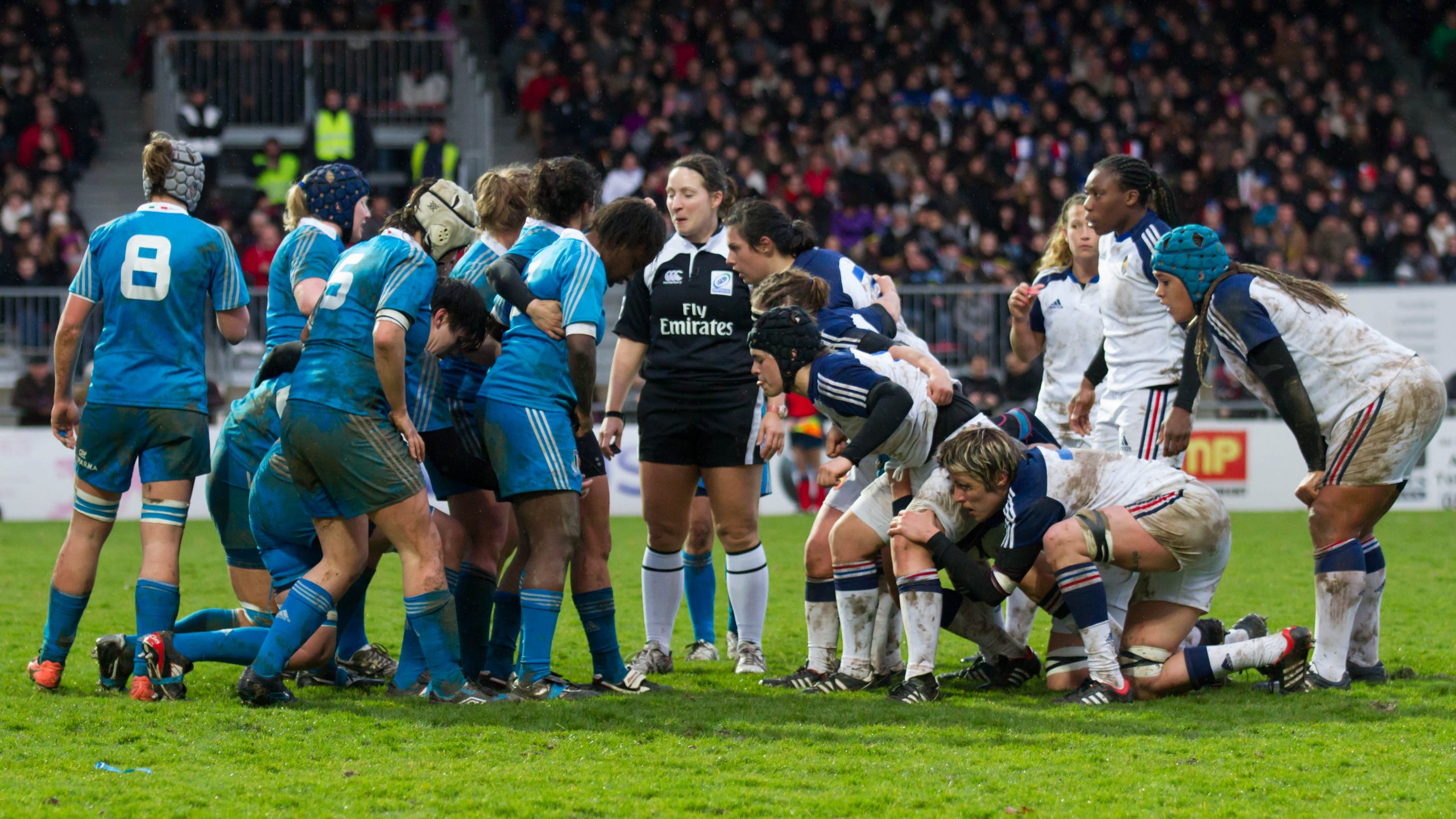 A year of women in rugby union

Women’s rugby is on the rise, both domestically and internationally. The COVID-19 pandemic has certainly interfered with progress, as it has in all sports, and sadly the women’s game in England was more adversely affected than the men’s. For instance, the 2019/20 season of the Women’s Tyrrells Premier 15s (now rebranded as the Allianz Tyrrells Premier 15s) was cancelled, where the Gallagher Premiership was not. Similarly, unlike the men’s league, the women’s game in England has restarted with adapted laws: reduced 35-minute halves, and rule changes to avoid scrums as much as possible. Nevertheless, progress is happening.

Attendance at women’s rugby has been seeing record growth in recent times and showed no signs of slowing down before the advent of the coronavirus. The ‘Game Changer’ event, aimed at promoting the women’s game, drew a record crowd for a club fixture of 4,837 in the 2018/19 season. This year’s instalment of the ‘Game Changer’ series was supposed to take place at the Stoop stadium – the same ground that drew another record attendance of 10,974 for the international 6 Nations fixture between England and Wales. We can only speculate as to what sort of impact this momentum might have produced in the club game, but the trend is certainly up.

On the international stage, women’s rugby has always had a relatively fast rate of development, though it is certainly not where the rugby community would like it to be. The first Women’s Rugby World Cup was held in 1991, just nine years after the first-ever international women’s rugby fixture was played. The most recent progress in catching women’s rugby up with the men’s game comes with the official renaming of the world cup: from 2021 onwards, both the men’s and the women’s rugby world cup tournaments will all be known as the Rugby World Cup, differentiated only by the year in which they take place.

This was no doubt a shift of historic and pivotal significance. Nevertheless, it raises the question of how much progress we can expect to see if the sport remains amateur, or even semi-professional

However, there is still a long way to go until parity is achieved. Astonishingly, England is still the only country in the world with a fully professional national side, after 28 players were offered full contracts in January 2019, for which the money was permanently included in the RFU budget. Though most players do not receive payment for playing in the top flight of English rugby at club level, either from their clubs or from the RFU, this was no doubt a shift of historic and pivotal significance. Nevertheless, it raises the question of how much progress we can expect to see if the sport remains amateur or even semi-professional.

New Zealand also signed 30 of their national rugby team, the Black Ferns, onto semi-professional contracts in 2018, and the French women’s squad is likewise semi-professional. Given that every single Women’s Rugby World Cup (with the exception of the inaugural competition in 1991) has been won by either New Zealand or England, and England have this year won their second consecutive Grand Slam in the 6 Nations, some serious and potentially damaging disparities could start to develop between these trailblazing teams and the rest of the pack if we do not see similar progress elsewhere. Women’s rugby 15s is far behind 7s in this regard, after the Netherlands offered their women professional contracts back in 2011, and were quickly followed by Australia, New Zealand, Ireland, South Africa, Canada, the US, Russia, Spain, and eventually England in 2014.

Huge strides have been made this year in the immediate vicinity of the pitch by female rugby officials. Sara Cox, in particular, made headlines in August for being the first woman to officiate a Premiership Rugby match as one of Wayne Barnes’ assistants, but trailblazing has been far from new to her in the past.

A former player herself who trialled for England U21, Cox’s playing career was ended by injury aged just 17, leading her to pick up the whistle instead. Having already officiated at the Women’s Rugby World Cup in 2014, she was centrally contracted by the RFU and became rugby union’s first professional female referee. In the same year, she was the only English referee sent to officiate at the Rugby Sevens in Rio de Janeiro for the Olympic Games. She has refereed international women’s fixtures, including the final of the women’s Sevens World Cup, and has served as an assistant referee in international men’s fixtures.

Neville has been confirmed as one of the Television Match Officials during two fixtures of the upcoming Autumn Nations Cup, specifically Wales vs. Georgia and then Scotland vs. Fiji the following weekend. This will make her the first woman to take on these duties in a top level international men’s fixture.

This year also brought further success for another female referee, Joy Neville, who was also a former player and has similarly spent the last few years blazing trails in the game of rugby. Having refereed the Women’s World Cup Final in 2017, by 2018 Neville had become the first woman to referee a Pro14 match, which also made her the first female referee of a top-flight men’s rugby union fixture in the history of the United Kingdom.

A year before this, she took charge of a group stage fixture in the European Rugby Challenge Cup in 2017 – this was not only unprecedented in this tournament, but this made her the first female to referee any professional European rugby union fixture. She repeated this success in the following year, refereeing no fewer than three Challenge Cup matches in the 2018/19 season.

Neville compounded this success by adding to her own record this summer, becoming the first women to hold the flags during a Champions’ Cup quarterfinal. Perhaps most spectacularly of all, Neville has been confirmed as one of the Television Match Officials during two fixtures of the upcoming Autumn Nations Cup, specifically Wales vs. Georgia and then Scotland vs. Fiji the following weekend. This will make her the first woman to take on these duties in a top-level international men’s fixture.

I would be remiss now not to mention the achievement of Anna Bidgood, who has just finished her PhD at the University of Oxford. When Anna took charge of the college fixture between Worcester and Christ Church in 2019, she became the first woman to do so in the history of Oxford University. Anna was recognised for this online by none other than Nigel Owens, who is himself set to become the first referee ever to take charge of 100 Test Matches when he officiates France vs. Italy later this month.

Sadly, the women’s game has also suffered setbacks over the course of 2020. One of the biggest scandals the game saw this year came in August with Canterbury’s kit launch for the Ireland international teams. For the photoshoot, Canterbury used three players from the Ireland men’s team – Connor Murray, Robbie Henshaw, and Bundee Aki – smiling and relaxed, in full playing kit. The women’s kit, however, was promoted not with players but with models, sporting trousers and steely expressions.

The decision was greeted with backlash and outrage, spear-headed by Wasps Ladies’ player Florence Williams. The response was described by the Telegraph as the “biggest online one-day movement in the history of the sport”, and included a deluge of female rugby players proudly uploading pictures of themselves in their kit, accompanied by the hashtag ‘I am enough’.

Alongside these photos was a blank image adorned with the text “Because role models are real models. We are more than enough & we’ve had enough”.

“It matters”, writes Fiona Tomas of the Telegraph, “because using overtly feminine, skinny models in place of powerful, robust, strong women not only sends completely the wrong message to young girls playing the game, but it denies the sport vital exposure”. She points out that globally, women’s rugby is growing by 28% annually, and belittling errors of judgement such as this will have no place as the game progresses.

Elinor Snowsill, of Wales and the Bristol Bears, put out a firm response to this controversy. The Bears used a variety of players for their 2020/21 kit launch: in one of these, Snowsill and two of her teammates sport the new kit alongside stars of the men’s side, including international superstar Semi Radradra. “Sponsors, clubs and unions take note”, Snowsill wrote in an online post, “This is what a kit launch should look like. It’s really not hard. We have had enough of sexist double standards in sport”. Alongside these photos was a blank image adorned with the text “Because role models are real models. We are more than enough & we’ve had enough”.