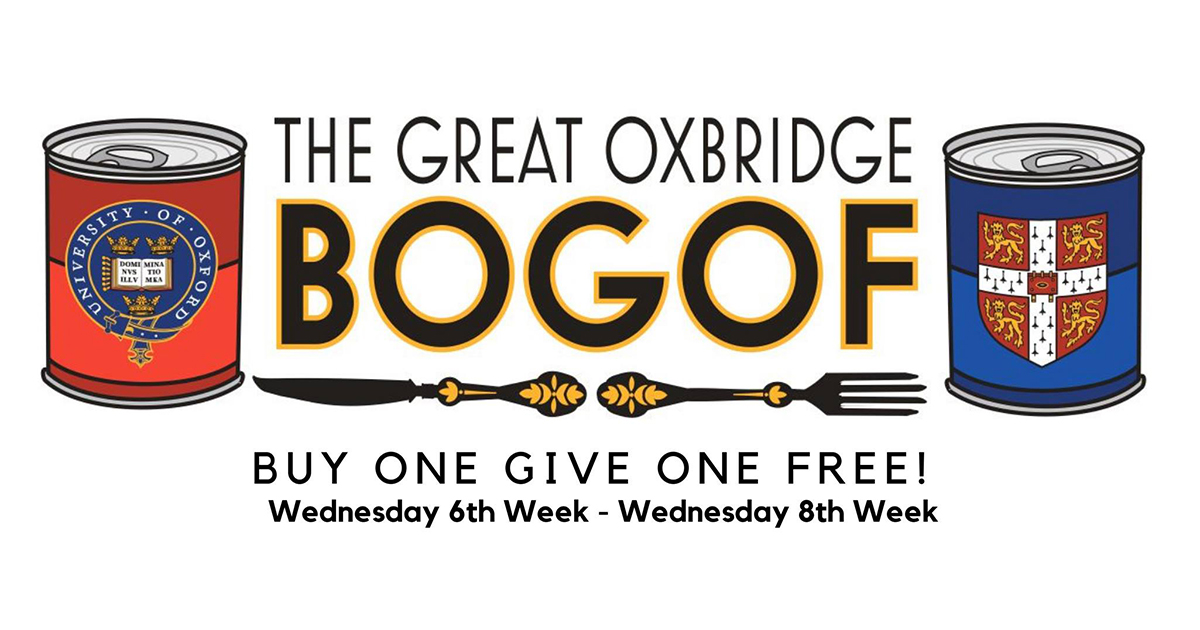 It is estimated that 100,000 people used a food bank for the first time during the first month of lockdown, and so it is clear that support for local food banks is desperately needed.

To help satisfy the rising demand, an initiative has been launched by the charity Because We Can, founded by former Lady Margaret Hall Junior Common Room president, Josh Tulloch.

The charity is launching its inaugural Varsity competition called ‘Buy One Give One Free’ (BOGOF), at both Oxford and Cambridge with the winner being the university that collects the most food items for local food banks.

The concept is simple. When you go shopping, and you are buying something that a food bank also needs, you are simply asked to buy a few additional items. That way, you can donate those items to your local food bank. The competition will last from this Wednesday until the Wednesday of eighth week, so if you are feeling the Christmas spirit early or just want a way to make a concrete, positive difference without spending too much time, this might be the perfect opportunity.

In describing his motivation for starting Because We Can, Josh Tulloch said: “I was homeless for a period of time in my early teens and faced situations of food insecurity. Luckily, I had the support of people, charities, and local councils who looked after me and my family. Many others aren’t so lucky’.

An Economy in Crisis

Data shows the huge strain that is being put on food banks – especially during this unprecedented time of national crisis. A trend of rising food insecurity has only been exacerbated in an economy where GDP shrank by 20.4% in the second quarter of 2020.

The Trussell Trust estimates that covid-19 and lockdown could lead to a 61% overall increase in food bank usage. This comes at a time in the UK when food bank usage has increased by 74% since 2015 with 1.9 million emergency food parcels distributed in 2019 alone. 700,000 of those food parcels went to children. Because We Can founder Josh Tulloch also stated that, “he hopes the initiative inspires more people to tackle social problems they care about, simply because they can. Even if we just have time and energy, we can make a difference’.

Already, 9 colleges from Oxford and the slightly higher number of 11 from Cambridge have heeded the call and signed up for the competition. This, in total, represents 7,500 undergraduates. If students spend a little time and money, this could be a great opportunity for food to be raised for both Oxford and Cambridge’s food banks while fanning the flames of a healthy competitive spirit.

It is, of course, too early to say which university will be the winner of the competition, but one thing is for sure: based on the performance of Because We Can’s food drives in the past, it is sure to be a success. Previously, Because We Can have raised over 11 tonnes of food for food banks in London at their annual food drive.

It remains to be seen whether the charity can manage the same feat in Oxford, and which university will be able to raise the most for their respective communities (though we’d place our bets on Oxford #stt).