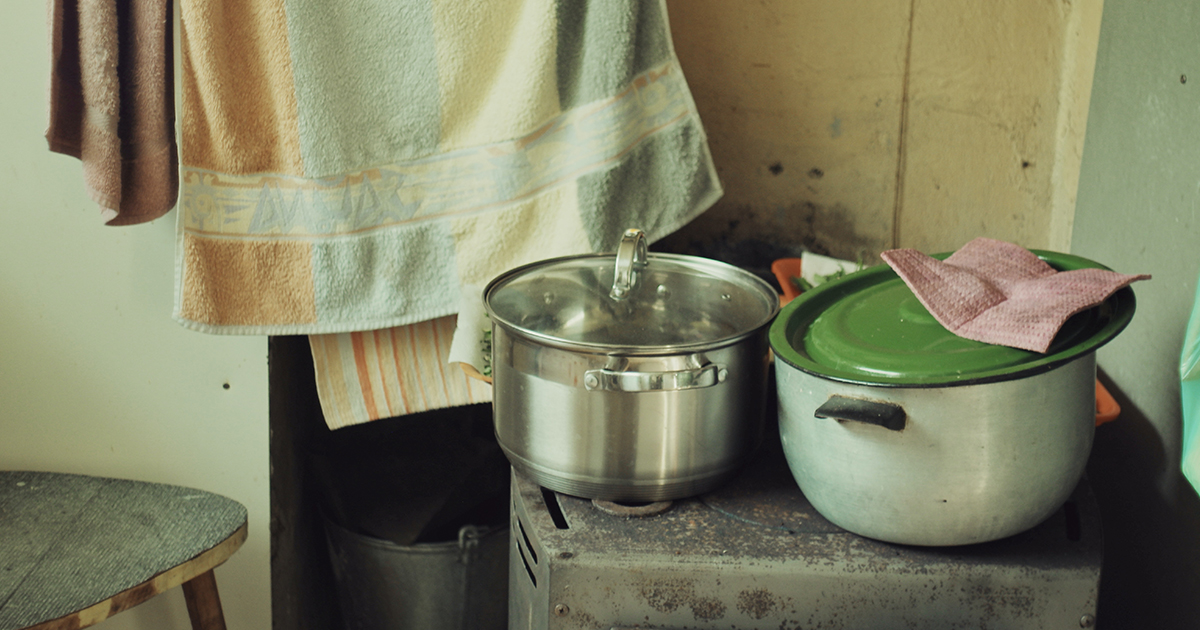 Image description: Two cooking pots on top of a rusty metal shelf with a kitchen towel hanging in the background

There is a common trend online whenever the topic of food poverty re-enters the public consciousness in this country, and it is utterly lamentable. Condescending commentators online, many of whom have never experienced abject poverty, tell people worse off than themselves how they should be feeding themselves and their families.

Yet the recipes they describe are often rather bland and not nutritionally varied, seemingly forgetting the fact that nobody can realistically live off budget-brand pasta and tomato sauce forever. I find it difficult to believe, to take the example of Annunziata Rees-Mogg tweeting about the price of a bag of potatoes, that it comes from a place of kind-hearted concern.[1] On the contrary, it is yet another manifestation of the disdain towards the poor which so many people apparently struggle to hide behind a thin veneer of their alleged ‘common sense’.

I have had some experience of growing up with the spectre of food poverty hanging over me and my friends in some of the poorest areas of Manchester, so to some degree, I know this feeling. For many students starting university, it will be the first time they’ve really had to budget and stretch the last of their bank accounts, but when families are having to do this week in week out it takes a heavy toll on their mental and physical health.

As a child, my mother was unemployed and in poorly-equipped social housing; the effects on her mental health were notable. There was a significant period when we did not have access to proper cooking appliances and she had to make do with a gas camping stove to cook all of our meals.

Naturally, this limited the types of dishes she could make (basically one pan for simple and short dishes) as she was always wary of using up too much gas and the cost of buying the replacement canister. In the end, we consumed a lot of instant ramens. It isn’t the most healthy or balanced dish in the world, but at least the noodles kept me full for long enough not to go too hungry. When I think back to my childhood and about how it continues to impact my relationship towards food today, I realise that many of my peers at university have very little idea about lived experiences such as mine.

Too few people who have experienced food poverty are given a platform to discuss their situation with any real agency in this country’s media landscape, but poverty is a complex issue caused by a cocktail of social and economic factors, and my experience is just one anecdotal example. Comfortably well-off public figures giving lectures on this is both unnecessary and misleading.

Cost-efficient batch cooking (to take another common example of the Twitterati’s advice) requires time, planning and adequate storage, none of which should be taken for granted. Furthermore, one has to factor in the cost of utensils, access to kitchen facilities (which is especially difficult in temporary or rented accommodation), and the price of gas and electricity. Unusual or unexpected working hours also have to be accounted for – 70% of children living in poverty have at least one parent in work, and this includes 0-hour contracts.[2]

When I think back to my childhood and about how it continues to impact my relationship towards food today, I realise that many of my peers at university have very little idea about lived experiences such as mine.

Allowing people who have no first-hand experience of food poverty to dominate the conversation is a sure-fire way of stilting efforts to improve the quality of discussion and ultimately implementing policies which are actually helpful; you cannot focus on food poverty in isolation. You must also examine the state of affordable housing, the cost of living, poverty wages, wealth inequality and urban planning, to name a few key areas of concern.

On the issue of cheap groceries, take Oxford as an example. In an ideal world, people would be able to quickly access affordable shops, such as Lidl, Aldi, or cheap local sellers of fresh produce. Yet in this city, which has an incredibly stark wealth gap, the city centre caters for the wealthier with Marks & Spencer, and cheap supermarkets are only to be found in the outer suburbs.

Those less well-off in the more disadvantaged inner-city areas are stuck going to relatively small metro shops which are more expensive and encourage impulse shopping over long-term cost-effective planning; a trip to the edge of town often requires a car, which has expensive running costs, or a bus journey which limits the number of groceries one can carry at once.

On top of this, even such basic foodstuffs are highly sensitive to the inflating food prices (partially caused by the realities of the pandemic, but this will also potentially be the consequence of a no-deal Brexit). Millions of people in this country are classed as ‘food insecure’, meaning that they don’t have the extra money to account for this[3] – particularly those with bleak or uncertain job prospects as furlough only pays 80% and is due to stop at the end of March.

There is an elephant in the room (well, article) which is stomping about and causing a scene. Over the last ten years of a Conservative government, the rate of children living in relative poverty in the UK has risen.[4] In the last five years, usage of the Trussell Trust’s foodbank network has increased by 74% in five years.[5]

The party which has reduced welfare support to the most vulnerable now has its politicians lecturing us on how to cope with the pitiful conditions to which they have reduced people. When Jacob Rees-Mogg, the leader of the House of Commons (and Annunziata’s brother), comments that the increasing use of food banks in this country is “rather uplifting”,[6] he is normalising an aspect of the poverty experience which should be used only in an emergency. Their increased use is a searing indictment of the failures of the government to support those with the least.

A parent spending a disproportionate amount of their income on alcohol, cigarettes or drugs is not the fault of the child, but a symptom of the impact of poverty upon people. Instead of chastising those with little, we should have a robust welfare system which ensures that children are not going to bed with empty stomachs. We are one of the most developed countries in the world, yet the wealth inequality in Britain remains shocking.

I am a firm believer that we can judge the character of a nation by how it looks after its most vulnerable, and right now the government is showing its true colours.

For those who argue that free meals over the holidays are an extra expense which an already-overstretched government cannot afford, I counter that it is a rather trivial sum compared to the billions wasted by the government during the coronavirus pandemic.  And it is worth every penny. For those cynical enough to not be moved by starving children, there are the benefits of increased energy, improved wellbeing and greater academic success when a child is adequately nourished – if one has to be persuaded by the cold and calculated economic benefit. Whilst local businesses and volunteer groups stepping in to fill the government’s dereliction of duty are admirable, many people are currently having an incredibly stressful time and it seems rather neglectful to shift the burden away from the state and onto those individuals.

Finally, after much campaigning, the right decision has been made and the government is taking action. However, the initial resistance to Marcus Rashford’s campaign for holiday free school meals remains concerning.  I am a firm believer that we can judge the character of a nation by how it looks after its most vulnerable, and right now the government is showing its true colours.