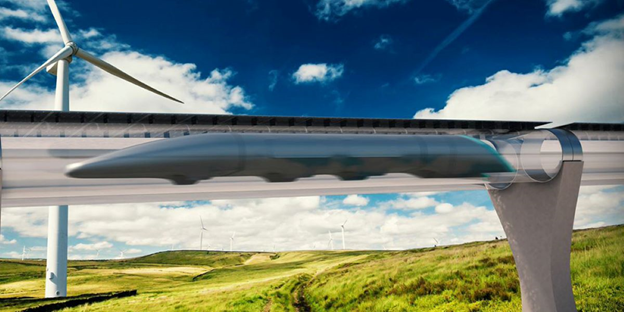 Trick question, it is neither. The world of transportation has already seen the rise and rapid fall of the steam locomotive and, as we look set to enter into a new era of travel, Hyperloop employs anything but traditional traction…we are talking magnetic levitation.

When news broke last week that Virgin Hyperloop had become the first player in this up-and-coming industry to conduct a test ride with passengers on board, the world was watching. The stopwatch read 15 seconds over 500 metres, giving a top speed of 107 mph. Whilst certainly an impressive first outing, these numbers are a shadow of what most industry experts predict Hyperloop could eventually manage. Top speeds are estimated to cap out at around 650 mph. In perspective, that is a four-hour train journey from London to Edinburgh cut down to 28 minutes. This technology could be seriously quick. Last week’s development has been described as a “moonshot moment” by Jay Walder, the chief executive of Virgin Hyperloop, adding “I have no doubt this will change the world”.

An idea first mentioned over a century ago by US engineer Robert Goddard, the Hyperloop concept was given a rebirth, rather unsurprisingly, by Elon Musk, outlining his ideas in a 2013 paper titled Hyperloop Alpha. Too preoccupied with revolutionising the world on the roads and in space, he made his ideas open source, challenging his contemporaries to run away with his dream.

Musk envisaged this technology would dominate our means for travelling distances of up to 1000 miles, after which “supersonic air travel ends up being faster and cheaper”. Before we dive too deep, I am going to borrow Musk’s foreword from his paper: “I apologize in advance for my loose use of language and imperfect analogies”.

The premise is simple. Take a really long tube, pump out most of the air and fire a small pod down it at near sonic speeds. In this way, Musk proposes a mode of transport which immediately overcomes the two biggest enemies to conventional methods of travel: air resistance and heat losses. The near vacuum deals with the former problem. His initial plan for the latter was effectively an air cushion on which the pod would sit – think puck on an air hockey table. However, the latest proponents of Hyperloop have shifted away from air cushions and more towards Maglev technology, famously employed by Japanese bullet trains to levitate the pod off the ground.

The first company to pick up Musk’s gauntlet was Hyperloop Transport Technologies (HTT). Initially headed up by Dirk Ahlborn, HTT has expanded Hyperloop out of Musk’s back garden of California and struck a series of deals with local authorities around the globe such as Ukraine, Abu Dhabi and the Guizhou province of China to construct Hyperloop infrastructure. Despite their year-long head start on Virgin Hyperloop One, they were pipped to the finish line of achieving the first passenger test. HTT is poised to conduct its own passenger trials later this year.

Despite green lights flickering on for Hyperloop, there still remains significant obstacles before this sci-fi dream is a tangible reality. The technology has met, and will continue to meet, both scientific and economic hurdles. Early pioneers of this technology included the Swiss Institute of Technology, which sought to construct a network of underground Maglev trains in the 1980s, only to quickly abandon plans due to the astronomical costs involved at the time.

The economic case isn’t much prettier now. Musk’s initial estimate for a trans-California route from Los Angeles to San Francisco, was for a total cost of $6 billion, but experts, such as The Atlantic’s senior editor Alexis Madrigal, believe it is more likely to be at least ten times as much. Perhaps a daunting prospect on the face of it, but at least Hyperloop should be able to plough through any attempted partisan gridlock to funding. The concept is appealing to both those on the right, owing to the compelling economic gains that derive from construction and operation, while the environment merits are alluring for those on the left.

Another cause for concern is the variety of safety implications that arise from a full-scale Hyperloop network. As Paolo Chiggiato, an engineer who works at European Council for Nuclear Research (CERN), rather starkly notes: “a plane does not travel a few centimetres from a steel wall”. Moreover, the immensely depressurised tube environment means that, in the event of a cabin puncture, passengers would find themselves in a deadly vacuum, akin to being held in the atmosphere 50 km off the ground. These problems don’t have easy answers, especially when mixed into one lethal Hyperloop cocktail.

Musk knows this and has expanded the pool of talent in the industry by drawing in some young blood through the Hyperloop Pod Competition. Since 2015, SpaceX has run an annual competition open to all, students and commercial startups alike. Young minds battle it out to produce the fastest pod to zip down SpaceX’s own test track, whilst also needing to consider emergency braking and backup systems in the event of a critical failure.

The kings of the competition come from the University of Munich, going by the name TUM Hyperloop. Their 2019 outing was especially impressive, clocking in at 482 km/h. President of TUM, Professor Thomas F. Hofmann, was quick to identify the source of their unrivalled success as a specific focus on “combining specialised knowledge from various fields such as high-power technologies [and] lightweight design”. Currently, the University of Edinburgh is the only UK-based team to find any success. But if anyone has been inspired by this exciting field (and/or fancies a trip to California) do get in touch with me.

For me, Hyperloop has too bright a future to be ignored by either private investors or governments worldwide. Here in the UK, our obsession with HS2 leaves us at risk of being left in the dust by nations around the globe. Admittedly, it’s a seriously bold punt. But, with time running out to solve many of the world’s impending problems, to quote Tom Hardy in Inception, “[we mustn’t] be afraid to dream a little bigger, darling”.