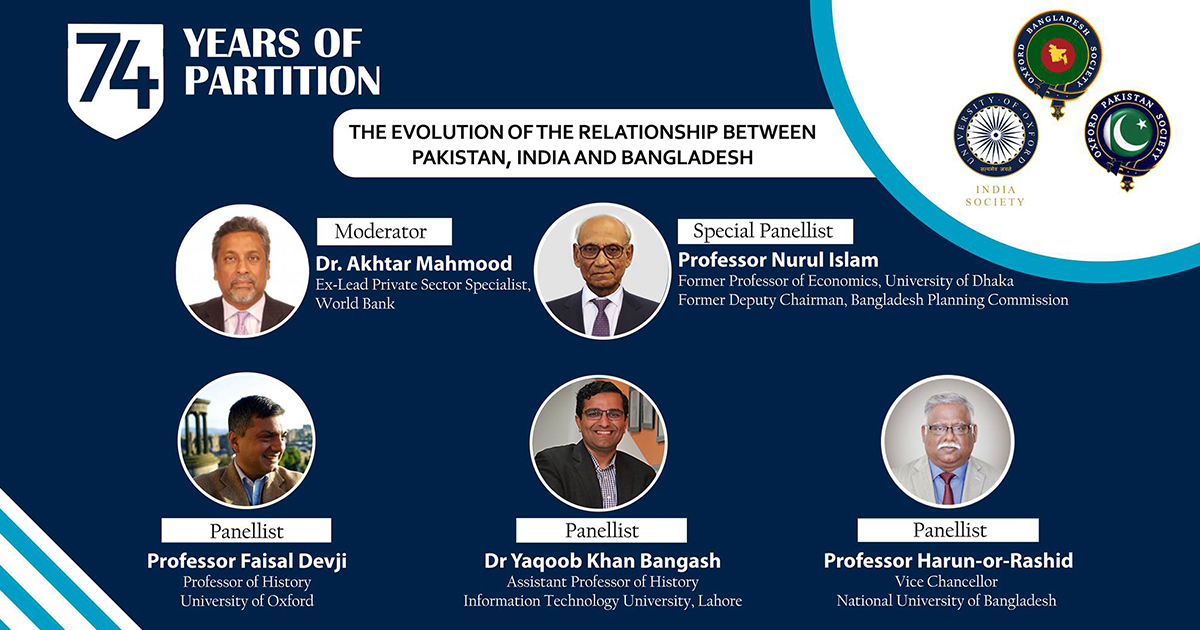 Pakistan, Bangladesh and India societies will meet to discuss partition for first time

The Oxford Bangladesh Society, the Oxford Pakistan Society and the Oxford India Society are hosting an online zoom event to discuss partition. This is the first time that the societies have come together to discuss the historic event, which took place 74 years ago.

The Zoom panel discussion, which will be held on Saturday 21st November at 3PM, features leading academics from four countries. The description of the event reads:

“We’re delighted to announce a panel discussion about one of the most memorable and life-changing events in the history of South Asia, the partition. It’s the first time that the Oxford India Society, the Oxford Pakistan Society and the Oxford Bangladesh Society are coming together to talk about this historic event. The discussion is going to be led by world-renowned experts and will focus on how the relations between these three countries has evolved compared to what was envisioned 74 years ago.”

“Our speakers are leading academics on history, economics and South Asia and will be joining us from four different countries. The panel consists of Professor Nurul Islam, Professor Harun-or-Rashid, Professor Faisal Devji and Professor Yaqoob Bangash. The event will be moderated by Dr Akhtar Mahmood.”

All three societies commented on the historic nature of the event, as the first be co-hosted by all three, and emphasised that the current COVID-19 pandemic has played a role in making the panel discussion possible. As the Oxford Pakistan Society explained, the pandemic’s role in creating a greater audience for online debates has allowed the panel, with speakers from across the globe, to take place.

The society stated that “If we, as the future of South Asia, plan on working together it is really important to have these types of discussions. In this event we will talk about what could have been and contrast it to the current situation, hopefully that will give us something to aspire to.

I think the main reason an event like this has not happened before is because it would be simply too hard to coordinate as an in person event. Our speakers are from 4 different countries and one of the only good things about the pandemic is that it has become easier to have these kinds of events”

The Oxford India Society commented that: “It’s mind-blowing how so many people from India, Pakistan and Bangladesh are culturally so similar but miles apart when it comes to how they view the South Asian subcontinent. We’re hoping that through this panel discussion, we are able to open communication between people of these three countries and perhaps get everyone on the same page. Since the partition has been such a defining moment for the subcontinent, we think it’s a good place to start to unravel the relationship between these countries and how it has changed over the last 74 years.”

Professor Faisal Devji is a Professor of Indian History at St Anthony’s College, and a panellist for the discussion. He is interested in the development of political thought in modern South Asia, alongside Gandhi’s theory and practice of non-violence. He commented “The Partition of India produced what is now the oldest conflict at the UN. It continues to hold back all the countries of South Asia from achieving their social, economic, and political potential. Far more than a merely historical or regional issue, it comprises a truly global problem affecting the lives of nearly two billion people, and as such deserves much more attention than is usually given it.”

Other panellists include Professor Nurul Islam, who has been a fellow of St Anthony’s since 1975, Assistant Director General of the United Nations Food and Agricultural Organization, and Advisor and later an Emeritus Fellow at the International Food Policy Research Institute. He has also held visiting academic appointments at Yale, Cambridge, and LSE. Professor Harun-or-Rasid, who is the current Vice Chancellor of Bangladesh National University. He completed his PhD at the University of London, before undertaking research in Sweden and Japan. Also on the panel is Professor Yaqoob Bangash, who completed his DPhil at the University of Oxford, and is currently the Director of the Centre for Governance and Policy at the Information Technology University, Lahore, Pakistan. He has previously published books on the emergence of Pakistan as a post-colonial state, and the history of the High Court of Lahore.

The Oxford Bangladesh Society acknowledged the troubled history of the sub-continent, but expressed hope for the future, and emphasised the important nature of discussion .

There is no denying the animosity the countries and their people – young and old – have towards each other today; a consequence of political decision-making and historical evolution.

But we will be better.

Our futures are not bound by the centuries-old (and equally important) feuds of who makes the best chai or biryani, but by what is best for the people and their livelihood. So – we challenge you to this: come. Come with an open mind, do not shy away from the issues that are most sensitive to you and be BOLD, but be respectful.

Our histories are from each other, and they will be written by our generation. Let us be remembered for forging productive and respectful relationships irrespective of our concrete differences.”