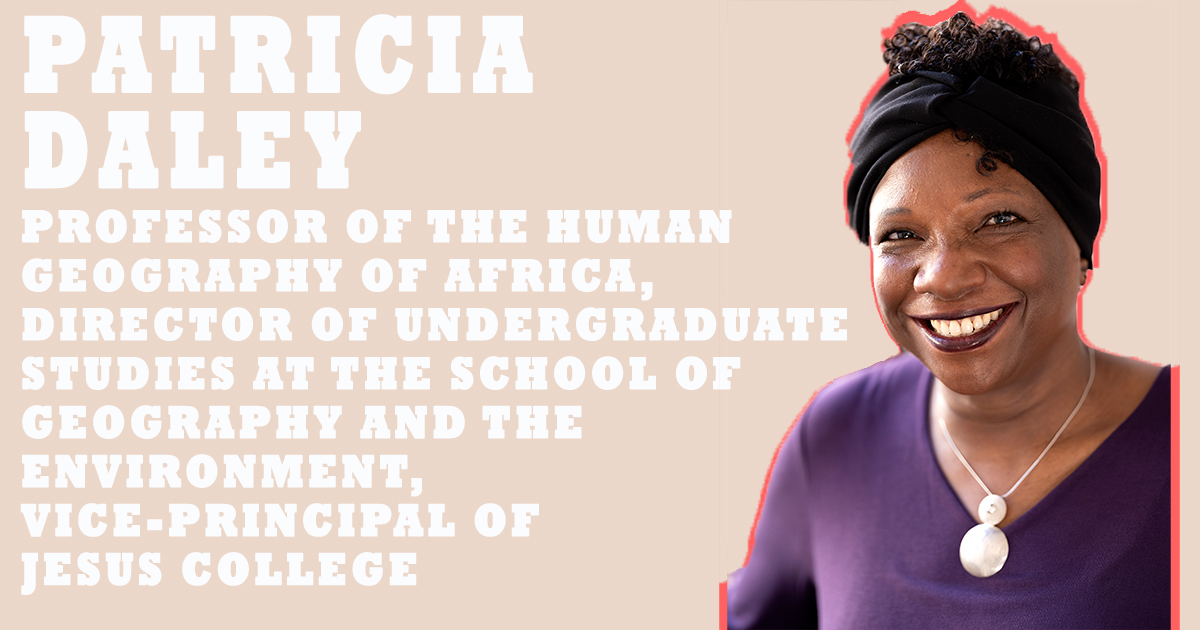 To commemorate Black History Month and beyond, the Profile editors of the Oxford Student have been interviewing Black academics and students this to explore their personal experiences and learn about the important work that they do at the University of Oxford and beyond. Join us in hearing some of the voices in our University that deserve more recognition than they currently have.

Our series continues this week with Patricia Daley, Professor of the Human Geography of Africa and Director of Undergraduate Studies at the School of Geography and the Environment, University of Oxford. Alongside teaching, she sits on a variety of college committees as the Vice-Principal of Jesus College, she partakes in voluntary work and has spoken about her research at a number of international conference panel discussions. This week Patricia spoke to me about her various commitments, the role of scholars in shaping change and the importance of Black History Month.

Could you tell me about your background and how you came to be Professor of the Human Geography of Africa?

I came to the UK from Jamaica at the age of 10 and lived in London until I was 28, so I identify as a Londoner. All my post-secondary education was in the UK. I received free university undergraduate education and scholarships for post-graduate studies. I never underestimate how lucky I was to have entered higher education at that time. I studied geography and got interested in Africa academically when I took an evening class in African women’s writing. I did a masters at SOAS and doctorate at Oxford, focusing on Africa. I joined the university in 1991 after short employment stints at Dartmouth College in New Hampshire, USA, and Loughborough University. I was the first black person to be appointed to an academic post in Oxford University, and for many years I was mistaken for a postgraduate student when I went to meetings, but generally, people were welcoming in the department and in college. There was always the odd character who had difficulty recognising me as a scholar and possibly as a human being. The constraints I encountered then related as much to me being a woman, for example not recognising the career impact of caring responsibilities. That has changed for the better, although the COVID-19 pandemic seems to have brought some aspects back. I was promoted to Professor in 2016. When it was announced, a colleague texted me to say that it should have happened ten years earlier. The reasons for my delayed application are not uncommon amongst women academics – we tend to lack confidence and wait until we have covered all the bases, just to avoid being turned down.

What do you find to be the most interesting aspect of your research? What has been the most rewarding part of teaching human geography and courses on African societies and environments to students at the University?

The most interesting aspect of my research is trying to think beyond conventional approaches and interpretations of what are deemed ‘African problems’; that means unlearning Eurocentric hegemonic perspectives. I draw my inspiration and ideas from African and Pan-African perspectives and gain additional insights from progressive European scholars.  When I did my doctoral research on refugees in the 1980s, I used a neo-Marxist political economy approach and shifted in the early 2000s to using Critical Race Theory after my experience doing fieldwork in a context where a United Nations peace-keeping mission was operating. Now, I am developing my thinking through a decolonial lens.

I get a lot of pleasure from watching students studying new knowledges that challenge their assumptions about Africa. Topics on representations of Africa in the Western media, on colonial violence, such as during the Mau Mau uprising in Kenya, and on the colonial legacy in conservation, tend to shatter received wisdoms. Students also enjoy being introduced to non-conventional sources of information on Africa – these may be books by African or African descent authors, and from African Studies journals and websites, such as PambazukaNews.org and Africaisacountry.org. I would like to thank the postgraduate students who nominated me for the OUSU Supervisor of the Year award in 2016, and those who sought to honour me by establishing the Daley Breakfast salons in 2019.

Owing to your pioneering research, you have been spoken in panels at a number of conferences, including the 30th Anniversary of the Center for Refugees and the High Commissioner’s Dialogue on Protection Challenges at the UN Refugee Agency. What do you think is the role of academics in shaping local and global change?

There is a lot of emphasis on impact in academic work, but the opportunities for impact vary considerably depending on the type of research we do. It can be immediate and widely supported, as in finding a COVID-19 vaccine, or take place over the long-term and less welcomed by political elites, as in trying to inform or change refugee policy.  I define myself as a scholar/activist. The research questions that I address have outcomes that potentially can promote social justice, especially improving the living conditions for vulnerable and marginalized people.

You are currently Jesus College’s Vice-Principal and have previously held the positions of Tutor for Women and Tutor for Admissions. What has been your experience of taking on these roles?

These have been three important positions to occupy.  As Tutor for Admissions in the late 1990s, I was keen to widen participation and address the gender imbalance. I was pleased to witness the number of state school students and women increasing during my tenure.  As Vice-Principal, I have worked with colleagues to establish an Equality and Diversity Committee in College. We had our first meeting in Trinity Term  2020, and are in the process of developing an Equality Action plan, in which we will identify the key areas that we want to address over the next three years, including making sure equality issues are central to the College’s next strategic plan.  At the same time, as a feminist and an anti-racist activist, I have to work to ensure that equality agendas are transformative, rather than co-opted to entrench power.

At the University you co-founded the Black and Minority Ethnic (BME) staff network. How did this come about? What are the network’s aims and what has already been achieved?

The BME staff network was launched in April 2014. At that time, we had a race equality officer, Shakina Chinedu, who had experience with setting up similar networks elsewhere. She saw the need in Oxford and encouraged its formation. When I was the University Assessor in the Proctors Office (2015-16), I produced a Race Equality Report. For my research, I interviewed BME staff who wanted a safe space to have conversations about discrimination and to obtain support and encouragement from other colleagues. The Network has had wonderful chairs and co-chairs – Machilu Zimba, Nita Fisher, and now Daphne Cunningham and Alexander Gordon. All have done this most important work in their spare time.  Our main success has been to make sure the voices, and distinct concerns, of BME staff, are heard at the centre of the University. From the outset, the Network wanted to be a ‘critical friend’ to the University, so we worked with the University’s Equality and Diversity Unit to set up the Black History Month Lecture. We are a forum that the University can consult when input from BME staff perspectives is needed on University policies and actions. We also advocate on matters pertaining to BME staff, as in our letter to the Vice-Chancellor during the Black Lives Matter campaign this summer (see https://edu.admin.ox.ac.uk/files/bmestaffnetworkopenstatementblmprotests15june2020pdf).

It is safe to say that you are involved in a lot of initiatives alongside teaching and other roles. How do you manage all of these responsibilities whilst maintaining a good work-life balance? What advice would you give to others in the same position?

I am responding to these questions in term time when achieving a work-life balance seems like a pipe dream. Certainly, there are pinch points when I work intensely to complete a project, but I have learnt that a good calendar helps to keep things on track. I arrange my work according to deadlines. People who request material too close to an agreed deadline are likely to get short shrift.  For leisure, I love watching films from around the world, walking, gardening, and reading novels. My recent birthday gifts include Tsitsi Dangarembga’s The Mournable Body, Zadie Smith’s Grand Union, and Avni Doshi’s burnt sugar. I can’t wait for the Christmas holidays to get stuck into them.

In the spirit of Black History Month, what does Black excellence mean to you?

I have problems with the term ‘black excellence’. It assumes that ‘excellence’ is racialized and there is some sort of quintessential excellence that is confined to people being black – therefore ghettoizing what black people do. Black people achieve excellence in all spheres of life, just as other groups of racialized peoples. However, racial discrimination does mean that black achievements, when occurring in white-dominated societies, require enormous effort and determination, so should be celebrated even more so.

What does Black History Month mean to you?

A time of year when black people and the nation overall can reflect, learn, and celebrate the presence and contributions of black people in British society, past and present. However, black history is integral to British history and should be part of the curriculum, in the media, and spaces of national conversations about British history. Because that is not yet the case, a month to focus and promote black history is essential.

Maintain an open mind and be prepared to change your views if convinced by new evidence.

This is a difficult one. I don’t like to be too prescriptive, because we all have our own tastes, preferences etc., and I have learnt to appreciate others by being prepared to venture beyond my comfort zone.  Nevertheless, I would recommend that every geography student should read:  David Harvey’s A Brief History of Neoliberalism; Katherine Yusoff’s A Billion Black Anthropocenes or None; and Amber Murrey’s A Certain Amount of Madness: The Life, Politics and Legacies of Thomas Sankara. They should watch the documentary film ‘Concerning violence’ by Göran Hugo Olsson and listen to Burna Boy’s ‘Another story’.