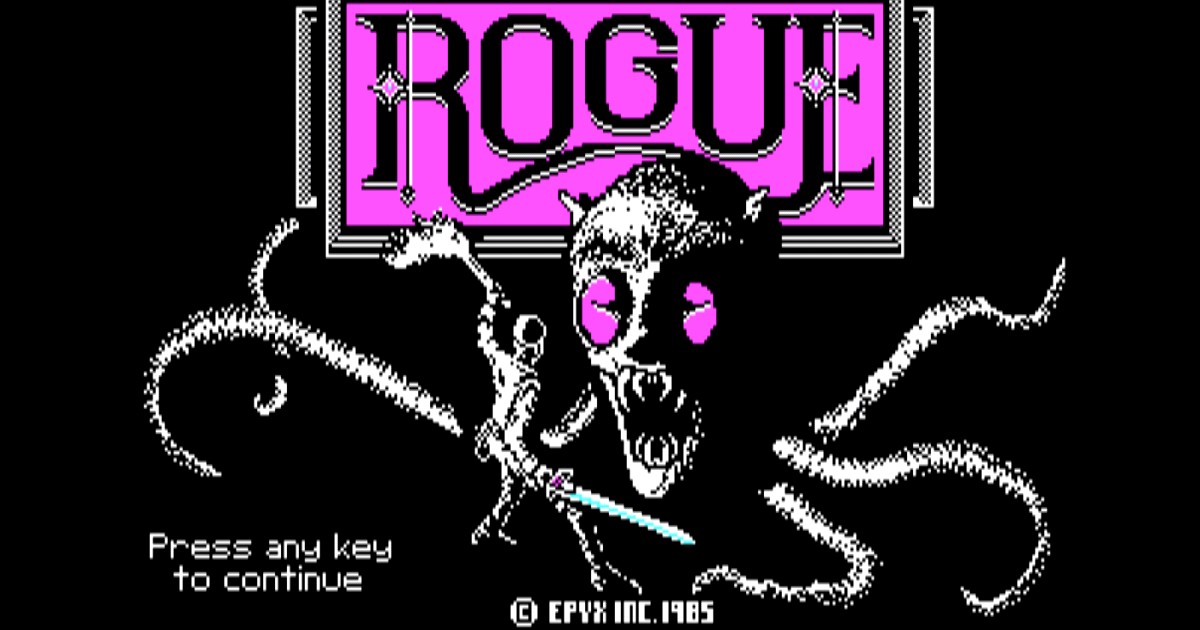 Roguelikes – From Rogue to Deathloop, a Legacy of Replayability.

In 1980, Rogue, an ASCII-art Dungeon-Crawler was released. Designed by Michael Toy, Glenn Whichman and Ken Arnold1, the game sees the player navigate their sprite through a randomly generated maze, gathering equipment, learning magic and fighting monsters in an effort to find the “Amulet of Yendor”. The game was immensely popular, and if you are willing to part with £2 on Steam where it was re-released this year, then it is easy to see why. After spending some time deciphering the instruction manual – older games often relied on physical manuals, rather than the in-game tutorials we have grown accustomed too – you will begin to see how the turn-based input can lead to very deliberate strategy, and how finding new items that can make your “rogue” stronger leads to a real sense of progression. However, the defining feature of Rogue is that if you happen to get slain by one of the many monsters lurking the halls of the maze, you do not lose a life, or pay a penalty: you go back to the start and lose everything. This sounds like horrible game design. Why would I ever play a game that I need to play perfectly to complete?

But that is the genius of Rogue. The game is designed with these resets in mind. The maze is randomly generated – every time you begin a game you enter a new maze, with new items scattered throughout to find, and a different experience than any other time you played it before. This has important consequences. Firstly, the game has a natural learning curve. As you pick up different items and fight different enemies and get more used to the controls, in each run you can get deeper and deeper into the dungeon, and closer and closer to the Amulet. Secondly, the tension and immersion created by the real sense of peril that comes with the hard reset of death is palpable. Every attack you make, potion you “quaff” and monster you encounter heightens the pressure for you to make the right moves if you truly want to survive and reach the treasure.

These design tricks, along with the game’s success, was instantly noted by other developers, who set about creating their own take on the rogue formula. Early examples include Hack and Moria, and the Mystery Dungeons franchise (1993-present) used a similar idea to make games inspired and licensed by other popular franchises, such as Pokemon and Final Fantasy. Thus, the genres of rogue-like (very similar to rogue) and rogue-lite (somewhat similar to rogue) were born. By adopting some of Rogue’s key ideas, these genres succeeded in creating games that were infinitely replayable, encouraged skill and persistence and rewarded the player with a distinct sense of their progression.

In the last 10 years, the roguelike has re-emerged as a hero of the indie gaming scene. Games like Spelunky, The Binding of Isaac, Enter the Gungeon, Dead Cells and Hades are among the most successful recent indie games and all fall firmly in the roguelike category.

Games like Spelunky, The Binding of Isaac, Enter the Gungeon, Dead Cells and Hades are among the most successful recent indie games and all fall firmly in the roguelike category.

My first experience of the roguelike was the aforementioned Binding of Isaac in its second incarnation Rebirth. Over the 6 years I have owned it (on both Switch and PC), I have amassed over 300 hours, and not one of those hours felt boring or repetitive. Isaac is a game by Edmund McMillen2, the creator of smash hit Super Meat Boy, and is an abstract telling of his upbringing, emphasising how he grappled with the faith of his family which contradicted his own morals and interests. These themes are adapted into a retelling of the biblical story of Abraham and Isaac, wherein a parent follows their faith in God, rather than protecting their child, exactly as McMillen felt about his family.

Isaac is an incredible piece of art in how it deals with the perspective of a child, and a traumatic subject. And its use of the roguelike design, which is core to the telling of the story, is perfect in how it enables the player to progress through McMillen’s world learning slowly, at their own pace, how to best control Isaac, fight certain enemies, and combine the many, many power-ups.

While the history of the roguelike lies firmly in the indie studios’ capable hands, next year the first roguelike produced by a Triple-A studio, Deathloop, is due to release on PC and PS5.

Developed by Arkane Studios (Prey, Dishonored 1&2), Deathloop follows the tale of Colt, an assassin sentenced for some unknown crime to awake in the same day on a hedonistic island in constant celebration, with the guests of this unending party attending for the chance to hunt Colt. The twist is that no matter how close Colt comes to escape, or if he dies, the day just restarts due to the actions of 8 powerful individuals across the map. This hellish groundhog day can be ended by slaying each of these people, although a clever multiplayer twist could make this devilishly challenging.

The time loop mechanic is clearly an element straight out of the roguelike. A failed attempt, a hard reset. Game Director Dinga Bakaba spoke to IGN3 about the game. One key component he mentioned that the studio valued was immersion – the roguelike elements are a good choice to achieve that. As mentioned before, the tension in knowing there are consequences of a death make it more meaningful, making the player less flippant than they might be in your normal shooter where you could die many times with no consequences. Thus the emotional distance between the player and the character is reduced, meaning a much deeper, more rewarding story can be developed.

The tension in knowing there are consequences of a death make it more meaningful, making the player less flippant than they might be in your normal shooter where you could die many times with no consequences.

Bakaba also spoke about the importance of progression within a roguelike. Colt keeps his memories between loops. This is important as it drives the story of the game, and again keeps the protagonist and the player closely linked: “Imagine that I find an important clue, and I die just after that. Progress is still made. You might lose the gun that you found, but the story has moved forward. Colt now knows something and the player both knows something important and they need to act on this thing.”

So why are we only getting a triple A roguelike over 40 years after the genre’s conception? One argument, that I believe makes a lot of sense, is that to achieve the random generation key to the genre, to the quality required for one of these large, established companies, is challenging. Graphic design is the key cost here.

Dead Cells Lead Designer Sebastien Benard4 explained how the random of roguelike is not truly random. In fact, in order to keep the quality of their maps satisfactory, they actually had to design many individual rooms and structures, and develop a system that randomly connects them together. Thus, the art team had to create textures and fill in a massive number of designs, inevitably increasing the game’s budget.

So, for the HD textures expected from a studio like Arkane, the manpower, and money, needed to achieve the task is immense. Arkane’s solution was to create a rogue-lite which strays from the procedurally generated map and has a more constant backdrop, with the rogue elements mainly relating to the hard reset on death. This allows Arkane to loot the proverbial Amulet for the advantages of Rogue-like elements, without watching their budget creep up as a result.

Deathloop is scheduled for release in May 2021, and I certainly think it will be worth checking out. In the meantime, I highly recommend any of the other roguelikes I have mentioned, although be wary of how easily you can sink many hours of time into their rewarding progression systems, all thanks to the ingenuity of Rogue.

1. Procedural Dungeons of Doom: The Making of Rogue
2.  The Binding of Edmund McMillen
3. Deathloop Devs on PS5 Features, Time Loop Gameplay
4. Building the Level Design of a procedurally generated Metroidvania: a hybrid approach.