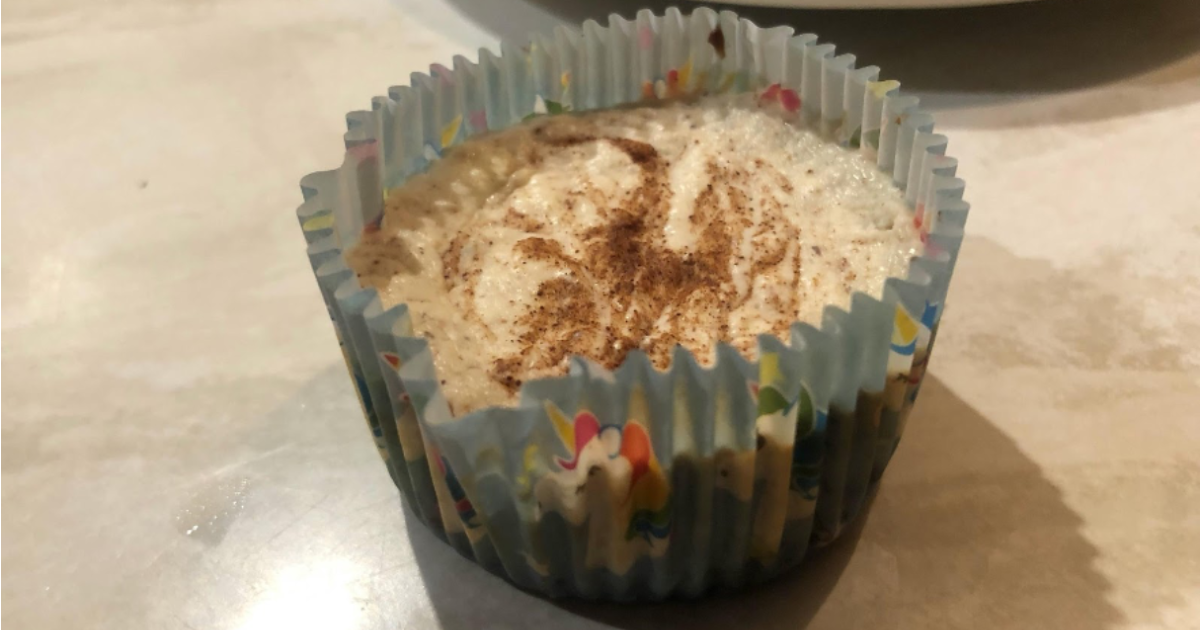 Image description: A mini cheesecake in a blue cupcake case.

Last week’s episode of the Bake Off did not disappoint. Dessert week presented the bakers with the challenge of making beautiful jelly art design cakes and in the technical, Sussex Pond Pudding. Previously unaware of Sussex Pond Pudding, after seeing the mushy final products that fell apart as Paul Hollywood cut into them, I’m not sold. The signature challenge, however, ignited my taste buds. Each baker presented the judges with a unique display of 12 ‘identical’ mini cheesecakes, ranging in flavour and design. While we saw many mini disasters in this challenge, including Marc’s absence of apricot flavour in his ‘apricot-flavoured treat’, many unique flavours were brought forward, including Peter’s ginger and lime. Inspired by their creativity, I tried my hand at mini cheesecakes this weekend. Although I’m a lover of the classic New York style, I opted for a recipe inspired by Peter’s Showstopper theme, Christmas. I created spiced mini cheesecakes, packed with spices that I’d typically find in the pumpkin pie we have every year during the holidays.

I’ve made many cheesecakes in the past, but only on a larger scale. Typically, I find the process to be time consuming, although the result is always worth it. I was curious to see how the preparation and cooking time would compare in its mini version. I opted for the mini cheesecake base recipe from Sally’s Baking Addiction: a prominent food blogger whose recipes I rely heavily on to satisfy my undying sweet tooth.

The recipe itself was quite straightforward, and the ingredients basic. I had most of the ingredients at home from previous baking endeavours (granulated sugar, vanilla extract, fresh lemon juice, egg, digestive biscuits and butter for the base), though I had to run to the shop to pick up the cream cheese and sour cream. This recipe was appealing because it made nine mini cheesecakes, which was just the right amount for my partner. Of course, this can be modified to suit your mini cheesecake needs! Following the recipe carefully, the batter for this cheesecake was made in ten minutes, and within that time, I managed to pre-bake the biscuit crust for the recommended five minutes.

To make this recipe my own, I substituted half of the required digestives for the cheesecake base with ginger nut biscuits to give the base a more distinctly holiday feel. Before baking, I also added a bit of cinnamon into the base, to elevate the overall spice level of the mini cheesecake. I then added into the cheesecake mixture roughly a teaspoon of cinnamon, half a teaspoon of ginger and only a quarter-teaspoon a quarter of cloves and nutmeg, as these flavours are more overpowering than cinnamon and ginger when baked.

Overall, I was quite pleased with how quick the process was from start to finish. In less than an hour I had nine fragrant mini cheesecakes baked, cooling and ready to eat after dinner. A major limitation of making a full-size cheesecake is that every step of the process (preparation, baking, cooling) takes longer. So, if you are looking for quick gratification to satisfy your sweet tooth, these mini cheesecakes are your best bet. However, if you are craving the richness and decadence typical of a cheesecake, I would still recommend making a full size one, to get a more decadent cheesecake to crust ratio in every bite.