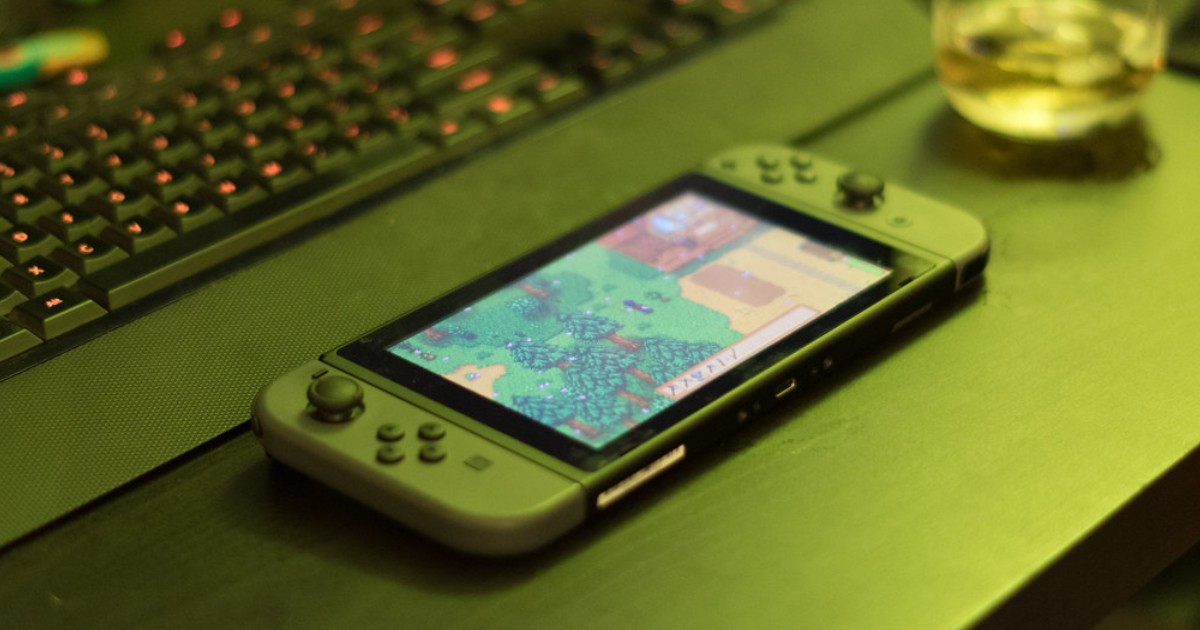 Some games to try this Socially-Distanced Christmas.

Image Description: A Nintendo Switch, playing Stardew Valley, on a desk next to an LED keyboard.

As we come to the end of the second national lockdown, many of us, especially those who have been isolating, have been forced to entertain ourselves. Video games are a brilliant way to do this.

Multiplayer games allow us to interact with people we may otherwise be unable to see. This is incredibly significant at the moment, and the global success of games like Among Us recently is likely a result of people who would otherwise be playing games like Mafia in real life, looking for somewhere new to find human interaction.

Single player games can also be an incredibly good distraction. If you have already binged 3 seasons of your favourite show, why not explore an rpg, where the interactive nature of games can give an experience wholly different to traditional visual media.

So, here are some games we have been playing which could stop Covid from driving you insane in the holidays.

As a self-confessed amateur gamer, I’ve been surprised by how much I’ve enjoyed playing Among Us in Lockdown. It’s essentially an online version of Wink Murder/Mafia where you can play with friends or random people online. Up to 10 players have to complete tasks on a spaceship with impostors who go around sabotaging everything; each game you either play as a ‘Crewmate’ or ‘Impostor’. My friends and I use Discord to communicate during the game. For such a simple idea, there’s a lot of strategy, blame-shifting and acting involved which always keeps things entertaining! I’ve never belly-laughed so much playing a game!

I played both games with my boyfriend during the first Lockdown and I can’t tell you how obsessed I was! Overcooked is a cooking simulation game in which you have a limited amount of time to prepare different meals while facing different obstacles. From cooking on pirate ships and hot air balloons, to managing moving workstations and multiple orders, the aim of each round is to meet enough orders to score points and collect stars (maximum of three). This game is super fun and, at times, incredibly frustrating! It requires a lot of patience, adaptability and communication with your teammate!

The Binding Of Isaac

This arcade-style twin-stick rogue-like is a testament to the history of video games. Edmund McMillen semi-autobiographical work puts us in the shoes of Isaac, a young boy whose mother has begun hearing voices she believes to be God, demanding her son be sacrificed. This begins Isaac’s journey that sees him trying to escape through the basement, a place littered with enemies that Isaac can fend off with his tears, and items which develop his abilities. This journey will challenge you mechanically, but reward you with the tale of how a boy can overcome fear, danger and questions of faith , through resilience and his personal love for video games.

Counter Strike: Global Offensive is Valve’s Free-To-Play tactical FPS. CS:GO places you in the shoes of a counter-terrorism unit locking horns with a terrorist threat, or a terrorist threat attempting to further its goals. This simple concept is masterfully handled, with players having to navigate multiple rounds of play, with economic factors, related to your performance, dictating the equipment you have available. This leads to a deep level of strategy which along with a unique implementation of gunplay, gives CS a rewarding and unrelenting learning curve, as you develop the knowledge and skill to deal with high pressure scenarios and devilish decisions.

In anticipation of the new expansion Madness at the Darkmoon Fair, the Hearthstone team at Blizzard overhauled the progression system. Now, alongside its more accessible new game modes, Battlegrounds and Duels, players have access to a long-awaited system of rewards and achievements. With Madness being a reprise of my favourite expansion and these changes that support new players’ progression, there has never been a better time to get into the jovial Warcraft card game that is Hearthstone.

One of the most relaxing games I’ve ever played, Stardew Valley is full of cute animals, friendly (and not-so-friendly) NPCs, and the chance to escape from the city and start a farm in a small town. You can go fishing, explore the mines, raise farm animals and play with friends to create the perfect farm.

Golf With Your Friends

This game is full of colourful maps of varying difficulty, with a variety of different modes. The different maps and modes help to keep the game feeling fresh after playing it a few times even if the basic concept is quite repetitive across games. You can also create your own levels for added customisation. It’s a great game to pass time with.

Terraria has been my favourite game for a long time. There is so much to do in Terraria – enough for hundreds of hours of gameplay- that you can’t really get bored. There are so many bosses, items to collect and places to explore that the game doesn’t really “end”. Plus, even if you manage to do everything, you can get creative with building cool bases, or try one of the many mods that expand the game even more. Being able to play with friends also makes this game perfect for lockdown.