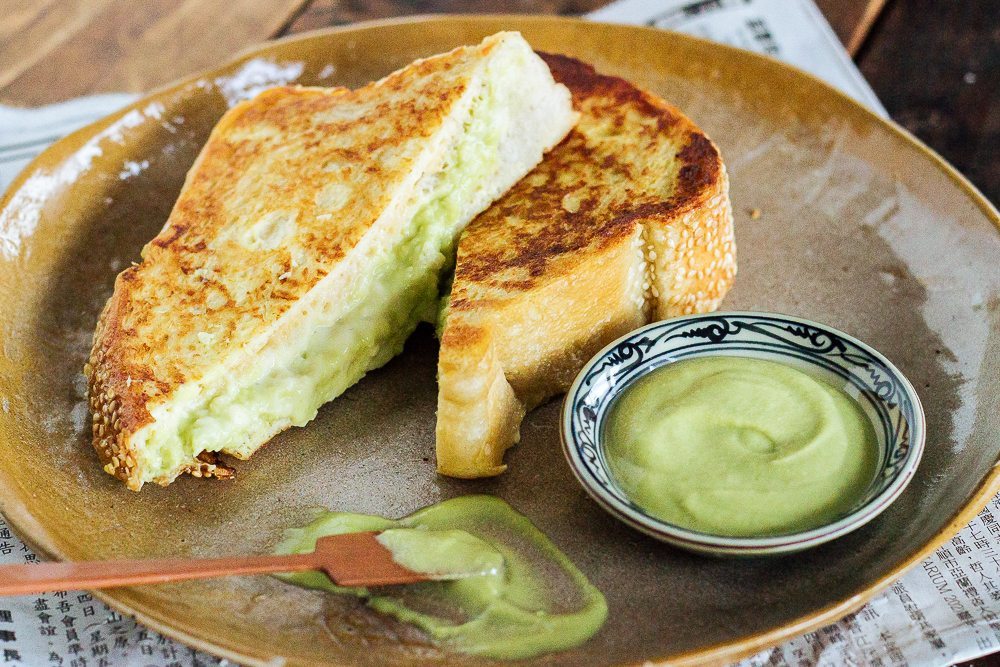 I carefully scrape out a small dollop of green kaya from its glass jar and spread it sparsely on two slices of toast. I’m wary of how conservative I’ll need to be with the servings each time so that I won’t run out before my next trip home. I could probably get another jar from one of the Asian supermarkets here if I searched well enough, but something tells me it probably won’t be the same. Kaya is a coconut egg jam flavoured with pandan leaves, popularly eaten for breakfast on toast in several Southeast Asian countries. As I munch on my breakfast sandwich, the familiar rich jam does the job in offsetting the remarkable blandness of the multigrain corner-shop bread I bought last week. In all honesty, this tastes nothing like the kaya toast sets I’ve eaten in coffee shops at home, but the taste still retains a transportative quality for me.

There was a National Geographic travel article written on kaya toast last year. The writer shares their experience of the ‘sticky, slime-coloured’ jam over thin toasted bread, and the side dishes it is usually eaten with as eggs ‘so undercooked that their whites retained the clarity of newly dead fish eyes’, and a cup of coffee with an ‘oleaginous blackness that rejected the advances of condensed milk. It was not love at first sight.’ This is an unnecessarily roundabout way of describing what is essentially soft-boiled eggs and black coffee. But why has this route been taken in the first place? The representation of ‘ethnic’ food in Western publications has a tendency to be written in the register of the exotic, patronisingly portrayed as equal parts fascinating and repulsive, giving readers a skewed impression of the foreign culture in question that rests on tired Orientalist tropes. Granted, the rest of the article is well-meaning in its observations on the local kopitiam scene, yet it is understandable that Singaporean and Malaysian netizens reacted to the condescension of its opening paragraph with disdain. For many, it wasn’t the first time they’d encountered problematic accounts of Westerners’ dalliances with their food.

The humanness of these ‘far-flung’ regions disappears, and the Otherness emerges.

My search for the same article, over a year later, leads me to find it has been ‘updated from the original version for clarity’: the ‘slime-coloured’ green of the jam has been corrected to ‘chartreuse’. The ‘barely cooked eggs’ no longer bear overstretched comparisons to the parts of dead aquatic animals. The writer’s unfortunate mismatched love has been remedied by the addition of the pacifying remark, ‘yet a passion was born’, at the end.

Another Singaporean food that Western media seems never to tire of is the durian, but discussion of it is almost always limited to patronising wonder about its thorny exterior and strong smell. When it isn’t in the spotlight, it’s often seen together in ‘discoveries’ of other tropical fruits: all dangerous-looking, disgusting-smelling, somehow so much more difficult to peel compared to the mild-mannered apples and oranges that will cooperate with Western fingers and taste buds. Such depictions always draw attention to their foreignness, accentuating images of faraway worlds filled with weird, questionable customs. The humanness of these ‘far-flung’ regions disappears, and the Otherness emerges.

This is symptomatic of wider problems in food media itself. It’s worth pausing to think about why this so often happens in food writing, when we consider both who is writing, and for whom. As it is predominantly produced by and for the same broad demographic – white people in Anglophone countries – it becomes just another avenue in which whiteness is reinforced as the default cultural setting. What doesn’t help this image is the way big food media outlets, like Bon Appetit, are no stranger to racism scandals. In June this year, ex-editor-in-chief Adam Rapport promptly resigned following a resurfaced photo of a problematic Halloween costume in which he was pretending to be a Puerto Rican. A subsequent outpouring of public statements revealed the ugly truth of the mistreatment of Bon Appetit’s minority staff in an exposé of an incredibly toxic culture that enabled them to be tokenized in videos without receiving payment for their services. Assistant food editor Sohla El-Waylly confessed, ‘I’ve been pushed in front of video as a display of diversity’. The fallout of this continues: this October, a video released on their Youtube channel that flaunted a new set of racial minority staff was criticised by many as a performative, easy-to-swallow attempt to cover up damage that had already been done. As Soleil Ho writes in the San Francisco Chronicle, ‘institutions merely replacing bad apples with apples of color will solve very little’.

Maybe, just maybe, the concept of the full English breakfast or the steak and kidney pie could be met with dismissive confusion by someone tucking into a nasi lemak or a bak kut teh thousands of miles away.

Clearly, food media is seldom just about showcasing food. Far from being a safe apolitical sphere, food is yet another space in which the blemishes of history, colonialist legacies, and cultural erasure can leave a generational impression as interactions between ethnic and cultural groups play out in their global capitalist context. The way in which food is presented can sometimes show us how it can also inadvertently create a barrier between cultures while masquerading as a bridge that connects them.

Reading such food review pieces, I often get the feeling that the communities implicated are seldom at the forefront of the writer’s mind as they use descriptions presenting them as ‘exotic’ – a word that possibly exemplifies the culturally reductive descriptions projected onto non-Western foods. The absurdity of this lies in how the nature of something being ‘exotic’ is always relative to the place in question: its actual definition denotes something originating from a distant or foreign place, which could be anywhere. Maybe, just maybe, the concept of the full English breakfast or the steak and kidney pie could be met with dismissive confusion by someone tucking into a nasi lemak or a bak kut teh thousands of miles away. With that in mind, I started to wonder what an article that wrote about British food and culture the way Western publications tend to look at parts of Asia would look like:

“To those whose taste buds are more accustomed to char siu, the meat part of the Sunday Roast may be a bit of a wild card; usually a sort of hardened, flattened hunk of either pork, beef, or lamb, coming in varying shades of beige and brown. It will make every effort to resist as you try – and fail – to make a dent in it with the two oddly shaped metallic utensils you just know you’re gripping wrong in each hand. Be warned: the knife and fork can sometimes be simply impossible – but just resist the urge to ask the waiter for chopsticks, and you’ll definitely become a British-food pro in no time. A greasy, viscous layer of ‘gravy’, a dark brown sauce made from the drippings of meat juices, coats the surface of the meat, oozing slowly across the plate, much like a train ambling through the rolling green hills in Edith Nesbitt’s The Railway Children. While Sunday Roasts are ostensibly eaten as part of the Christian practice of keeping Sunday as a day of worship and rest, you realise that it is a Tuesday. You muse on this peculiar incongruity, surmising it to be a sign of the diminishing importance of religious culture in the face of this country’s increasingly fractious political scene. These people have such endearing little quirks. Beside the meat is a sort of browned roll standing a few centimetres tall, sporting what looks like a starchy crater hole in its middle: the ‘Yorkshire pudding’, a delicacy eaten in the northern county it hails from. Next to this is an assortment of suspiciously softened vegetables, which sport bright hues of green, orange, and faint yellow that serve as a counterpoint to the predominantly brown colour palette. Doesn’t sound particularly appetising, I know – but looks are deceiving! The locals love it, and so will you.”

Culinary Orientalism in Western media coverage of food can also give rise to blanket statements about cultural eating practices that have the power to create racialised myths about entire communities of people. The internet discourse earlier this year on Chinese wet markets and their connection to the COVID-19 pandemic overlooked a crucial fact: that the wholesale market in Wuhan to which the earliest confirmed cases were rumoured to have been exposed does not fit the description of a ‘wet market’ at all. Wet markets, as they are widely known, are actually large produce markets found in Southeast Asia and Hong Kong, usually open-air. Enter one and you’re more likely to see stacked fruits and vegetables in crates, cuts of meats like pork and beef hung from hooks, or seafood laid out on piles of ice or in their own containers. Far from being dingy, exotic, disease-infested places where wild animals run rampant and barbarians guzzle them up with their bare hands, the reality of an Asian wet market is a rather common, everyday sight. It’s actually much closer to a Western farmer’s market. Media reports that failed to distinguish between these kinds of markets and those with live animals or wildlife caused many to subscribe to latent prejudicial views that lumped them all together in a narrative about ‘dirty Chinese eating habits’. This subsequently formed a major catalyst for the spike in Sinophobia and anti-Asian racism in Western countries during the spring months of 2020. As we can see, the consequences of conflating foreign cultures are dangerous.

We need to move away from the idea that whiteness and westernness must be the default standard for media coverage of food, so as to arrive at a standard for representation that brings the voices and experiences of the people from the cultures being represented to the centre instead. Removing food from its cultural context is fundamentally harmful in acts of representation: the food itself does not need to be exoticised, and neither do the people who actually eat it.