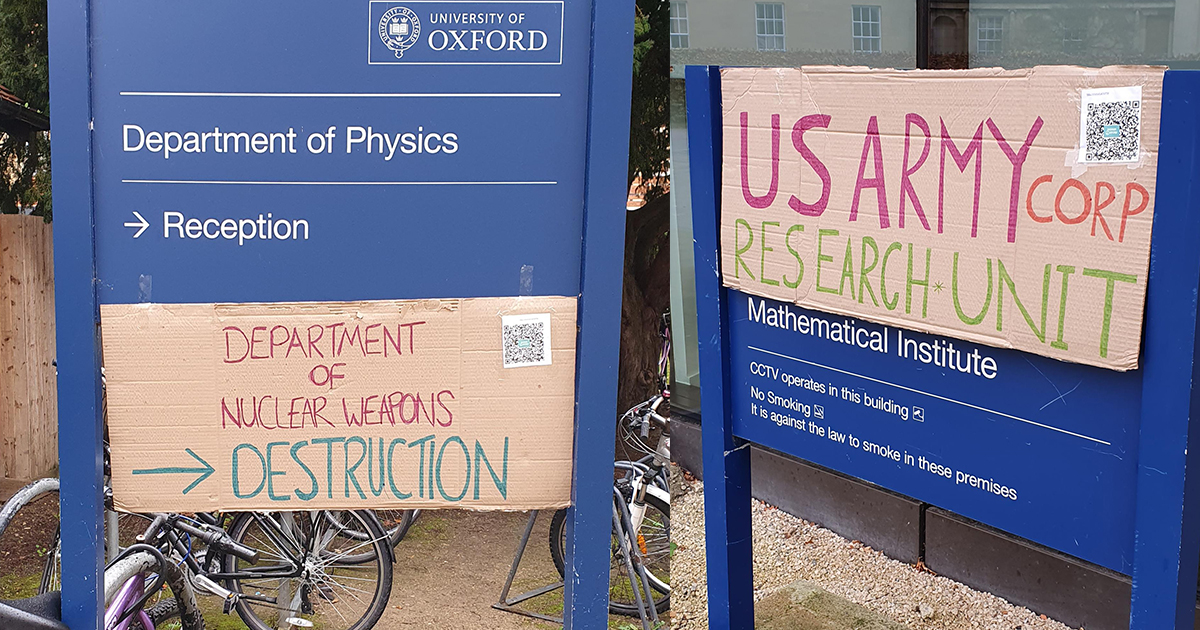 Members of the student and alumni campaign Disarm Oxford on Monday created parody department signage to raise awareness about the University’s links with the arms trade. Departments that receive funding from arms companies in exchange for research on weapon development have been ‘rebranded’.

The Careers Service, which has been criticised by Disarm Oxford for its inconsistent stance on advertising unethical companies, was rebranded as ‘The Careers in War Service’. The new signs also came with QR codes which enabled onlookers to find out more information about arms company links.

The campaign highlighted that: “Currently, Oxford University has strong links with the arms industry, being invested in arms, advertising careers with arms companies, and perhaps most shockingly of all, performing research directly for arms companies, which is also frequently subject to NDAs or directly supervised by employees of these companies as well.

“A 2019 report by Amnesty International has accused seven arms companies linked to Oxford of acting in a way which would expose them and their CEOs to prosecution for war crimes.” 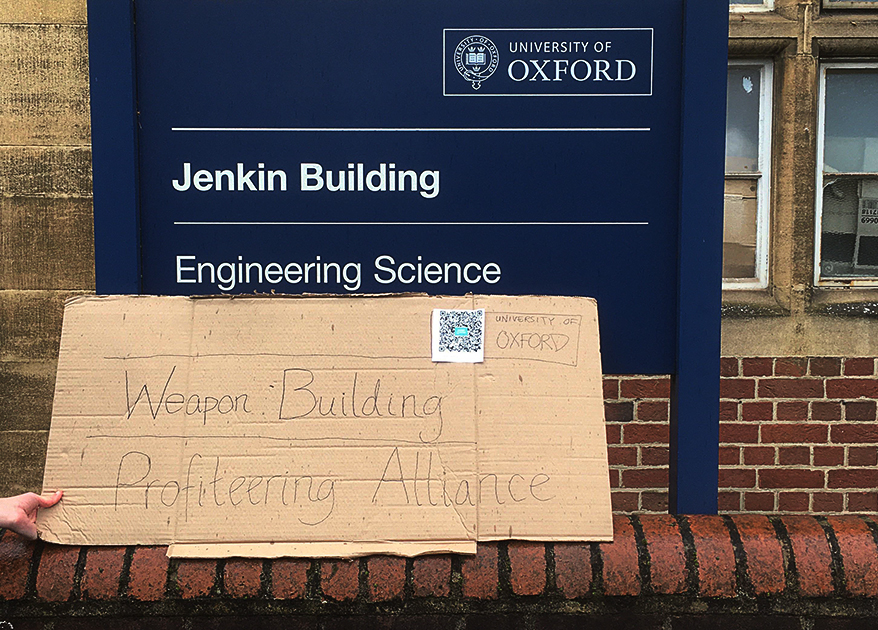 An anonymous Disarm Oxford campaigner hoped the direct action would “encourage students to think about our University’s place in the marketised landscape of higher education.” They continued: “Industrial partnerships with the arms industry mean that weapons companies are receiving cheap labour from Oxford’s top research students; these students, in turn, frequently find that they are unable to control the direction of their work or publish their research, because of the confidential nature of their projects.”

“This is against the principles of academic freedom and intellectual curiosity that Oxford should champion. What we see here is a situation in which arms companies and the money they offer are being prioritised over students. We hope that this small direct action will encourage students to think about our University’s place in the marketised landscape of higher education.”

A spokesperson for Oxford University said: “Oxford University academic research aims to enhance openly available scholarship and knowledge. All potential research funders must first pass ethical scrutiny and be approved by the University’s Committee to Review Donations and Research Funding.”

They continued: “This is a robust, independent system, which takes legal, ethical and reputational issues into consideration. Research projects with defence sector funding advance general scientific understanding with a wide range of subsequent civilian applications, as well as potential application by the sector.” 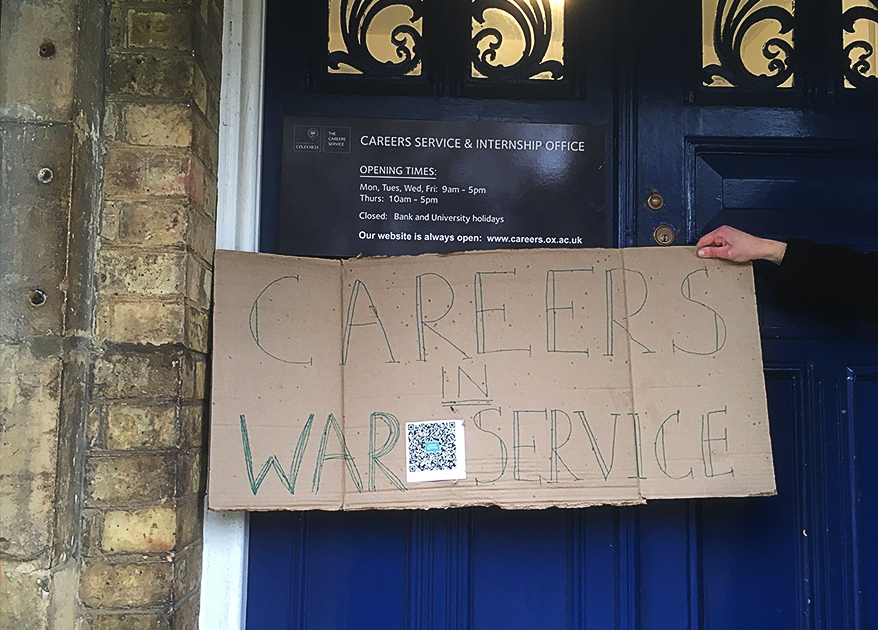 Another anonymous campaigner commented on the international nature of Oxford University. “As an international institution, Oxford cannot distance itself from war and the humanitarian crises resulting from it around the world. I have been happy to see my University beginning to address its relationship with the fossil fuel industry over the last couple of years and starting to consider the way in which its stance on climate affects frontline communities across the globe. I would like to see Oxford give this same attention to its links with the arms industry.”

As well as highlighting links between University departments and the arms trade, Disarm Oxford also seeks to highlight the links between Oxford and the development of lethal autonomous weapons (LAWS). Disarm Oxford has said of the production of LAWS. They argue that robotic weapons remove human dignity and cannot properly discern between military and civilian targets.

“Universities including Oxford are involved in research which contributes to the development of lethal autonomous weapons systems (LAWS), which can select and engage human targets without meaningful human control. Campaigners have outlined the ethical and legal concerns surrounding the use of LAWS, including the fact that such weapons will not be able reliably to distinguish between military and civilian targets, and that allowing machines to make decisions over life and death undermines human dignity.”

Regarding the Career’s Fair, the University spokesperson said: “The Careers Service offers an impartial service which allows students to make informed choices about their futures through access to employers and professional networks. To stay impartial and allow all students to make their own informed decisions, invitations to Service events can be sent to any business that is legitimate.”

All images courtesy of Disarm Oxford

This article was updated 3/12/20 at 15:03 to include a statement from the University of Oxford