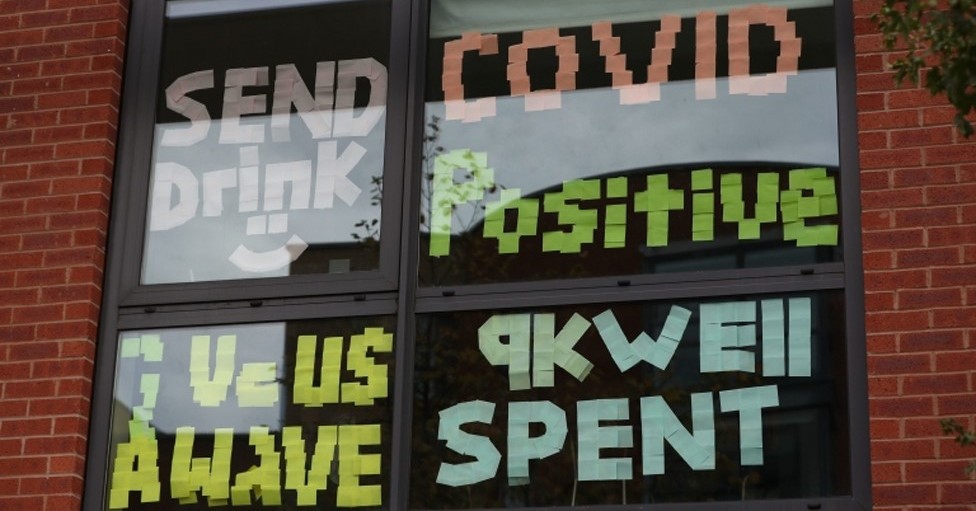 Editorial: Don’t blame students for an outbreak next term

Image description: A window with writing made of post-it notes

On Wednesday, Matt Hancock said that he would agree to receive a coronavirus vaccine on live TV, in response to a challenge from presenter Piers Morgan. Other politicians are in queues to do the same – including Boris Johnson, Nicola Sturgeon, and several past US presidents. Most of us wouldn’t hesitate to get vaccinated against covid, considering how much disruption and grief the disease has caused, but YouGov poll results released in November suggest that almost one in five Brits are ‘unlikely’ to do so. Could making a televised spectacle of the process really bring that figure down?

Many would say yes. The British media has played a huge role in colouring our experiences of the pandemic. In early March, the Telegraph chose a photo of a young woman of about university age to cover Allison Pearson’s column about ‘Generation Me’s ignorance of the need to briefly give up freedoms for the sake of other, more vulnerable people. Young people were being blamed for the rise in covid cases even before lockdown – and in September, health minister Lord Bethel warned that students must ‘behave in the bedroom’ to prevent the spread of the virus, as if one-night stands could do more damage to the country’s recovery than a mass movement of two and a half million people in and out of high-risk areas.

Even Sage has said that the outbreaks seen in university halls weren’t necessarily the cause of students socialising illegally. Professor Susan Mitchie of University College London has said that young people arriving to shared accommodation from all over the country created a “human petri dish”; Jo Grady, general secretary for the University and College Union, has described a rise in cases in university cities as “completely inevitable”. And now, in December, the statistics speak for themselves: almost 20% of covid cases are caused by going to the supermarket, making this the most common exposure setting, whereas only 1.2% of covid cases have been spread through university environments.

This isn’t to say that students don’t have a responsibility for keeping their local communities safe – wearing masks, washing our hands, and self-isolating when we’re symptomatic will remain crucial to protecting others. But the general outcry against the behaviour of young people has largely been misplaced. Throughout the pandemic, media outlets have helped the government to pursue a strategy of blame. In April and May, key workers were shamed for using public transport to make their commutes – later, Matt Hancock blamed the overcautious general public for a shortage of covid tests, despite giving advice that a test should be sought out for any reason and over any doubt. Would it ever be admitted that Eat Out to Help Out – or the private behaviour of MPs and their advisors – could have contributed to the problem?

Covering the impact of a pandemic isn’t easy: it’s been a big task even for the OxStu and for other student papers within our limited remits. Watching Matt Hancock get vaccinated live on Good Morning Britain would probably go a long way towards restoring public trust in the coronavirus jab, but it would also be a start for the government and its ministers in using media channels to foster a more positive relationship with normal people, taking on direct responsibility for big decisions rather than blaming young people and other groups for the country’s problems. Who knows – come next term, students might be treated like capable adults rather than petulant children.