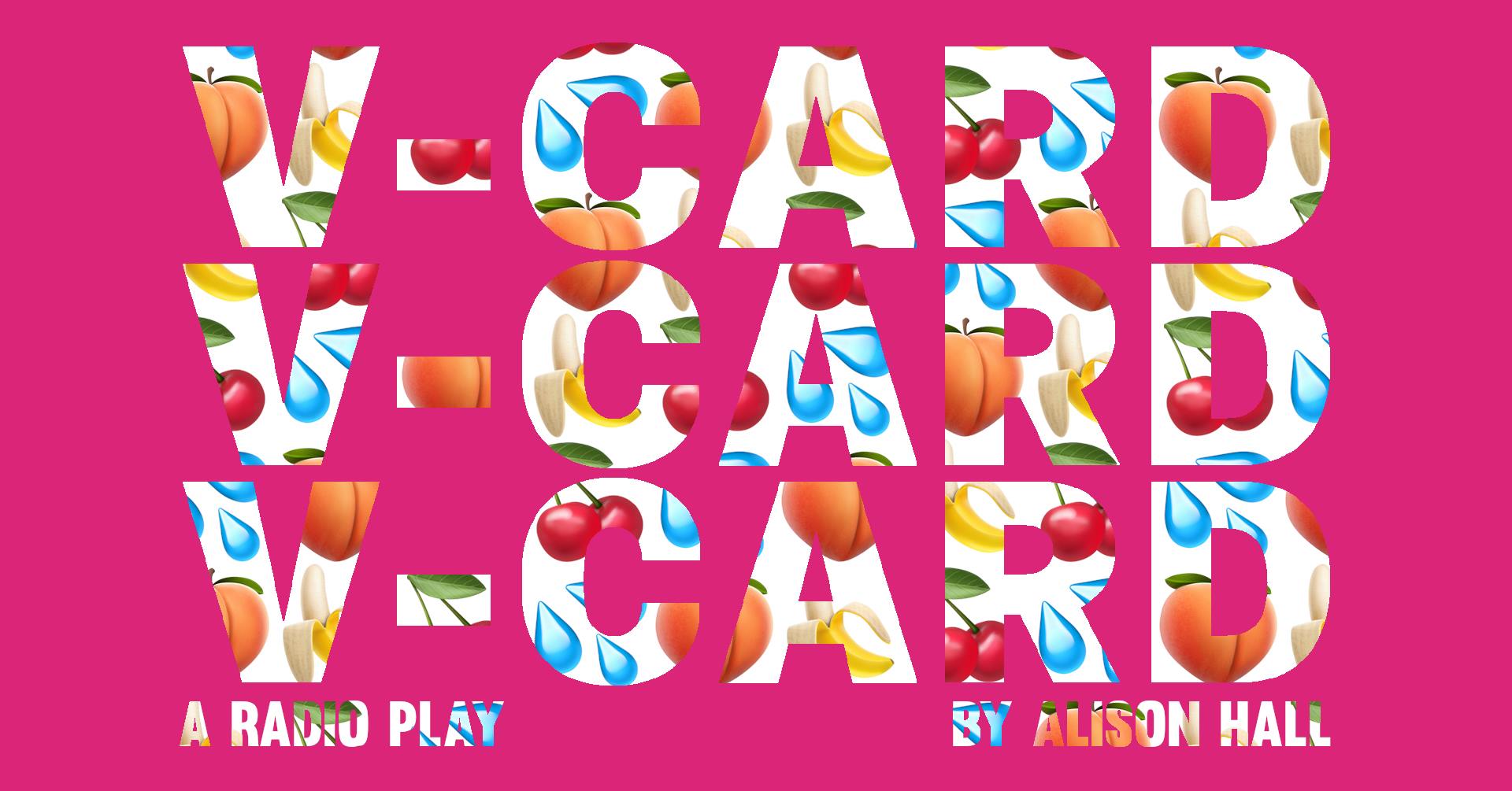 Image Description: the publicity poster for V-Card (a pink background, with ‘V-Card’ written in white and filled with peach, banana, and water drop emojis).

Candid, raw, and laugh out loud funny, V-Card is an unabashed confrontation of societal myths and misconceptions about sex and relationships, made all the more endearing through its likeable characters, all-too relatable mishaps, and hilarious one-liners.

Written, directed, and co-produced by Alison Hall, a 3rd year English student at Wadham College, the radio play follows the story of Hazel, a student caught up in a whirl of pressure from her fellow students and societal expectations to lose her virginity before her 20th birthday. We are first introduced to Hazel as the nosy interrogator of her friend Erin’s one night stand, but quickly see her insecurities laid bare as the script begins to explore head-on important questions about female sexuality and its repercussions, particularly within the student experience.

the script begins to explore head-on important questions about female sexuality and its repercussions, particularly within the student experience

Ellie Fullwood is vivacious in the role, whilst skilfully maintaining a vulnerability and innocence which ultimately make Hazel so loveable and lifelike as a character. Elin Donnelly is equally captivating as Erin, and together with their other flatmates Dylan (Gregor Roach) and Nick (Lorcan Cudlip Cook), create a realistic depiction of peer pressure for Hazel to navigate.  Cook also adds humour in great doses through his second role as God; a hilarious embodiment of Hazel’s Catholic guilt that manifests in her dreams. Freddie is equally well executed, but in a way that makes you want to cry rather than laugh as a painfully real depiction of just about every dating nightmare rolled into one. Mary Woodward’s convincing portrayal of Alex, Hazel’s later love interest, illuminates more serious themes of consent and personal autonomy.

Hazel’s interaction with Robin, brought to life with charm by Grace de Souza, is a delight to see unfold, and Robin’s insight is a welcome breath of fresh air amid the pervasive societal pressures and misconceptions which the play so successfully conjures up and brings to the fore. Though some slightly lengthy silences between lines and scenes coupled with the periodically inconsistent volume occasionally took away from the feeling of being entirely immersed in Hazel’s world, each and every scene is undoubtedly enhanced by Christopher McHugh’s sound effects, which must be commended.

Producing a play of this quality during a pandemic is nothing short of a mean feat, and in a piece for The Oxford Student last month, Hall did not shy away from admitting the difficulties faced in the protracted and erratic run up to the eventual opening night. Considering the multiple setbacks and reconsiderations faced by the team in terms of cast, script and format, I was admittedly skeptical of just how convincing and seamless a radio play could be. However, even unable to escape one final dose of technical difficulties as the play came to inboxes slightly later than planned, I was far from disappointed.

It turned out that the privacy and intimacy of the listening experience resulted in an even more personal and immersive play than I had initially considered – by the end, you’re left wanting nothing more than to give Hazel a huge hug, to get your own dose of life advice from Robin, and to stay as far away as possible from ‘Freaky Freddie’.

Shining a light on societal understandings of sex as well as student dating culture, consent, and questions of LGTBQ+ identity, V-Card is refreshing and uplifting in its multifaceted examination of matters which are all too often made taboo or simply taken as fact. Though not quite the format Hall had originally intended, the play more than achieves its original aim, and I hope the resilience and innovation shown by Hall and her team will encourage others to broaden their horizons not only in practical terms of possibilities for pandemic-era theatre, but also in terms of subject matter. Young people everywhere should listen to V-Card.