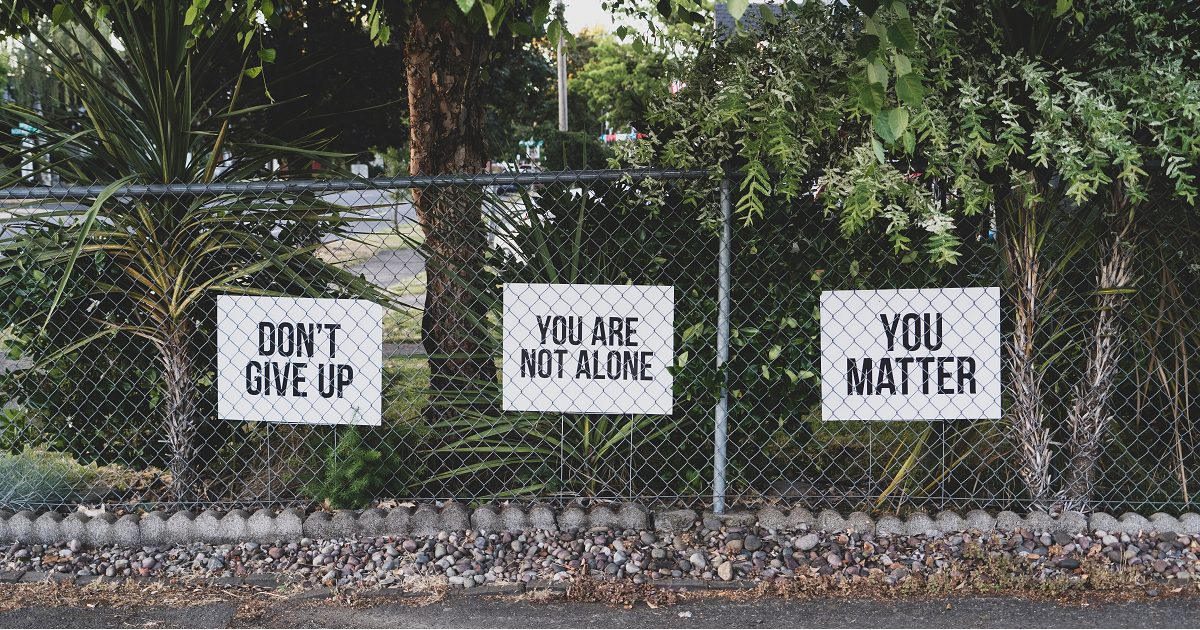 We deserve more for our mental health

Image description: positive messages (“Don’t give up”, “You are not alone”, “You matter”) displayed on signs on a chain link fence.

Student mental health has been at the forefront of many conversations since the first lockdown back in March. Most, if not all, of the administrative emails I have received since the end of Hilary have included a line that sounded something like “Remember to take care of yourself, and reach out if you are experiencing difficulties.” Although I admit that such sentiments are better than nothing, the words ended up sounding quite hollow to me.

The university’s policy on managing student mental health relies on struggling students initiating the process of asking for help. This policy is, of course, by no means exclusive to Oxford. Many people come to access mental health treatment through self-referral, and there is nothing wrong with this being a viable method for getting help.

Self-referral is, however, much easier said than done. Persistent depressive states, among other possible mental health difficulties, can make it difficult even to keep up with friends much less muster the energy to find and contact professionals for help. Especially during lockdown, when so many students have found themselves in isolation with people who are not necessarily their close friends, it can be difficult to find the push or the validation to think, “I need help.”

Many people come to access mental health treatment through self referral, and there is nothing wrong with this being a viable method for getting help. Self-referral is, however, much easier said than done.

Another problem is that most people are woefully ill-equipped to recognise what mental health problems look like. Several people I know who have grown up with mental health issues since early childhood have expressed that they thought their feelings were “normal” and that it was not until their mid to late teenage years that they understood that they were different. From an outside perspective also, the “invisible” nature of mental illness makes it difficult to spot even in our closest friends or family. Unlike physical ailments, we aren’t taught since childhood to check for a fever, congestion, etc., and what kinds of medications we can get from the pharmacy to treat these symptoms. Even when those around us might display the clearest signs possible of needing help with their mental health, we don’t always know how to respond to panic attacks or somebody socially isolating themselves. We lack education about how to spot mental health problems both in ourselves and in others.

Stigma also plays a role in blocking access to mental health treatments. Even the less stigmatised mental health conditions like depression or an anxiety disorder can receive judgments of perceived personal fault from others; when it comes to conditions like borderline personality disorder or schizophrenia, responses from the general public become even more negative and can affect educational or career opportunities. Furthermore, as an investigation by the Oxford Blue revealed this summer, there have been several instances of medical professionals breaching patient confidentiality, leading to forced rustications. Aside from the initial difficulty of reaching out in the first place, it is difficult to feel supported in a university environment where we cannot trust the people we turn to be on our sides.

Not only this but even if all of the help available were genuinely effective and positive, the scarcity of resources is undeniable. Despite what the many emails I received from my college and department appeared to imply, the university’s counselling resources are limited. Even if someone makes the difficult leap to reach out, waitlists are long and have grown longer since the first lockdown, and so they will likely not be able to receive the help they need for weeks to come. I also recently learned that until this term, the counselling service had only employed one BAME counsellor and no black counsellors at all. The counselling centre now has three BAME counsellors in total following the appointment of two black, female counsellors at the start of Michaelmas. This means that until very recently if a student wanted to discuss negative experiences relating to racial discrimination with someone who fully understood their experiences, they would likely have been unable to do so. Given the racially homogenous environment of Oxford, this oversight is concerning, and there are sure to be many other flaws with the service that I am not yet aware of.

Despite what the many emails I received from my college and department appeared to imply, university’s counselling resources are limited.

The university’s counselling centre is also not meant to be a long-term support system, and for anyone with lasting issues who cannot afford private therapy, accessing NHS mental health services is extremely difficult. TalkingSpace Plus (the NHS counselling service in Oxford) triages self-referrals depending on the severity of their symptoms, and will not offer treatment for individuals who they deem are not severe enough. I experienced such a rejection last Michaelmas after months of feeling down. It was not until about a month ago that I tried reaching out to them again, and by then my symptoms had worsened significantly, meaning that I was accepted for treatment. I cannot help but feel that the decline in my mental health over the past year was preventable, had there been a support system that I could actually access.

Despite all of these issues, I see very little effort on the university’s part to actually engage with students and raise awareness for or tackle mental health issues. Most of the welfare events at my college are run by student welfare reps who are no doubt exhausted themselves. Furthermore, I was shocked when, during a welcome-back zoom event earlier this term, the psychology department announced to its students that we should approach the faculty if we have any ideas about how to improve student welfare during the upcoming term, with no mention of departmental efforts.

Furthermore, when I asked one of my tutors, a clinical psychologist if it wasn’t invalidating to separate patients into “low” and “severe” depression groups, he said that this distinction was never actually communicated to patients in clinical practice – something I know to be untrue through my own experiences with trying to access mental health services. Even those who are experts in mental health, or at least have colleagues who, appear to have put in little thought as to help students even in a time of growing national problems. Some are apparently even ignorant about the reality of mental health services here in Oxford. This is all baffling and disheartening to me.

We have known for decades that Oxford is a highly stressful place where people choose to or are forced to rusticate each year, where breakdowns over coursework are normalised, and “5th week blues” is an accepted part of life.

The university has, of course, taken some steps in the past few months. As mentioned earlier, it has recently hired two new black counsellors, as well as appointing a new Mental Health Task Force that aims to develop plans for expanding mental health resources at the university. But in some ways, this all feels too little, too late. We have known for decades that Oxford is a highly stressful place where people choose to or are forced to rusticate each year, where breakdowns over coursework are normalised, and “5th-week blues” is an accepted part of life. We know that this university is not good for mental health, and there have always been students who need help. And there still are. The current system is not working, and students need and deserve resources now instead of just empty words in emails.