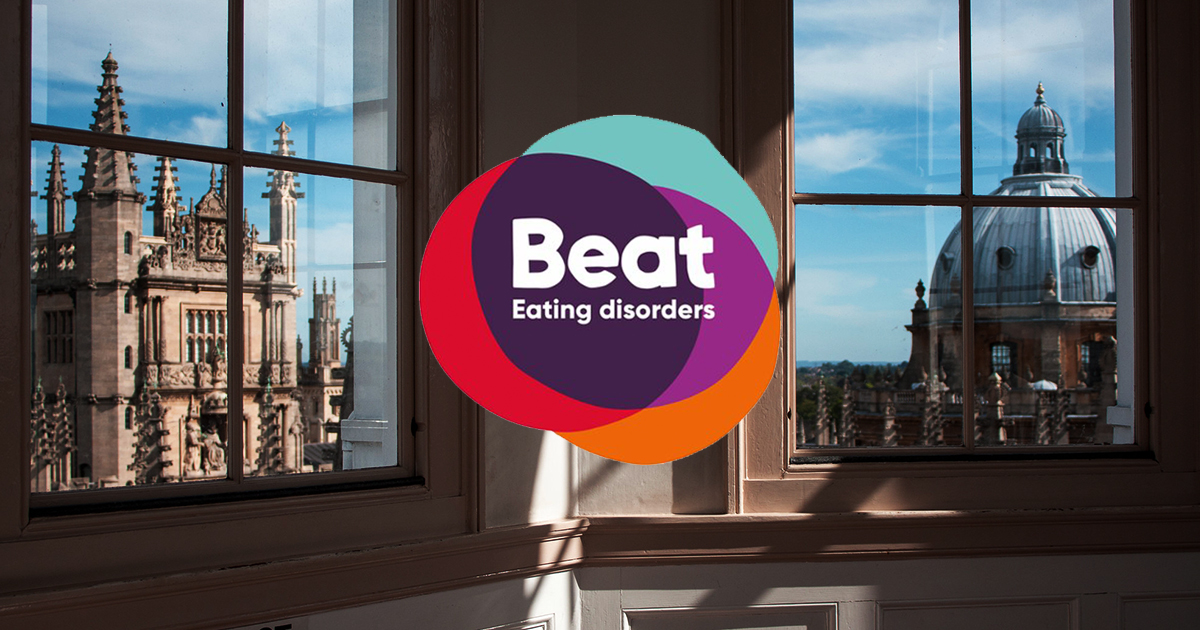 Image Description: Views over Oxford City from the Sheldonian Theatre Cupola with the Beat logo

The Beat campaign’s aim is “an end to the pain and suffering caused by these serious mental illnesses.” They estimate that Eating Disorders affect around 1.25 million people in the UK, 25% of whom are male and NHS research revealed that up to 6.4% of adults have displayed signs of an Eating Disorder (Adult Psychiatric Morbidity Survey, 2007).

Isabel Creed is a DPhil student at St Edmund Hall and is one of the students heading up this campaign for Oxford. She has herself recovered from an Eating Disorder and is keen to emphasise the importance of effective services to better aid in the recovery of people who are affected by Eating Disorders. Concerns regarding funding, and the impact of Covid-19 on the support available, have been highlighted in a letter to local MPs in the hopes of encouraging changes in the way that these services operate, and how funding is allocated.

Emphasising the importance of this campaign, Isabel said: “I have a personal motive to campaign for eating disorder having suffered and recovered from anorexia nervosa as an undergraduate at Oxford University. A condition that almost cost me my life.”

Additionally, this is something that she has poured much of her energy into and was pushing for change before the coronavirus outbreak:

“I have been campaigning for about 9 months even before the pandemic about the crisis in eating disorder and mental health crisis caused by Covid. I  have met many MPs to discuss this from all three parties in England. So far, nothing has been done so we hope to get people behind the campaign with signatures will help raise awareness of the issue and finally get something done. There are so many reports of preventable deaths something needs to be done”

Other students involved in the campaign include Esthy Hung and Roisin McCallion, who also have very personal motives behind their support.

Roisin commented she was diagnosed with an eating disorder 2 years before moving to Oxford as a student. “Unfortunately this means I’m all too aware of consequences the gaps in services can have. I ended up spending more of my undergrad degree in an inpatient unit than I did actually at university. I firmly believe that if it wasn’t for being put back on waiting lists between admissions this would not be the case. Following my undergrad, I worked as VP Welfare and Equal Opportunities at Oxford SU and so know this problem spreads way beyond me. I’m hoping that the letter can go some of the ways to help bring about the changes needed as it often seems eating disorders just go completely forgotten.”

Esthy Hung began her studies at the University of Oxford in October 2016 and did not see the eating disorders team in Oxford until the end of November, despite being referred by a consultant psychiatrist upon discharge from a long hospital admission earlier that year.

“There was no support they could offer me at that point other than to tell me that it was recommended I be admitted to hospital again and wait for me to deteriorate further. By January 2017 I became critically unwell and risked sudden death, by which point I was admitted to hospital. I was very lucky that there was a hospital bed available at the time. It is not acceptable, nor does it make sense from a financial perspective, to offer individuals very little in the way of support until they become extremely unwell and require lengthy hospital admissions.”

In 2017/18, the average routine waiting time for adults to receive treatment was 9 weeks. In Oxfordshire, that time was 48 weeks. “[This is] already one of the worst waiting times nationally. In recent months the average waiting time has increased to 100 weeks, which is beyond unacceptable.”

There are claims of services being “at breaking point” and the students have worked with clinicians at Cotswold House, a referral centre for adults with Eating Disorders, to provide arguments that more funding is needed for these services. They say that the centre has been “forced” to cut back on the services it provides and can only accept referrals for “severe or extreme Anorexia Nervosa or Bulimia Nervosa.”

There are also concerns regarding waiting lists and a lack of hospital beds for adult patients with Eating Disorders and the disruption that this causes to patients’ lives and their journey to recovery. The fact that many patients have to travel long distances for a hospital bed means that they are forced to spend less time with family and friends which can provide a crucial support network.

The letter to the University, specifically, calls for steps to be taken in “increasing the provision of specialised support for those affected by eating disorders.” They also claim that in a group of students with eating disorders 70% of them did not feel that University counsellors or nurses had “sufficient experience with eating disorders.” To improve this they are calling for the provision of a dietician and the establishment of student-led peer support groups to increase the effectiveness of university services.

Like many mental health issues, this has been exaggerated by the pandemic and these concerned students are trying to make changes in the University and the local community.

The letter to MPs can be found here