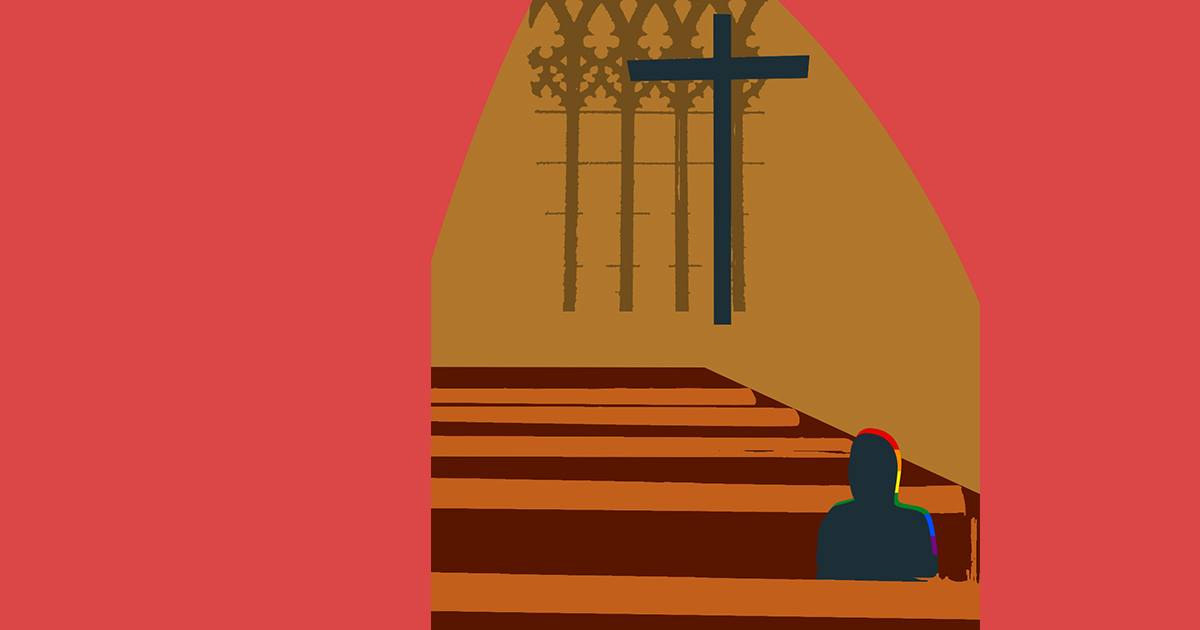 A queer Christian perspective on the OICCU

Queerness and Christianity is a unique intersection of identities, one that many still see as conflicting. This is becoming more and more evident in Oxford, where Christian communities are – intentionally or not – alienating and rejecting LGBT+ people of faith.

Balancing my own faith and sexuality has been a long and difficult journey, and I am by no means at the end of it. I am happy identifying as both a bisexual woman and a Christian Quaker, but it took me a long time to align those two parts of myself. When I first realised aged 11 that I liked girls, I went to bed that night and prayed to God that he would make me straight. I grew up attending a mix of Anglican and Catholic church services but as I got older and explored both my faith and sexuality, I felt more and more disconnected from the teachings of the Church.

I could not align the lessons of peace and forgiveness with the violence committed by people around the world in the name of Jesus. Watching debates over same-sex marriage play out on TV, I didn’t understand why a handful of decontextualized Bible verses were cherry-picked over the overwhelming messages of love, acceptance and peace radiating from the same book. As I came out and came to terms with my sexuality, I withdrew from my faith and tried to hide it. It seemed impossible for me to have both.

When I arrived in Oxford as a fresher, I was excited at the opportunity to experience new Church communities and find a Church that would unequivocally welcome me, with no strings attached. I attended one of the Christian Union Freshers events at St Ebbe’s church, and while the people I met were lovely, I noticed sexuality was a topic danced around and avoided. Here it seemed I would still need to pick between my faith and sexuality. I went away and researched the churches in Oxford, trying to find one that was explicitly queer-affirming.

This search, however, turned out to be more complicated than I expected. The recent Oxford Student article on homophobia within the university’s Christian Union contained disappointing but unsurprising revelations. While I know many members of OICCU who have nothing but love and acceptance for me in their hearts, there have been too many questionable instances for me to not be wary of the organisation.

The University’s LGBTQ+ Society has a page listing affirming churches in Oxford: of the 99 churches in Oxford, 6 are listed as being LGBTQ-friendly. Notably absent is St Ebbe’s Church, one of the largest churches in Oxford and the basecamp of many OICCU events. This is likely because of the views of its rector, Vaughan Roberts.

In addition to being Rector, Vaughan Roberts is a prolific author with numerous books published on Christian approaches to modern topics. One of them is titled Talking Points: Transgender, which seeks to give a Christian approach to tackling ‘the transgender issue’. Another of his books, Battles Christians Face, devotes a chapter to combating homosexual desires, something that Roberts admits he himself experiences. In a widely-shared interview with Julian Hardyman – who, in a particularly cruel and ironic twist, became pastor of his Cambridge church after his predecessor was chased out for being gay – he explains that he has chosen to remain single and celibate, due to his conviction that ‘the Bible is consistently negative about homosexual sex, and, indeed, about any sex outside heterosexual marriage’, and regularly prays for LGBT members of his congregation to do the same.

Roberts uses a number of questionable metaphors to describe homosexual attraction, referring to it as an ‘unchosen relational disability’ in one sermon, and comparing homosexuality to ‘the experience of blindness, depression, alcoholism’ in one article. Using the language of disability, mental illness and addiction to describe sexuality does a disservice to all involved communities, especially given the historical categorisation of homosexuality as a mental illness. In another sermon, he promises that ‘change can happen’ in regards to sexuality, using the example of a former college LGBTQ+ Rep at Oxford who went on to marry a woman after realising he was basing his identity on being gay, rather than being Christian. Presenting sexuality as changeable through religion has a long and violent history, and while Roberts briefly refers to the harm done by conversion therapies, his rhetoric implicitly affirms the ideology that drives such practices.

These statements have the capacity to be intensely harmful to vulnerable LGBTQ+ students at Oxford. By sending a message that the only way to avoid damnation is to cut yourself off from experiencing love and pray for change, Roberts pushes people further away from affirming support networks and instead towards self-hatred. This is not hyperbolic but a real and present issue with tangible consequences: in an anonymous Oxfess submission, one person detailed how attending St Ebbe’s and hearing similar sermons had left them contemplating suicide. LGBTQ+ individuals are already far more likely to experience depression, anxiety and suicidal ideation than the general population which many studies have found can come as a result of the discrimination and hostility they face. A popular and influential Rector publicising these views to the congregation and wider student body is not only alienating but also downright dangerous.

After researching the public statements and positions of all speakers recently hosted by the OICCU, some troubling links emerged. Since May 2019, there have been 14 speaker events. Out of these, 8 of the external speakers have been found to have links to anti-LGBTQ+ organisations. The stances of the remaining 6 speakers were unclear from online research. There were 0 speakers at the Christian Union in the last 17 months with a publically LGBTQ+-affirming stance.

A number of the speakers hold high-ranking positions or are affiliated with the Zacharias Trust, an evangelical Christian apologist organisation founded by the late Ravi Zacharias, a minister and author this year accused of sexual harassment. The trust has prominent ties to the Billy Graham Evangelical Association, who have previously advocated for conversion therapy and describe homosexuality as ‘a lust that destroys the physical body, ruins relationships and brings perpetual suffering to the soul’, as well as the far-right group Christian Concern, who have defended the practice of conversion therapy and call for children to be protected from the ‘transgender agenda’.

The Zacharias Trust itself has published numerous web articles on homosexuality, including one that uses scripture to detail how homosexual desire is a ‘sin’, ‘not what God originally intended’ as it ‘leads people to destruction’ and promises that a person’s sexuality may be changed through religion. As a result of these views, the University of Oxford came under criticism last year for continuing to host the Trust’s annual summer camp, and the Trust has been banned from a number of Oxford colleges including Trinity, Jesus and Lady Margaret Hall due to the homophobic, misogynistic and Islamophobic views they have espoused.

One of the most recent OICCU events ‘Examining the Evidence: Did Jesus really rise from the dead?’ featured Sir Jeremy Cooke, a former High Court Judge, as a key speaker. Cooke is also a member and former Vice President of the Lawyers’ Christian Fellowship (LCF), an evangelical association that birthed Christian Concern (the founder, Andrea Williams, is the LCF’s former director of public policy) and retains strong links with them. Cooke himself has been criticised in the national press for the unusually harsh sentencing of a woman who performed an abortion on herself, as well as for asserting the superiority of Christianity over Islam in the case of Stephen Timms.

Last year, the OICCU hosted William Lane Craig, a philosopher and theologian who is an outspoken advocate for conversion therapy. In an article, he urges LGBTQ+ individuals to seek ‘professional Christian counselling’ and equates tolerating homosexuality with Holocaust denial, further going on to describe homosexuality as ‘one of the most self-destructive and harmful behaviours a person could engage in’ with an ‘almost compulsive promiscuity’.

Two weeks before this, the OICCU held a ‘Debate Night’ that featured Jonathan McLatchie as a key speaker. He is a debater who was once kicked off the Newcastle University Chess League Team for sharing an article and quote which called the LGBTQ+ movement ‘perverse’, and has previously accused British Muslims of ‘stealth Jihad’ with the ultimate aim to ‘oppress and subjugate non-Muslims’.

While none of the OICCU events were centred on discussing sexuality and gender identity, the views of the speakers are nonetheless relevant: by inviting them to talk at the university, a tacit acceptance and endorsement of their views is offered. By repeatedly inviting those opposed to LGBTQ+ rights to speak at the university, the Christian Union risks alienating the LGBTQ+ community and its allies, making them feel uncomfortable and unwelcome at their events.

This year has seen a 20% rise in police reports of homophobic hate crime, which have been rising dramatically for the past 5 years. Within Oxford, a 2018 report found that nearly two thirds (63%) of transgender students responding to the survey said they had experienced transphobia or discrimination at the University of Oxford. The comments and views expressed by those belonging to prominent Christian organisations in Oxford only further the hurt caused to the LGBTQ+ community here. Our faiths and sexualities do not have to exist in opposition, many live happy, fulfilled lives as openly queer people of faith, and for anyone to imply otherwise is not just damaging but wrong.

To me, the overwhelming message of the Bible, of Christianity, is love. Love is celebrated in the Bible above almost all else – the word ‘love’ actually appears in the Bible around 800 times, depending on the translation. And the love that I feel, in my heart, when I look at my girlfriend, or hold her hand, or kiss her, is the most pure feeling of love that I’ve felt. There is nothing in that love that feels wrong or unnatural. She brings me so much happiness and joy every day; knowing that I love her, and she loves me, is one of the best feelings in the world. And I don’t believe that a loving God, my God, could be against that much joy and love.

Update: This article has been updated to reflect that the use of the word perverse was in the article that McLatchie was removed from the Newcastle University Chess Club for sharing.