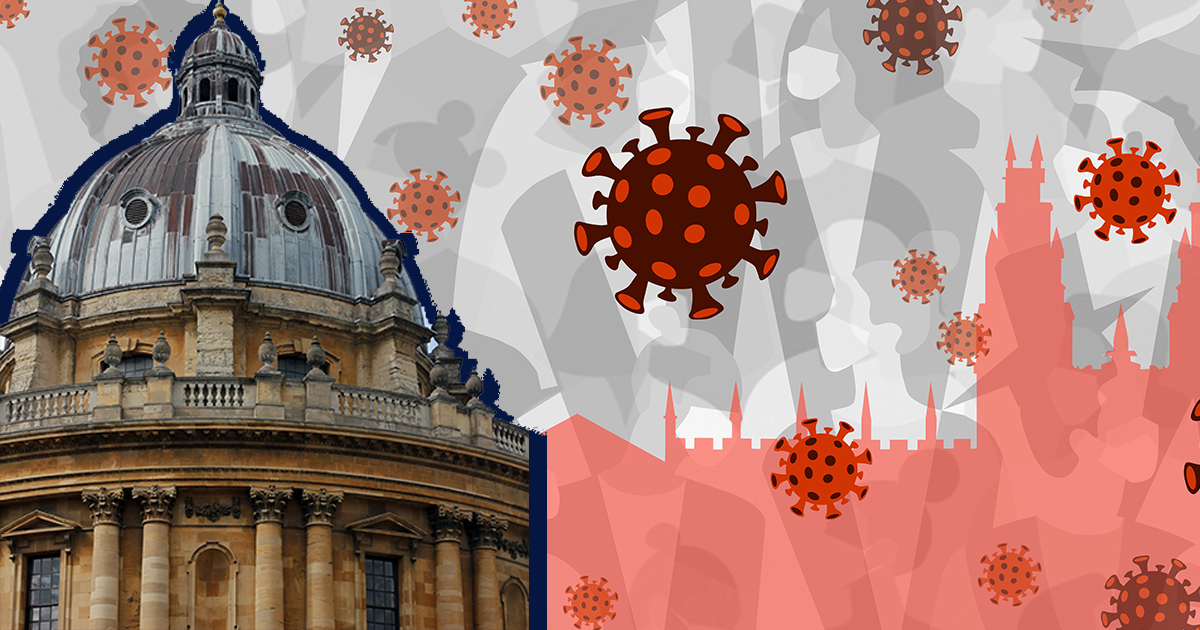 Reaction as Oxford-AstraZeneca vaccine approved for use in UK

Image Description: The Radcliffe Camera on a background of grey and red with images of the virus.

The UK has approved the Oxford ChAdOx1 nCoV-19 vaccine for emergency use. 100 million doses have been ordered, and will begin to be administered from Monday.

The University of Oxford “welcomes the news” as the vaccine will now be able to be rolled out across the four nations. The vaccine is administered in two doses, similar to others such as the Pfizer vaccine. However, this vaccine differs from the Pfizer and Moderna vaccines in that it can be stored at “fridge temperature” which will make distribution much easier, hopefully allowing for faster inoculation.

“The regulator’s assessment that this is a safe and effective vaccine is a landmark moment and an endorsement of the huge effort from a devoted international team of researchers and our dedicated trial participants. Though this is just the beginning, we will start to get ahead of the pandemic, protect health and and economies when the vulnerable are vaccinated everywhere, as many as possible as soon as possible”.

Professor Sarah Gilbert, Professor of Vaccinology at the University of Oxford commented: “This is a day for the team developing the vaccine to celebrate, after a year of extremely hard work under difficult circumstances. Now that the first authorisation of the vaccine outside of clinical trials has been granted, we still have more to do and will continue to provide more data to multiple regulatory authorities, until we are able to see the vaccine being used to save lives around the world.”

A large part of the development of this vaccine is that it will be sold at cost, in contrast to the Pfizer and Moderna vaccines which are sold at a profit. This was highlighted by Professor Adam Hill, Director of the Jenner institute, who emphasised: “A key element of Oxford’s partnership with AstraZeneca is the joint commitment to provide the vaccine on a not-for-profit basis for the duration of the pandemic across the world, and in perpetuity to low and middle income countries.”

Boris Johnson, Prime Minister of the UK, tweeted that the approval was “truly fantastic news- and a triumph for British science that the @UniofOxofrd / @AstraZeneca vaccine has been approved for use. We will now move to vaccinate as many people as possible.”

It is truly fantastic news – and a triumph for British science – that the @UniofOxford /@AstraZeneca vaccine has been approved for use.

We will now move to vaccinate as many people as quickly as possible. pic.twitter.com/cR4pRdZJlT

Keir Starmer, leader of the opposition, tweeted: “Fantastic news. Thank you to everyone involved, from the scientists to the volunteers. We now need a national effort to get vaccinations across the country.”

Even Piers Morgan took to twitter to share his delight at the news and urge the government to roll out the vaccine quickly: “Brilliant news on the Oxford vaccine. Govt must break the bank to get first dose jabs rolled out to as many people as possible, as fast as possible. Bring in the armed forces, local communities, retired docs/nurses- whatever it takes. Speed is imperative. Let’s do it.”

Matt Hancock told BBC news that “we can now vaccinate everyone, except of course for children because this vaccine has not been trialed on children.” There is still a priority list with people under 50 right at the bottom but this is a big step towards herd immunity and not something that the government has previously declared.

However, with the UK seeing massive spikes in cases over the new strain that has broken out vaccination is more important than ever. We don’t know the exact timeline of getting the population vaccinated but let’s hope that this is a further step out of the woods and towards a more normal 2021.”

The Health Secretary will set out further details of changes to the Tier system and how the vaccine will be implemented across the country later today in the House of Commons.