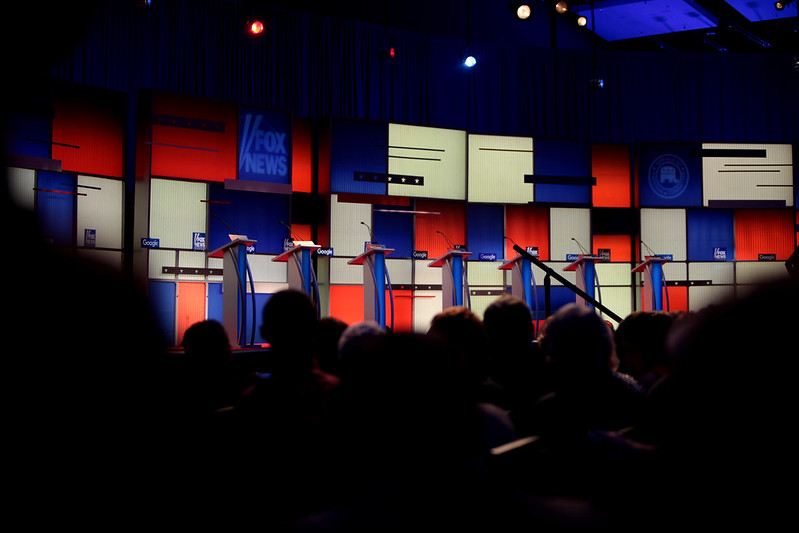 Image description: Stage at the final Republican Party debate, hosted by Fox News, before the 2016 Iowa caucuses at the Iowa Events Center in Des Moines, Iowa.

When was enough, enough? That is the question on which the Republican Party, its representatives and its leadership these past four years will be judged by history.

Last week, America and the world watched in dazed shock as the Capitol in Washington, D.C. was stormed by a gang of Nazis, neo-confederates and other thugs. As the members of the House of Representatives and Senate were rushed to safety, as makeshift barriers were placed in front of the doors of these sacred chambers of democracy, as the mob ran riot in the halls and urinated on the side of the People’s House, one cannot know what was going through the minds of Republican lawmakers.

But it is easy to imagine that, as they reflected on this disgrace, some of them asked themselves when it became inevitable. At what point should they have turned around and said “stop”? When did their obsequious kowtowing to a wannabe tyrant, Donald Trump, cross an invisible line?

Was it when he called Mexicans rapists, and they laughed? Or was it when he called Nazis and white supremacists ‘very fine people’, and they rationalised it? Perhaps it was when he locked up children in cages, and they applauded his tough hand at the border. Then again, it could have been when he cleared peaceful protestors with brute force for a photo opportunity. When, some Republicans might be asking themselves, if they have any decency left, was enough really and truly enough?

But the secret is that there was no magical turning point when it became too much. The encroachment of fascism is an insidious and slowly developing disease. With every statement they issued in favour of the president, with every calumny they excused, Republicans who knew better fed the disease, until this week it literally overwhelmed them.

Throughout the Trump years, the question was asked: “how could they let this happen?”. The ‘they’ were the grownups in the room, the stalwarts of American conservatism whom naive progressive pundits often assumed would come to the rescue and control the president.

The answer to this question is simple and self-evident. These men – it was usually men – and women might have come into politics with high aspirations and ideals. But once they were there, they realised that it was difficult to survive in Washington, and even harder to thrive. And so, they acquiesced to whatever their president did, excused anything to maintain their positions. Afraid of their primary electorates, Republican politicians collapsed like dominos and put their own careers ahead of the country.

The secret is that there was no magical turning point when it became too much. The encroachment of fascism is an insidious and slowly developing disease. With every statement they issued in favour of the president, Republicans who knew better fed the disease, until this week it literally overwhelmed them.

No one man can destroy a democracy. Donald Trump is a narcissistic moron, and if he had not been enabled, he would have destroyed himself very quickly. The erosion of the American Republic at the hands of the supposed “conservatives” who for years have delegitimized the other party, targeted minorities at the ballot box and stoked racism, created the conditions for Trump in the first place. Once he reached the presidency, any faintheartedness about his brazenness naturally disappeared.

Republican former critics were willing to parade their hypocrisy and spinelessness in broad daylight. Take Lindsey Graham, Senator from South Carolina.  He had recommended Trump’s expulsion from the Republican Party. That was before Trump won the 2016 election, of course. Afterwards, there was little Graham would not do for his beloved Trump, even as the president insulted his dead friend John McCain.

They were also willing to be embarrassed and debase themselves before their new king. During the 2016 primaries, Senator Ted Cruz of Texas had to endure Trump insulting his wife and linking his father to Lee Harvey Oswald. Last Wednesday, it was Cruz, a man whose cowardice is only surpassed by his amorality, who led the charge against a free and fair election in the Senate, on behalf of his master.

Last Wednesday, before debate was disrupted in the Senate, Senator Mitch McConnell gave a fine speech, four years too late. Calling the certification of Joe Biden’s election win ‘the most important vote I’ve ever cast’, the GOP Senate Majority Leader told his colleagues: ‘We cannot keep drifting apart into two separate tribes with a separate set of facts and separate realities, with nothing in common except our hostility towards each other and mistrust for the few national institutions that we all still share.’

Too true. But this is not how McConnell and his party have behaved these past four years. History will remember their abject cowardice in the face of fascism, and they will have to live with the stain of their behaviour for the rest of their lives. They are guilty men.

This has been a tale of what happens without courage. When John F. Kennedy was a young senator, recovering from life-threatening medical problems in hospital, he penned Profiles in Courage. It was a collection of sketches of senators who stood up to their parties or constituents to do what they thought right. Today, there are many values missing from our politicians in the West: compassion, decency and competence, to name just three. But the greatest political virtue is courage, without which no other virtue can hope to survive, and it is courage which is most lacking.

It has become hackneyed to point out that the only thing necessary for evil is for good people to do nothing. But it is true, and the nightmare of this presidency has proved it yet again.

History will remember their abject cowardice in the face of fascism, and they will have to live with the stain of their behaviour for the rest of their lives. They are guilty men.

Some of the Republicans in Congress were never good people. They were moral mediocrities, in it for themselves. But even those individuals never planned this. They never planned for a time in their near future when a mob, frenzied by lies they had entertained, would invade the Capitol. They woke up every day and brushed their teeth and combed their hair and kissed their spouses and children goodbye and set off to work. They did not conceive how it would end. They were too busy selling themselves bit by bit each day to see what their cowardice was doing. Their moral failure is a personal tragedy, but it is the rest of America which suffers.

The whole Western world is afflicted by the curse of leaders without courage. Boris Johnson’s hopeless government here in the UK is a brilliant example. Last Wednesday, in Washington, we saw what happens when the people we send to represent us cannot, in Kipling’s words, keep their heads when all about them are losing theirs. It is time politicians did their moral duty. The Republicans in the Senate must now impeach that criminal, President Trump. Only then can they hope to expiate their guilt.