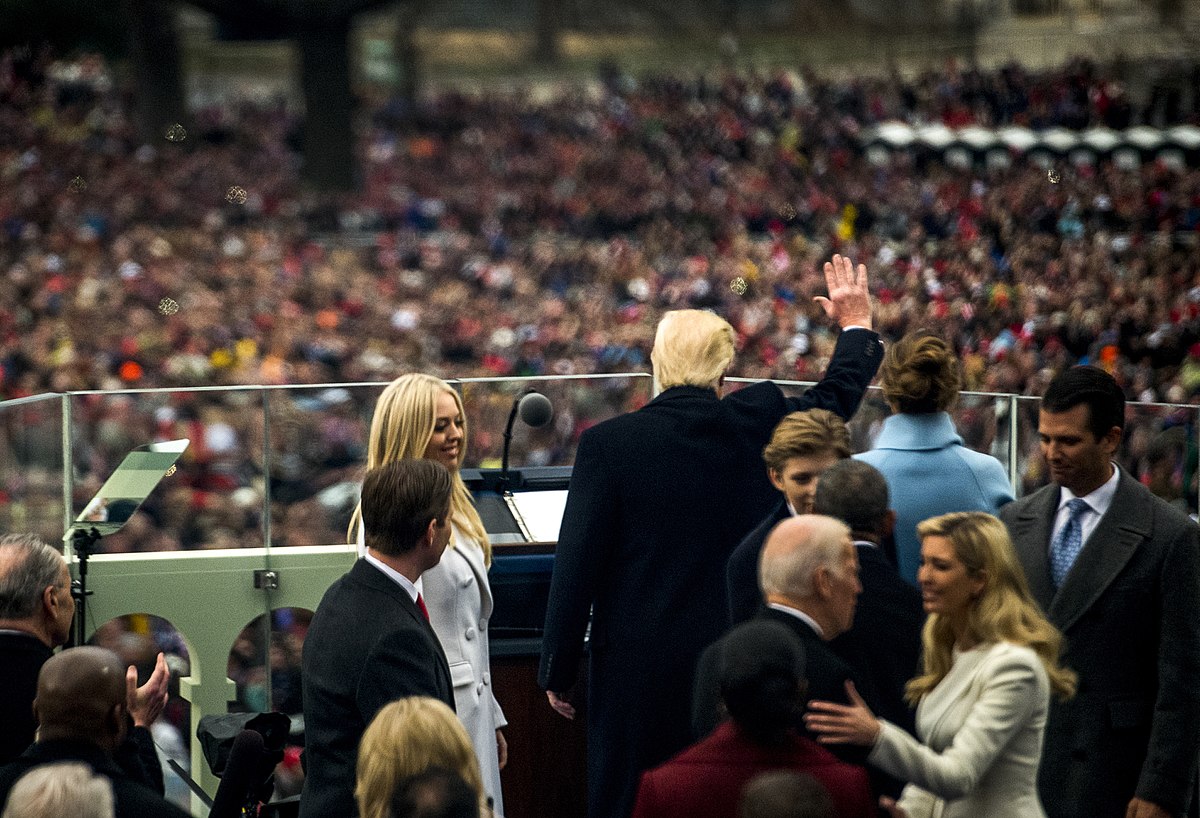 The Politics of Legacy

Image description: Trump waves to the crowd at his 2017 inauguration.

Election night, 2016. The atmosphere in the Clinton camp is somber, as most of the key battleground states have already been called for the Republican candidate, Donald Trump. Suddenly, the phone rings for former Secretary of State Hillary Clinton. On the other end of the call is President Obama, and he is telling her it is time to concede.

This phone call, which effectively marked the beginning of the end of the 2016 US Presidential election, may seem ancient history in the wake of more recent chaos. To me though, it perfectly encapsulates a phenomenon too often overlooked in discourse: the politics of legacy.

Obama, it was claimed, in making the call, was primarily concerned with ensuring that his imminent exit from the White House would be followed by that treasured American hallmark of democracy: a peaceful transition of power. This mattered to him not because of future political ambitions, indeed as a President coming to the end of his second term, there was little else for him to aspire to.

It mattered because of what it meant for his legacy. How would history judge the Obama years, and how much of his hard work and achievements in other areas (most significantly in healthcare) could be undone by a disorderly and contested handover?

This is something all politicians are acutely aware of, particularly as they come to the end of their time in public life. For Obama himself, the question of legacy is a mixed bag. On the one hand, coming out of office with no major scandals to his name and the historic significance of being the first black President lend to a favourable recollection of the Obama administration.

On the other, the election of the reactionary Donald Trump in 2016 and the rejection of Obama-era centrism by modern young progressives could serve as a repudiation. Ultimately, the recent election of Obama’s own former Vice President, Joe Biden, owed in part to an effort to rebuild the Obama coalition, likely secures his legacy as generally positive, if a little unproductive.

Others have proven less effective on cultivating a favourable legacy. Obama’s predecessor in the Oval Office, George Bush, has seen his own legacy forever tainted by the Iraq war, and in the age of Trumpism appears to have been roundly rejected on all sides of the political aisle.

Though Bush may have garnered some good will from his efforts to portray himself as the face of moderate Republicanism in opposition to Trump, it is difficult to argue that the Bush administrations will ever be held up as the pinnacle of good politics.

The issue of legacy in politics is not simply confined to the US. One can often tell a leader who succeeds in this department by how their successors describe them. Theresa May praising the achievements of Clement Attlee, following her elevation to the premiership of the U.K. is a perfect example, doubly so given the fact the two belonged to different political parties.

Similarly, many French politicians are ever-eager to present themselves as a modern-day De Gaulle, regardless of their party affiliation. Such figures become emblematic of national identity and patriotism, often leading to a collective revisionism that glosses over their flaws and failings.

By contrast, political figures who were less significant in real terms struggle to generate any such recognition. One could argue this is a symptom of our highly dramatized politics, which gives the biggest platform to most the controversial or charismatic. I believe though that in many ways, it also a result of how successful individual politicians have been at cultivating their own legacies.

Even (and perhaps especially) controversial and divisive figures can enjoy strong political legacies. Both Thatcher and Reagan are emblematic of this. Those on the right may hold them up as the political ideal of what should be aspired to and those on the left may denounce them as the ultimate anthesis of their values, but almost none would deny their cultural or historical significance. Few could make the case that either figure did not succeed in their goal of reshaping the domestic and global order of society, even if they disagree on whether this was for better or worse.

By contrast, political figures who were less significant in real terms struggle to generate any such recognition. One could argue this is a symptom of our highly dramatized politics, which gives the biggest platform to most the controversial or charismatic. I believe though that in many ways, it also a result of how successful individual politicians have been at cultivating their own legacies.

Beyond just transformative change during their time in office, this can also be achieved through the work they do out of office. This is not just a matter of what they do, though both Thatcher and Reagan did much to consolidate their reputations among their bases by presenting themselves as figureheads of the conservative right. It is also about what they choose not to do.

In Britain, there is an unwritten rule that former Prime Ministers do not criticise the incumbent. John Major, whose legacy was at best forgettable before, further condemned himself among conservatives through his criticism of the government’s Brexit policy.

In a similar fashion, Tony Blair’s legacy, tainted as it was already by the Iraq war, has further been degraded through his consistent attacks on former Labour leader Jeremy Corbyn in the eyes of many in the party. Blair is a particularly good example of how electoral success does not always necessary translate to a positive legacy.

Now, as the Trump Presidency comes to its (rather bitter) conclusion, the issue of legacy comes to the forefront again. Trump’s refusal to concede the election until the eleventh hour may have proved to further energize his more militant base, potentially teeing him up for a run in 2024

Now, as the Trump Presidency comes to its (rather bitter) conclusion, the issue of legacy comes to the forefront again. Trump’s refusal to concede the election until the eleventh hour may have proved to further energize his more militant base, potentially teeing him up for a run in 2024. However, that was before the incitement of a violent march on the Capitol. Not only has this stained his legacy further, giving him the unenviable achievement of being the first President ever impeached twice, it also massively discredits his own narrative as a law and order patriot, essential for appealing to more moderate Republicans.

Perhaps before Trump might have proved the exception to the usual rules of the politics of legacy, showing that breaking the rules and dispelling with decency could prove more of an electoral help than a hinderance. President Kennedy once remarked that those who tried to ‘ride the tiger’ often ended up inside of it. Fittingly, in the wake of this breach of American democracy, Trump’s own legacy has been chewed up and spat out. He has now consigned his narrative definitively to the fringe.

The future President Biden should be mindful of this. In his battle to restore the ‘soul’ of America, he must also work to construct a legacy that Americans can view as ‘successful’ if not universally ‘favourable’. It he can’t, then at the very least, his job will be to pave the way for someone who can.