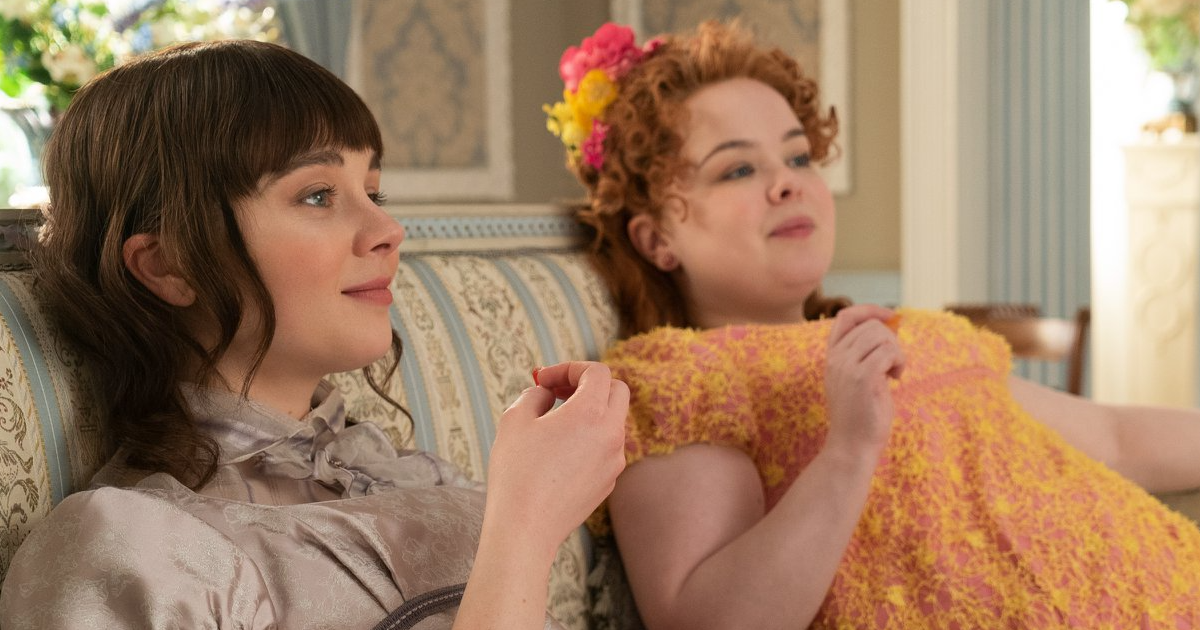 Bingeton- How we consume in the age of Netflix

Image description: The characters Eloise and Penelope from Bridgerton relaxing together.

Netflix has become a huge part of our lives, especially over the last year or so. The $196 billion dollar business has found itself in the homes of more than 160 million subscribers across the globe, promoting what many of us know to be called ‘binge-watching’ – the act of watching multiple episodes of a series in rapid succession in one sitting. Indeed, binge-watching has become a natural aspect of our entertainment habits, reflecting our desires to devour our favourite shows in little time.

Personally, I’ve found myself staring at my laptop screen with plenty of Netflix shows at my fingertips. In the past year, I’ve binged watched the likes of Tiger King, The Crown, Sex Education and You, to counteract the boredom of life in lockdown. In fact, many of us, especially during this pandemic, have achieved a sense of escapism from watching these series, or at the very least such shows have been a convenient distraction now and again in the midst of uncertain times. And who can blame us? We’re living in an era where screen time has become the norm, and the lack of in-person social activities has left us with fewer options in the day.

Moving away from the previous age of entertainment in which viewers would wait each week for the next instalment of their favourite shows, we’ve now hit the era of the binge-watcher, in which platforms offer everything in one go. Their very set-up caters to addictive behaviour, and their creators know it. Indeed, in the early 2010s, Netflix even used the terms ‘binge-watching’ and ‘binge racer’ as part of their marketing campaigns, encouraging their users to seek immediate gratification from all of the shows and films at their disposal.

Our binge-watching habits may have somewhat evolved from when we were able to record shows on TV and watch them back all in one go if we wanted to. But streaming services like Netflix have taken this to the next level, giving users an abundance of shows, and films, that anyone can tap into at any time of the day if they so wish. It becomes a lot more tempting to sink your teeth into a good show and to watch it all the way through in one go at a time in which we have plenty of time at home.

Netflix itself facilitates this and adapts itself to these habits, with the provision of multiple episodes, the fast-forward function and autoplay which automatically starts the next episode once you’ve finished watching the previous one. Once you’ve completed one series, a special algorithm ensures that a new set of shows pops up on your homepage or even the ‘Watch It Again’ section encourages you to revisit some favourites. The ads that keep rolling every time you open up the platform add to the hype of certain shows to watch and provide ease and comfort in the watching process. All of these functions serve to reduce the time and effort of finding something to watch and they create a cycle of instant gratification which further cements the binge-watching culture that we know all too well.

Netflix even used the terms ‘binge-watching’ and ‘binge racer’ as part of their marketing campaigns, encouraging their users to seek immediate gratification from all of the shows and films at their disposal.

In terms of shows themselves, there are a few patterns found in Netflix originals, fiction and non-fiction. The storylines are structured almost like novels, each episode very much relying on the previous one for the whole thing to make sense. While some series on television have had episodes that work as standalone in their own right, Netflix shows tend to rely on a tighter connection between each of them, introducing more drawn-out plots and a big cliff-hanger at the end of each one to keep people hooked and impatient for the next episode. When you have the opportunity to find out what happens next, would you not take it? Even if the plots themselves are overall sub-par (yes, I’m referring to Emily in Paris…no hate, please), the seemingly complex or intriguing characters and their arcs, attractive settings, or final cliff-hangers are enough to keep you determined to keep watching and finish the series in no time.

These addictive shows, while interesting at the time, have often become forgettable for me, especially when I’m in the middle of wolfing down a string of other similarly structured shows. With every new show, a lot of data can be taken from users, like what shows they watch and how, the number of hours one user takes to watch the entirety of a series, etc. It’s a good indicator of what kinds of shows work and what new content should be made, to make the binge-watching train even easier to get on and more difficult to get off. Netflix both caters to its consumers’ new habits and equally fuels them. Binge-watching is essential for its existence and persistence in this new era of entertainment.

So with all of this in mind, is binge-watching an inherently bad thing for the way in which we now appreciate and engage with entertainment? The jury is out on that one. In my personal use of Netflix, I’ve felt a little concerned now and again about my binge-watching habits, especially when it has disrupted my sleep cycle and productivity. But at the same time, I’m okay with indulging in some shows now and again, even if it means forgetting about them soon after. At a time in which my social activities are limited, to say the least. and the worries of our uncertain times hit me hard, platforms like Netflix offer me some kind of escape from the realities of the world. Storylines of series don’t have to be the most intricate, but as long as they keep me somewhat entertained with cliff-hangers and interesting characters, and they act as a nice way to wind down after work now and again, I’m okay with it.

Netflix both caters to its consumers’ new habits and equally fuels them. Binge-watching is essential for its existence and persistence in this new era of entertainment.

We can’t escape the fact that binge-watching has become engrained in our society and my personal watching habits have changed because of it. But it doesn’t mean that this culture has necessarily corrupted or negatively impacted the quality of TV shows out there or how we engage with them. Especially if our binge-watching is done in moderation and with a greater awareness of how this culture works, I don’t think this has to “ruin” our overall interaction with entertainment.