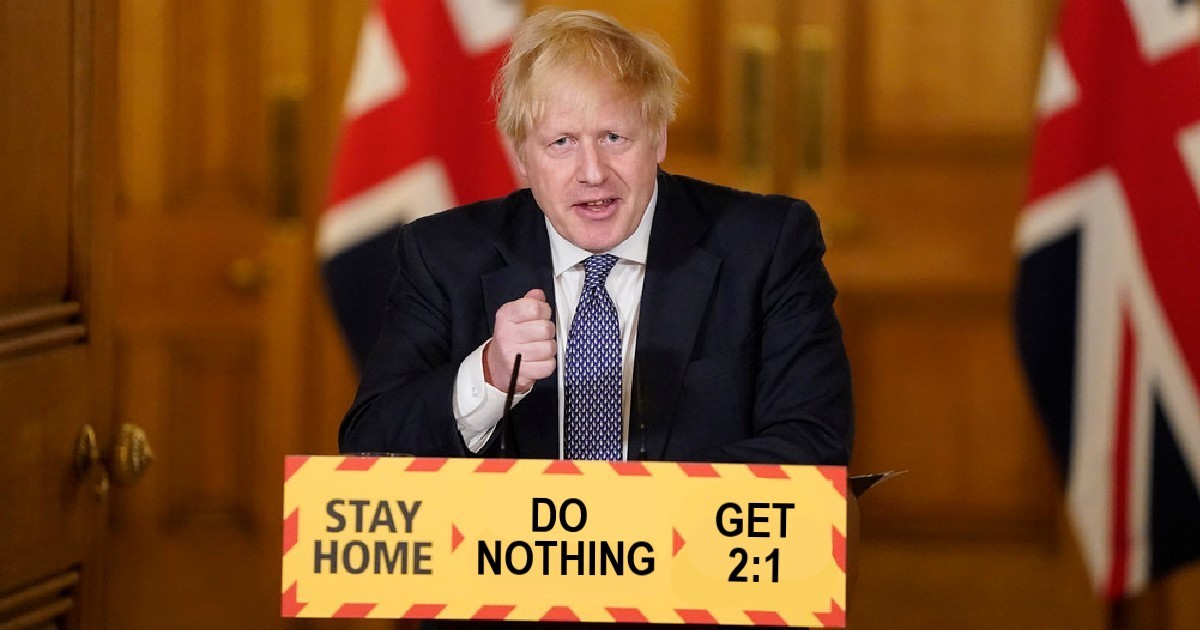 Image Description: A picture of Prime Minister Boris Johnson giving a press conference with the slogan ‘Stay Home, Do Nothing, Get 2:1’.

The Oxford Student news team has recently conducted an investigation this term in which they found out that there is literally nothing wrong at the moment, and that it is literally impossible for people to find anything to complain about.

It all started with the part of student life which no-one has ever struggled with, ever: the workload. Students have found that actually, collections are the best way to relax. From Freshers who were amazed at how transparent and well-managed the entire process can be, to Finalists who ask their tutors for as many collections as possible, having received every collection they have ever done back promptly, and with only positive feedback and well fleshed out commentary.

The positivity about this Hilary Term is only reinforced by the ability to study at home. There are reports that students are finding that problem sheets and essays are practically finishing themselves. Where previously a question may have seemed impossible to answer, and caused confusion for hours on end, now the lovely sound of family (who are never allowed to leave the confines of the house) prevent you from concentrating on how little you know.

There has been no controversy, or even any news at all, from the Oxford Union. This made people smile that little bit extra.

The government, central universities, and colleges have also teamed together to do their part. They have made sure to present a unified front, with clear communication, and any alterations to the rules declared far in advance. An anonymous JCR representative called this “the best time of my life” and went on to explain that they had had zero questions on what college policies were, especially on who was and was not allowed to return to college accommodation. In turn, colleges released a joint statement saying they had “no problems with any students”, and that they “the administration are definitely not massively overworked at the moment”.

The general positivity of the student body can be especially seen on the celebrated anonymous confession pages. Confessions on Oxfess said “I have zero political issues with anyone else at this university” and “Who can I talk to about how much I enjoy life?”. To clarify, these comments came from the better Oxfess, not the worse one.

In other news, the matching algorithms of two matching services, OxPair and VacPair, unanimously decided that each service was the other’s match. Those in charge of the respective services had actually never heard of each other, and said that if they had, they would have immediately ceased operations out of a desire not to crowd the market.

The Vice-Chancellor has been especially relaxed, after many months of no complaints from students. When asked for comment she said that the only joint letters she has received recently have been from students wishing her well, and congratulating her on her leadership so far.

All in all, it looks like this term will shape up to be easiest and most enjoyable term possible. I am sure the reader will join me in thanking the universe for granting us this unique experience we have, living through these unusual(ly pleasant) times.