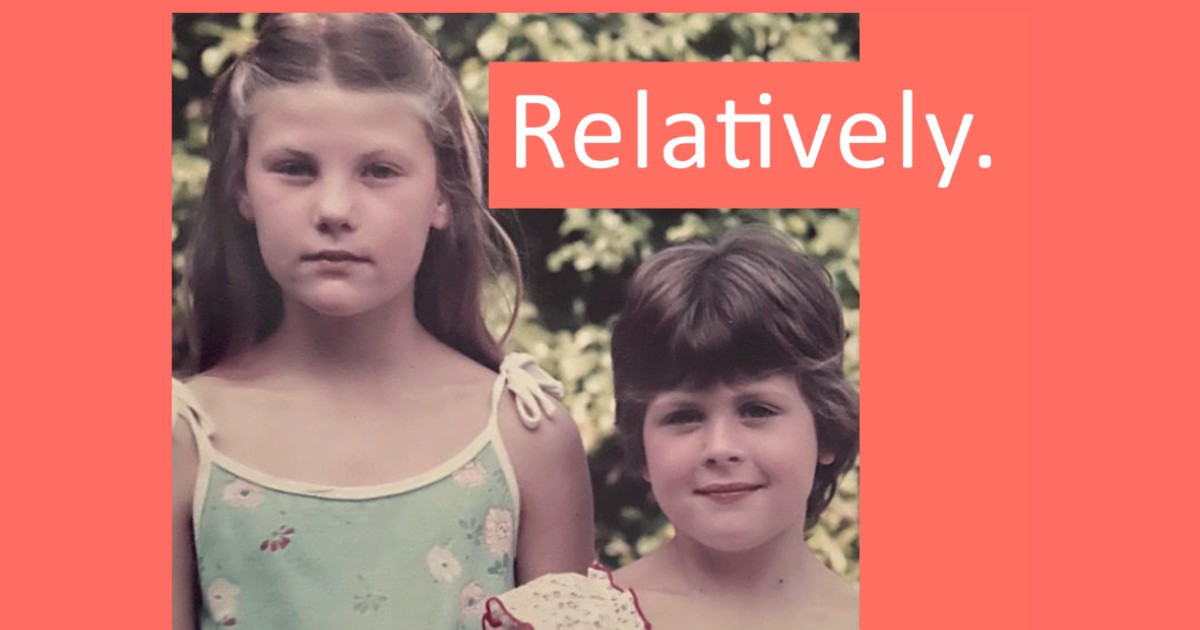 Image Description: poster for the podcast, reading “Relatively”, with siblings standing beside each other

With two younger sisters, both with strong personalities, my life has been defined by sibling relationships. But it is not something I have ever given much thought. We spend hours agonising over our romantic relationships, and we are often very conscious of the way that our parents shape us. Friendships take such conscious effort to create and maintain that we’re constantly aware of them. But with our sisters and brothers, we can often take those relationships for granted, or wish them away when they’ve stolen our clothes or our food for the fifteenth time that week.

Catherine Carr’s new Podcast, Relatively, is about challenging that. In each episode, she speaks to a sibling pair about their childhoods, and the relationship they’ve grown to have with one another in adulthood. No two episodes are the same. In one episode Dan Snow (the historian often found making documentaries on old ships) and his filmmaker sister, Rebecca discuss coming from such a successful, and at times eccentric, family. Rebecca admits that being in Canada, so far from her brothers, is the greatest sadness of her life. She also laughs at length about teasing him. In another, Davino de Campo (of drag race fame) discusses homophobic bullying at school, and the effect it had on her sister. She recognises there’s nothing they could have done. But it is heart-breaking nonetheless. It’s perhaps worth having a box of tissues with you when you sit down to listen.

It is almost like listening to another person’s therapy session. You can hear the effort and impact of the discussions unfolding throughout the podcast.

Some of the biggest insights come from her interviews of them separately. When apart they mention things they don’t say with their sibling also there. Sometimes they don’t want to hurt their sibling. Other times it feels like a priest’s confession box: the guests whisper secrets to… a microphone. Grief is a key theme. Lost parents are discussed, and in the episode with the singer and actor Johnny Flynn, he is remarkably honest about the loss of his father as a teenager, and growing older than his father had ever been. Despite working and living together, his sister Lillie seems startled by some of his comments and speaks about her memories in a very different way.

It’s the interventions and guidance of Catherine Carr, part interviewer, part host, that really make the podcast. She pushes her guests to see what they might have become blind to, and she doesn’t shy away from discussing difficult topics, even whilst staying sensitive and kind. She never pushes too far, because she doesn’t need to. It is almost like listening to another person’s therapy session. You can hear the effort and impact of the discussions unfolding throughout the podcast. In the first episode, the MP Jess Phillips talks about her brother and his previous drug addiction. It is a forty-minute long emotional rollercoaster, from her confession that she was jealous of the attention it gave him, to her awareness that she could have been more helpful in his recovery process.

The wonder of the podcast is that the same thing could be done with any person, and a remarkable story would no doubt emerge.

Whilst the theme remains the same for every episode, you never know what you’re going to get. It doesn’t matter if you know who the people being interviewed are. The chances are each week only one of them will be ‘notable’ for their fame. The wonder of the podcast is that the same thing could be done with any person, and a remarkable story would no doubt emerge. You cannot listen without examining your own familial relationships. But you will also leave every episode with a sense of calm: it provides a deep catharsis, and it is affirming of our ability as humans to connect with one another.

As the podcast reminds us, sibling relationships can be the longest in our lives. They can also be the most impactful, and the most hurtful, or wonderful. These interviews lay bare the complexities of these relationships and their constant evolution. The podcast also features the song ‘Good Tradition’ by Tanita Tikaram, which I have now become mildly obsessed with (Ancient Heart is a truly brilliant, if rather bizarre album – check it out). Sibling relationships really are “a good tradition of love and hate”.