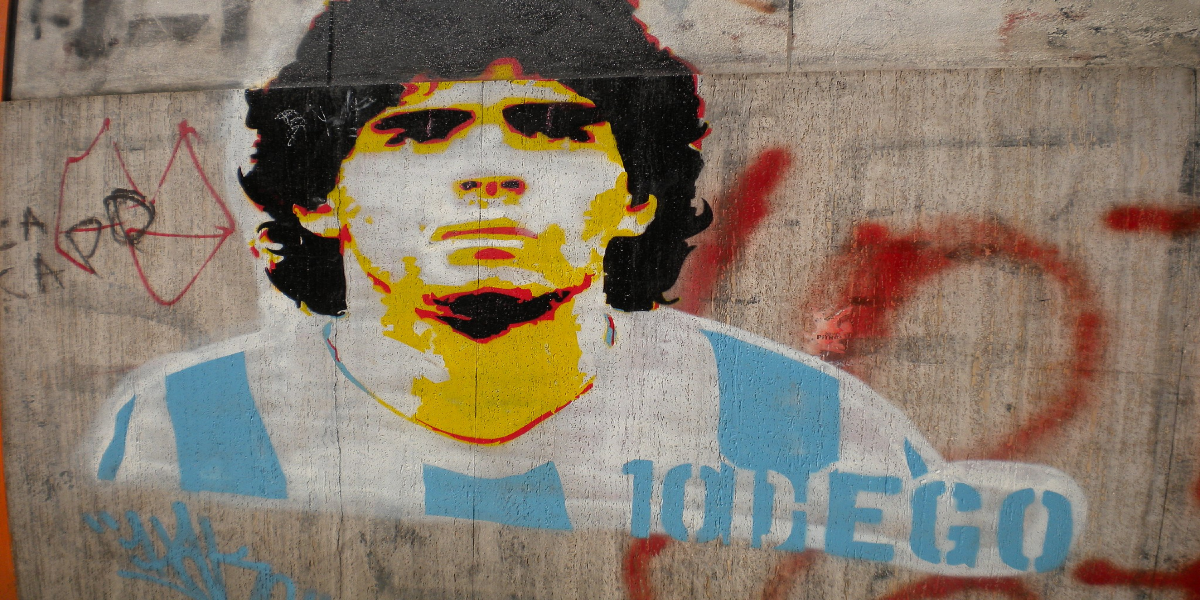 22nd June, 1986, Mexico City. Football World Cup, quarter-final game. Argentina and England face off only four years after the Falklands War – the rivalry is intense. In the 51st minute, a ball is played towards the English goal, and contesting it is an Argentine player and the English goalkeeper. They jump for the ball and the Argentine appears to outjump Peter Shilton, who dwarfed the South American by eight inches and who of course could use his hands as the goalkeeper, to score the opening goal. It seems unbelievable that he could manage that without his hands, but the referee and his assistant find nothing wrong; the goal stands. After the game, the scorer would remark that it was “a little with his head, and a little with the hand of God”. This would later be known as the “Hand of God” goal. Only four minutes later it is the same Argentine number 10 in the spotlight, getting past four defenders and the goalkeeper in a 60-yard dribble, before slotting the ball in the net. This goal would later be voted “Goal of the Century”. Argentina took the game 2-1 and later went on the win the whole tournament. The man at the centre of this game was, of course, one Diego Maradona, and the two goals he scored that game are not only some of the most famous in the history of football, but also the perfect symbols of the two faces of Diego Maradona: the brilliance and the scandals.

Diego Armando Maradona was born on 30th October 1960 and grew up in modest circumstances on the outskirts of Buenos Aires, Argentina. He was a true prodigy, making his professional debut in the Argentine Premier Division shortly before his 16th birthday, and scoring his first goal a month later. His first senior cap for Argentina came at the age of 16, and despite being left out of the squad for the 1978 World Cup due to his age, he would dazzle the world a year later by leading Argentina to win the 1979 FIFA World Youth Championship, scoring six goals in six games at the tournament. He was frustrated by missing out on Argentina’s World Cup triumph in 1978 (no doubt, ability-wise he should have had a place in the squad), but his time would come eight years later, as he guided Argentina to conquer the footballing world once again at the 1986 World Cup.

By this point, he had become a household name in Europe as well – he had spells at Barcelona and Napoli, with both teams spending what were then world record fees for his services. It was in Naples where he would become a club legend, winning two league titles along with a Coppa Italia and a UEFA Cup triumph. Napoli would later retire the number 10 jersey in his honour. Maradona is widely regarded as one of the greatest of all time, an exceptional dribbler, the stuff of nightmares for defenders. The ball would stick to his feet, and he combined his short stature and low centre of gravity with quick feet and explosive speed to slice his way through the defence of any team that came his way.

As with so many greats in the sporting world, with the years came the scandals for Diego Maradona. His time at Barcelona was marred by injury and incidents on the field, notably involvement in a mass brawl in the 1984 Copa del Rey final. While successful on the field in Naples, behind the scenes emerged a number of personal problems: issues of discipline, cocaine use, alleged ties to the Mafia, and a supposed illegitimate son. He left Napoli in 1992, having served a 15 month ban for a failed drug test. His international career came to a similarly disgraceful end, being sent home in the middle of the 1994 world cup after failing yet another drug test. Post-retirement, the scandals continued, among which were drastic weight-gain, alcohol abuse, further drug problems, and issues with the press. His managerial career came nowhere close to his playing career, with a number of short stints with less notable teams, as well as an underwhelming two years as the head coach of the Argentinian National Team.

Maradona’s was truly a tumultuous and turbulent life, with incredible highs and crashing lows, but the one thing that never changed was the adoration of the fans – they never stopped loving him. Ask any football fan what it was like to watch him live and they will tell you that it was an experience like no other. The joy, the wonderment he caused for so many in Argentina and around the world could never be erased; none of his later problems in life – the drugs, the alcoholism, the failed managerial career – could make fans forget about the magic of Maradona when he was on that field. His performance against England that day in 1986 encapsulated all that defined him not just as a footballer, but as a human: first a goal he cheated to score, but then the greatest goal of the 20th century. Diego Maradona was an incredible player with such talent and charisma that he could get away even with the most famous example of cheating in modern football, precisely because of what he produced on the field in every other instant.

It is a true shame that for many in our generation, the memory of Diego Maradona will be that of the overweight, crazy former football star. No doubt, for those who saw him play on that field, where all the outside problems disappear, he will remain the Maradona of the 80s, the young man from Villa Fiorito who had the footballing world at his feet.