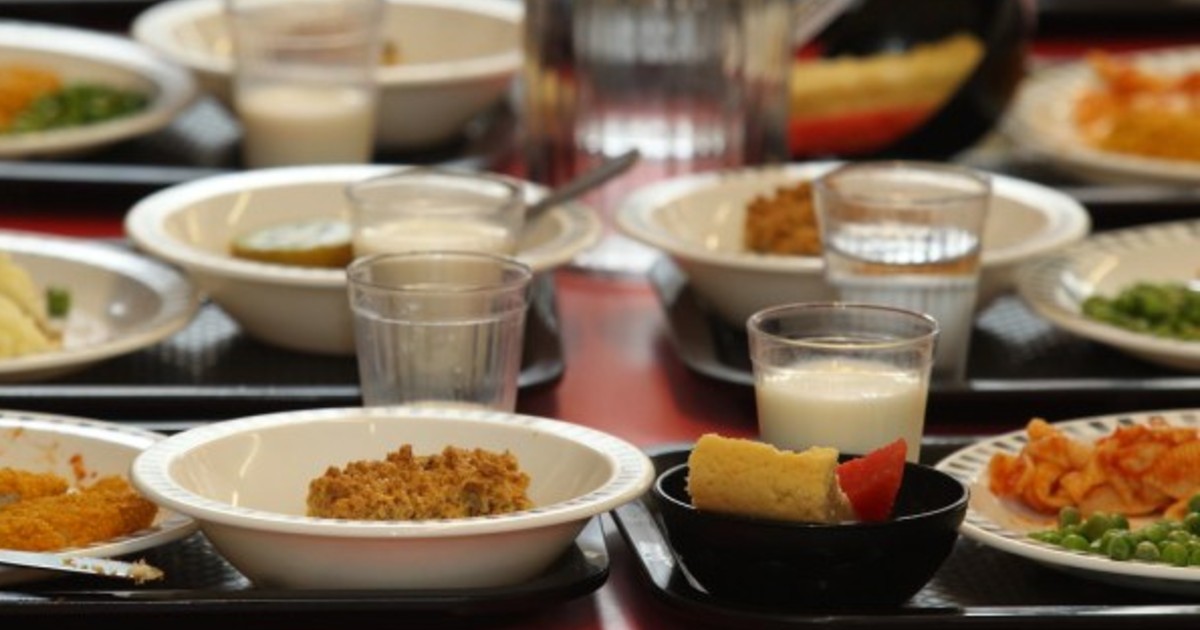 Image description: A table filled with trays of plates of food, cups and a water jug

Boris Johnson’s latest venture in school meals policy, one with all the compassion you’d expect from a man known for tackling children to the ground, is the hasty extension of the government’s national voucher scheme. The scheme provides £15 worth of supermarket vouchers to parents (who according to gov.uk, in order to qualify, should have a pre-benefits household income of less than £7,400) to feed their child for a week. The change comes after a severe shortage of food provided was shown on Twitter by users like ‘RoadsideMum’, who shared an image of her child’s lunch for a week: “2 days jacket potato with beans, 8 single cheese sandwiches, 2 days carrots, 3 days apples, 2 days soreen, 3 days frubes, Spare pasta & tomato”. The Prime Minister who was quick to describe the problem as “an insult to the families”, did not acknowledge that the meals provided were only short of government guidance by a few items. The wider picture is even more worrying; out of the 4.2 million children the government estimates to live in poverty, only 1.4 million children even qualify for free school meals. With child poverty rates estimated to reach 5.2 million by 2022, the lack of provision of school meals are both confusing and alarming.

Lack of investment in schools overall is one possible explanation. When the government in 2013 embarked upon a policy of providing free school meals for children in reception, year 1 and year 2, it was found that more than 2,700 primary schools in England would need improvements in order to make the scheme effective these ranged from additional dishwashers to entire kitchen and dining hall refurbishments. Headteachers also complained of insufficient funding to hire the extra staff needed to carry out this policy and suggested that lunchtimes would have to be extended in order to accommodate every child. Here the government exposed the problem of underfunding schools: the task of food provision was wound up with issues of insufficient facilities. In 2016, as reported by The Independent, the grants provided to 2,867 smaller schools, in order to help them provide these meals, were reduced from £3,000 to £2,300. This coincided with government budget cuts which left 84.6% of ASCL members (Association of School and College Leaders) saying they “had not received enough funding in the past 12 months to meet essential needs of their institution”.

As education funding is increasingly cut so are pupil’s necessities; a pattern that continues to haunt poor children. In 2019, the ASCL reported headteacher warnings of a £5.7 billion shortfall in per-pupil funding for 2019-20. For children in poverty, already suffering from a persistent attainment gap between the poorest primary school children and their classmates – a gap which in 2019 started to widen again for the first time since 2007, provision of food is absolutely necessary. The pandemic has already meant a severe reduction in educational standards for state-educated pupils, these children should not have to face additional problems such as hunger, fatigue and trouble concentrating due to lack of food provisions.

84.6% of ASCL members (Association of School and College Leaders) said they “had not received enough funding in the past 12 months to meet essential needs of their institution”.

Marcus Rashford’s powerful campaign, consistently holding the government to account throughout this fiasco, has unearthed another issue: complacency around child poverty and malnutrition. According to the Child Poverty Action Group, 30% of children, 9 in a class of 30, were in poverty last year. The Social Market Foundation also points out that the UK government only started tracking food insecurity in 2019, showing it will take until 2022 to have sufficient data covering the period of the pandemic. Not only this, but the government’s ‘National Food Strategy’ marks the first review of UK food policy in 75 years. Its recommendations: more children should be eligible for free school meals, the Holiday Activity and Food Program should be extended and the value of Healthy Start vouchers should be increased.

Horrific statistics from the pandemic: “16% of parents said that their children made do with smaller portions, had to skip meals or went a day without eating between March and September” should not have been the cause for this increased attention. Many charities have long been trying to draw attention to this problem before the full effect of the pandemic had hit; the Trussell Trust had already distributed 1.9 million emergency three-day food supplies between April 2019 and March 2020, an increase from 1.4 million in 2017-2018, and from 1.1 million in 2015-2016. Yet, food instability continues to be a problem which has not received the attention that its growth demands, and with a 121% increase in demand from children for food bank services, we can be sure that the school free meal system as it stands is indifferent to the potential for malnourishment and deprivation that many children may face, simply because they do not fit the eligibility criteria.

“16% of parents said that their children made do with smaller portions, had to skip meals or went a day without eating between March and September”

We should be careful, however. In the short term, there may be a reasonable argument against the provision of food to all registered pupils on school premises; if we are to be equitable in the face of an extreme divide in standards, there is an argument that any extra funding should go directly towards the students in the harshest poverty. This said, in the long term it is hard to imagine an ideal educational system which does not protect its children, particularly against the perils of hunger and fatigue. What is more, these meals must be up to a standard that parents can feel comfortable about, when statistics show a 3% increase in the use of food banks during the pandemic, versus a 2% decrease in the use of school meals, we are made painfully aware of the desperation many children face because of the failure to provide decent school meals.