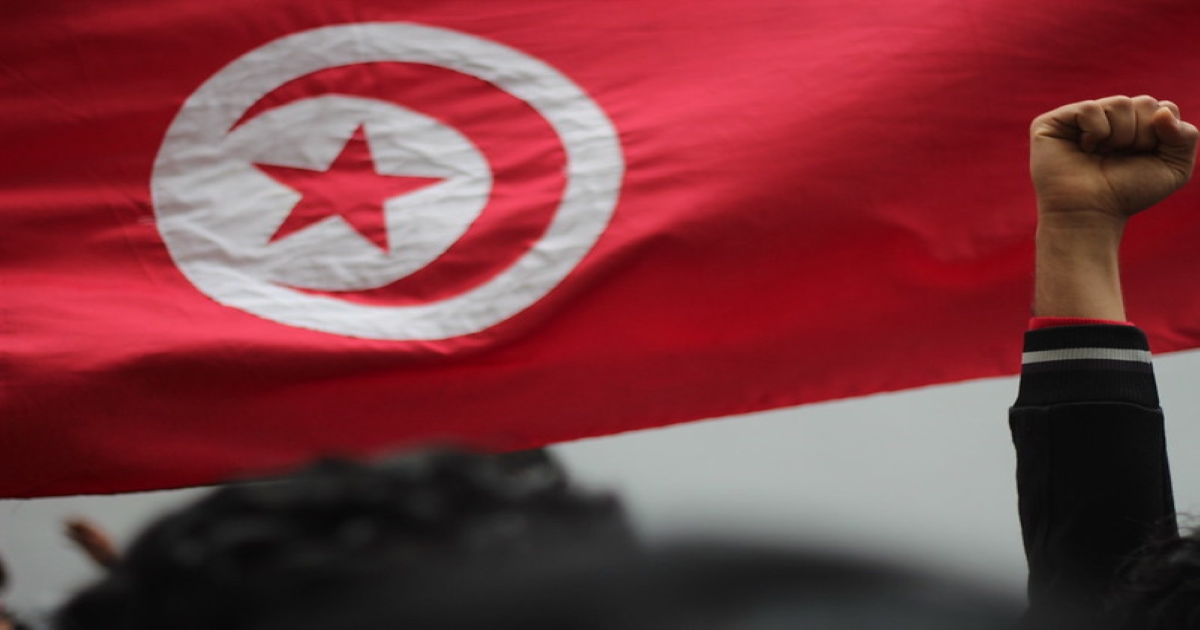 Tunisia 10 years on: the anniversary of the Arab Spring

Image description: A fist in front of the Tunisian flag.

As the birthplace of the Arab Spring, Tunisia is cited as evidence that democracy, the rule of law and peaceful political participation can be established, and even flourish, in the Arabic-speaking world. There remains, however, still a great deal to be achieved.

The pro-democracy protests that sparked uprisings across the region triggered a number of outcomes elsewhere: further repression, the rise of Islamism, and civil war.

Ten years on, therefore, some may be tempted to treat Tunisia as a success by virtue of the fact that it had a somewhat better outcome than was the case in other MENA countries. Tunisia has indeed avoided the kind of conflict witnessed in Syria and Iraq, in Libya and Yemen, following their own uprisings. But to say “at least there has been no civil war” is hardly the same thing as to say the aims of the revolution have been met. The country could be so much more than a success by the standards of the Arabic-speaking World. It could be a success full-stop.

The ten year anniversary then is a time to reflect. But not to look backwards, or to remain stuck in the past. The anniversary is an opportunity to take stock, both of successes. And of just how much more remains to be resolved.

In the most recent Arab Barometer (Wave V, 2018), the result for Tunisia indicated that 58.1% of respondents had “no trust at all” in the government, whereas a mere 4.5% have “a great deal of trust” in them. Confidence in elections is slightly better, but far from resounding: 30.9% of respondents in Tunisia considered elections not to be free or fair, the answer with the highest proportion of responses, with 24.1% considering them “free and fair but with major problems”. While it is encouraging that parties can now freely participate in the democratic process, the lack of confidence in the political process is cause for serious concern.

Successful regime change does not depend on removing an autocrat alone: as we have seen, particularly in Iraq, Libya and Egypt. For regime change to really succeed, the new system must aim to earn the confidence of the electorate. Trust in the law, the rule of law and government institutions are essential.

Successful regime change does not depend on removing an autocrat alone.

Tunisia has undoubtedly achieved some remarkable things, among them the dissolution of the secret police and the peaceful transition of power after presidential and parliamentary elections. Tunisia’s transition plan was a collective process, involving representatives across society and the political spectrum, overseen by the Higher Authority for Realization of the Goals of the Revolution, Political Reform and Democratic Transition. These are exceptional achievements in a region where democracy does not flourish and abound, in a country which, before the revolution, was in effect a one-party state. Before regime change, in Tunisia’s Chamber of Deputies, only 20% of seats were reserved for the opposition.

Painful economic reforms are unpopular but necessary, such as the need to cut the public sector wage bill. In response to the demands of revolutionaries, Tunisia’s interim governments took measures that further contributed to the economic malaise, hiring thousands of new civil servants. Public-sector pay as a proportion of GDP rose to amongst the world’s highest. It will be even more difficult to bring much-needed reform to the public-sector, and rebalance towards the private, in post-pandemic times.

The Tunisian economy, in particular, tourism, has suffered greatly from the fallout of terrorist attacks. The impact on the sector, the country’s second-largest after agriculture, has further increased an existing unemployment problem. This then becomes a vicious cycle: Tunisians, finding themselves unemployed, seemingly without prospects and, consequently, disaffected, become targets for the vile propaganda and recruitment campaigns of Islamic State. IS takes advantage of the dire economic situation, claiming that democracy and capitalism aren’t working. They present themselves as the only real alternative. Thankfully, the need to tackle Islamist terrorism in Tunisia is well known and being addressed: the Tunisian Armed Forces have had successes against al-Qaeda and IS affiliates in the western mountains. However, it remains a constant uphill struggle for the country’s authorities.

Both the security and economic situations in Tunisia are extremely concerning. It is important to understand that the two are inseparably linked. There remains the danger of yet another a vicious cycle: attacks may negatively impact travellers’ confidence, then the tourism sector, then the economy, which may cause yet more job losses. The result of yet more unemployed and disaffected youths may then be that the Islamist terrorists make further inroads in recruitment. The danger then is of a cycle of instability.

Before the pandemic, however, there was cause for some optimism, as the tourism sector showed signs of recovery, with a 13.6% increase in tourist numbers in 2019 compared with the previous year. The situation has since worsened: with the global pandemic, the contribution of tourism to GDP fell by more than 2 percentage points in 2020. This reflects a global trend: 2020 saw a fall in 700 million tourist arrivals globally, amounting to a $730 billion loss for the world tourism sector. All this then presents particular challenges not only for Tunisia but elsewhere in the MENA region and beyond, for those countries which both rely heavily on the tourism sector and which tackle their own terrorist affiliates.

There remains the very real risk that the ongoing economic malaise could ultimately undo many of the gains of the revolution. The international community must be willing to offer Tunisia the necessary support to ensure that there can be no future return to authoritarianism. Positive steps have been taken, but there is a long way to go to ensure that future generations enjoy lasting freedoms: of association and of speech, to protest peacefully, and to criticise politicians. All things which are still so new and so must be so carefully preserved in Tunisia. Things which we in the West take for granted as a given.

“Freedom is a fragile thing and it’s never more than one generation away from extinction. It is not ours by way of inheritance; it must be fought for and defended constantly by each generation, for it comes only once to a people. And those in world history who have known freedom and then lost it have never known it again.”

So said Ronald Reagan. Tunisians have not even enjoyed a generation of freedom. In Tunisia’s case, nothing must be taken for granted. It is by no means a given that this young democracy will survive, let alone ultimately flourish.

Here’s to the twentieth anniversary. To the hard work that can and should be done along the way. Whatever difficulties may be faced going forward, Tunisians, with the support of the international community, can work together and aspire to make the next milestone even more meaningful. Success must not be taken for granted. But it is well worth fighting for.