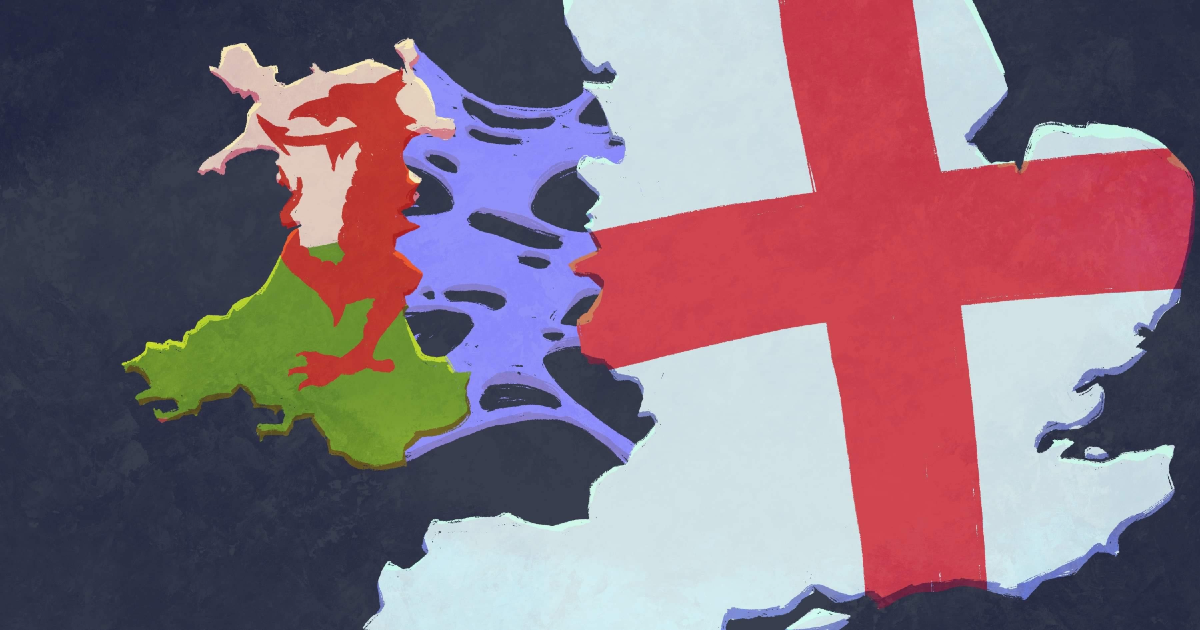 Image Description: a map of England and Wales, with their respective flags. Wales is separating from England.

As a Welsh person currently stranded in England, I have grown a deep appreciation for my homeland and the way the Welsh government has approached the coronavirus pandemic. I miss mountains – how is England so relentlessly horizontal? I miss the lilt of Welsh accents that always put me at ease. I miss my friends teasing me for my lack of a Welsh accent (jury’s out on how l managed that).

Wales has been far stricter than England with lockdown and social distancing rules. There have admittedly been clear faults with Wales’ approach, such as not mandating the wearing of masks in supermarkets for shoppers until September and lifting the firebreak lockdown too quickly. As I write, South Wales, where my family live, is currently in the grips of a massive outbreak; it is estimated that 1 in 60 people in Wales currently have Covid-19. The cases are largely in the more densely populated South, which also contains some of Wales’ poorest regions.*

However, the general approach has been more measured and has placed greater emphasis on saving lives rather than the economy. Despite how proud I am of my government’s handling of the pandemic, as well as other things like maintenance grants and the absence of prescription fees we enjoy in Wales, the dramatic rise in support for Welsh independence troubles me greatly.

What I truly want is what is best for Wales. Independence is not that – not yet. I hope that one day we may have the economic power to be independent. But, currently, we are nowhere near that point. Independence has an appeal but we are not ready, and calls for independence are misdirecting attention from what we need to be focusing on. We need to support greater investment in projects that will build upon our strengths, such as renewable energy production, and allow us to leave our reliance on English taxes far in the past.

Polling shows that support for Welsh independence is currently at almost a third, a massive leap from the three percent recorded in 2014. YesCymru, a group calling for Welsh independence, has seen an astonishing exponential increase in their membership, amassing 13,000 new members since the start of 2020. Not bad considering that they had fewer than 2,000 members last January, a milestone which took them six years to reach.

On one level I understand why the call for independence has become so vocal this year. We have endured 700 years of English rule and the handling of the coronavirus pandemic in 2020 has been the straw that broke the camel’s back. Being able to look across the border to England has given Wales a sense of pride that has been missing for years. Our subjugation to English rule since the 14th century left us without faith in our ability to rule for ourselves, along with a deep sense of unfairness over how we have been treated.

What I truly want is what is best for Wales.

Even with my (very) basic knowledge of Welsh history, I can name numerous instances where England and Westminster have treated Wales egregiously. For example, Capel Celyn, one of the last Welsh speaking villages, was destroyed and turned into a reservoir to supply water for Liverpool.

The Aberfan Disaster especially sticks out to me as another poignant example. 116 children and 28 adults lost their lives following negligence in the maintenance of a coal tip from the National Coal Board (NCB), a nationalised body. Multiple complaints had been made to the NCB about this particularly large slag heap yet they were all ignored. Tragedy ensued. The slag heap collapsed and engulfed a primary school.

Last year, I stood at the memorial site with my dad, both of us silenced by the enormity of the pain that the village has suffered. My dad is a strong, stoic Welsh man and I can count the number of times I’ve seen him cry on one hand – this was one of those times. Standing there with tears rolling down both our faces, it hit me in a way it never had before, the damage that has been inflicted on Wales by English rule both directly and through abject dereliction of duty.

My dad told me the story of a patient he had helped treat who had been in the disaster. He was a young boy who, trying to escape the rubble, had to use a teacher’s dead body as a step to reach a window. The experience haunted him well into adulthood and beyond. And he was one of the lucky ones – he managed to survive when so many of his classmates and teachers did not.

Standing there with tears rolling down both our faces, it hit me in a way it never had before, the damage that has been inflicted on Wales by English rule both directly and through abject dereliction of duty.

The Welsh language (Cymraeg), one of the oldest languages in Europe, was almost killed by English rule –  intentionally.  In the 16th century, the use of Welsh was largely banned and it wasn’t until 1992 that Cymraeg was given equal status to English in all public bodies.

Now, Welsh is a compulsory subject up until GCSE in all state schools in Wales. There are also Welsh-medium schools, where education is delivered in the Welsh language. The teaching of Welsh in English-medium schools is far from perfect; I studied it for 12 years and have the same ability as a Year One student in a Welsh-medium school, and I was somehow one of the more talented students. But it is progress – progress that has happened largely because of the Welsh Assembly’s dedication to the revival of the Welsh language.

The Welsh public were offered a devoted governing body in a 1979 referendum but the proposal was rejected with a 79.9% vote against it. Yet when a second referendum was held in 1997 there was a small majority (50.3%) in favour and the Welsh Assembly was created. English rule took away many things from us: it took lives, it almost took away our language, and for many years it took away our faith in ourselves – apart from in rugby. It makes me incredibly happy and honestly relieved to see that faith in our abilities as a nation is coming back with such force.

I want our day for independence to come; that day is not today, tomorrow or any day in the foreseeable future.

But we cannot get ahead of ourselves. Our deficit is substantial, our infrastructure is lacking, and we need to build stronger industries to power our economy. Our farming was reliant on EU subsidies and although I know many proponents of independence would want to see Wales join the EU, due to the state of our economy and political pressures, in particular from Spain, the EU accepting us as a member is far from given.

Brexit and the events since have definitely played a part in the growth of the Welsh Independence movement. To my chagrin, Wales voted to leave the EU in 2016 with a majority of 52%. Practically, this makes little sense as Wales was a net receiver of EU money. Although Wales voted to leave, Remain had far higher support amongst young people, and it is these young people that are supporting Welsh independence; they envision a Wales that is an independent country and a member of the EU.

Support for Welsh independence is higher with Remain supporters than with Leave supporters for all ages. Brexit has made people consider if they would prefer to be in the UK outside of the EU or in the EU as an independent nation. I would love to see Wales rejoin the EU if it became independent, however this is just not likely.

Wales is a poor country; the average GDP is only 77% of the EU average with some regions of Wales faring even worse. The unemployment rate of Wales from November 2018 to January 2019 was 4.3% and the poverty rate in 2018-19 was 23%. We are a country that is working but not producing much at all and if we’re out of the UK and the EU this could go wrong all too easily. Farming is a massive industry in Wales, an industry accustomed to EU subsidies and demand from the rest of the UK and EU. Yet, if we’re not in these, we will need time to make trade deals, especially with the EU who have no reason to prioritise a nation of 3 million over Australia, Mexico, or India.

For now, I think I’m happy supporting greater legislative and tax raising powers for the Senedd, who have proved that they can handle power this year in a way they never have before. Wales should focus on renewables; we have plenty of potential sites for tidal power which would bring not only jobs but give us an opportunity to become leaders in the technology which we could then export. This obviously requires money that will likely have to come from Westminster. Money from England is necessary for our growth as a country, as much as we may loathe to admit it

I want our day for independence to come; that day is not today, tomorrow or any day in the foreseeable future. If we become independent too soon we risk financial ruin. Patience is a virtue –  we’ve had 700 years of English rule, I’m sure we can endure a few more.