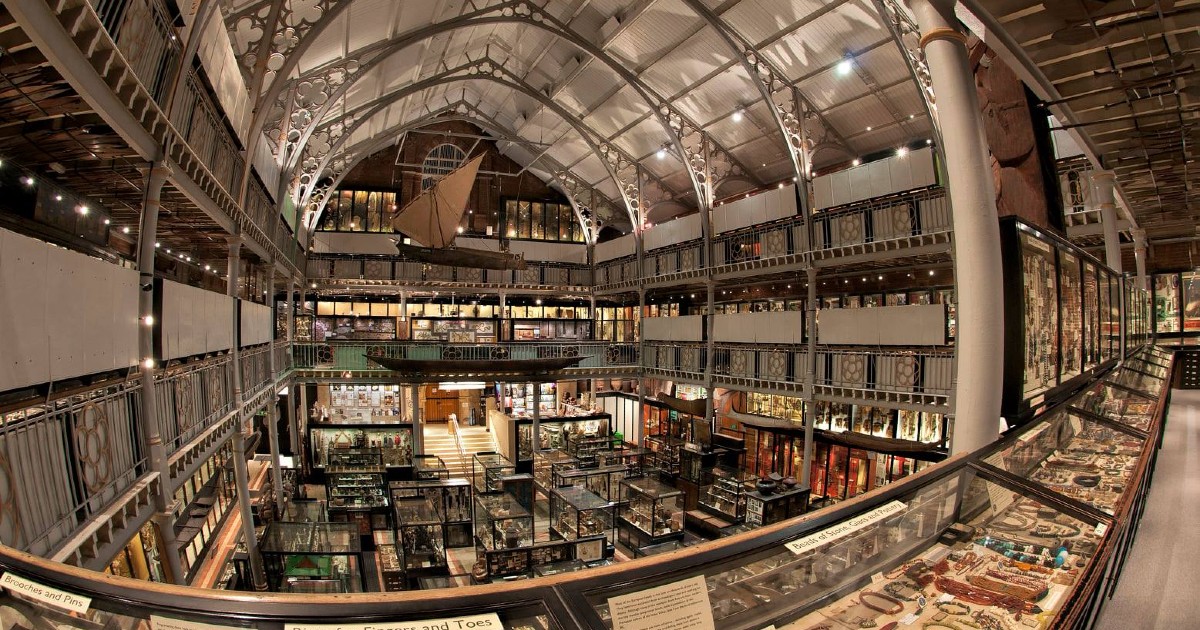 The Pitt Rivers museum: ours to enjoy?

Image Description: View from inside the Pitt Rivers Museum

I confess, in full acceptance that I am playing into the History Student Stereotype, to feeling absolutely at home in a museum. Many times over this year of lockdowns I have found myself craving the familiar comfort of their echoey rooms. Last term especially, weaving out of Museum Road into town, I would often gaze longingly at the Museum of Natural History and remember, hidden deep in its neo-gothic grandeur, the childhood wonder of the Pitt Rivers. I remember distinctly the feeling of fascination, wonder, and a touch of fear when I first encountered the Pitt Rivers’ collection; its dark hall and glowing glass cabinets soon became my favourite part of a day out in Oxford.

But then I grew up. As I moved on from Horrible Histories–level academia, my innocent excitement at the museum’s colourful totem pole, masks, and carved figurines was joined by an uncomfortable sense that I, along with every other visitor gawping at these “exotic” anthropological wonders, was enjoying something that was not mine to enjoy.

The Pitt Rivers was therefore, for eighty years, complicit in misrepresentation that undermined its status as an historic educational facility worthy of the cultures it seeks to represent.

The Pitt Rivers is famous – or infamous – for its possession of tsantsas, known more widely as “shrunken heads”. These skins of human and sloth heads, filled with sand and meticulously reshaped to preserve the facial features, have been exhibited in the museum since the 1940s in the erroneously named “Treatment of Dead Enemies” display. In fact, the tsantsas were not a barbaric war trophy or display of cruelty to defeated enemies but were rather made to capture the power of the soul of deceased clan leaders. The original curation of this display promoted an elaborated colonial legend of the savage, distant head-hunter, and presented “evidence” of this in a neat, freak-show-esque glass box. Irrelevant, and inconsistent with this legend, was the fact that nearly half of the heads in the museum’s collection were not human at all, but had been made from sloth and monkey remains. In those faces that were indeed human, their personal identity was equally irrelevant – all that is known is that they once belonged to the Jivaro or Xebaroe people of Ecuador and Peru. The Pitt Rivers was therefore, for eighty years, complicit in misrepresentation that undermined its status as an historic educational facility worthy of the cultures it seeks to represent. The public removal and addressing of this fault was a vital and correct step towards progress.

we must totally decentralise our narrative, allowing the people from whom these treasures have been looted to take the reins.

But the removal of these heads from public view does not negate their uncomfortable presence in the museum’s possession; they are  still housed in the same building as the rest of the Museum’s colonial-era pick-and-mix, intended since its foundation in 1884 to, at once, entertain its British audience and to universalise the empire’s diversity into one neat physical encyclopedia of artefacts. The museum’s director, Laura van Broekhoven, calls this “epistemicide” – the action of erasing the infinite diversity of thought that can be found in all parts of what used to be the British Empire. Broekhoven calls for the museum to shift its mantra from presenting the anthropological “universe” to an anthropological “pluriverse”, understanding that, no matter how intently British scholars may have studied a foreign culture, they can never hold authority or ownership over the way it is taught and presented. What may be the instinctive response to the post-colonialist dilemma – loudly presenting a mea culpa, hiding particularly problematic exhibits and even, as seen in the Pitt Rivers in the ‘80s, literally whitewashing racist terms on labels with Tipp-Ex – may not be the best way forward. Instead, we must totally decentralise our narrative, allowing the people from whom these treasures have been looted to take the reins.

I, obviously, don’t have a neat conclusion to this article – I don’t know what to propose as the best way forward on a greater scale. Dealing with centuries of colonial subjugation that is so painfully presented in the empty halls of the museums that I so dearly miss will be a long and complicated journey. What we can – and must – do, however, is start small. Visiting museums can no longer be the comfy day out it may have once been; instead, critically engaging with the displays we see and the labels we read can start us on the journey to re-calibrating our perspective. By mentally re-instating the artefacts we see plucked from their cultural context and neatly curated into lamp-lit displays into their historical and geographical origins, we can begin to right a fraction of the wrongs embedded into museum culture.

van Broekhoven, L. (2020, December 2nd). Where is the love? [Video]. Retrieved from https://www.youtube.com/watch?v=dnLwZsIJfQE&feature=emb_logo