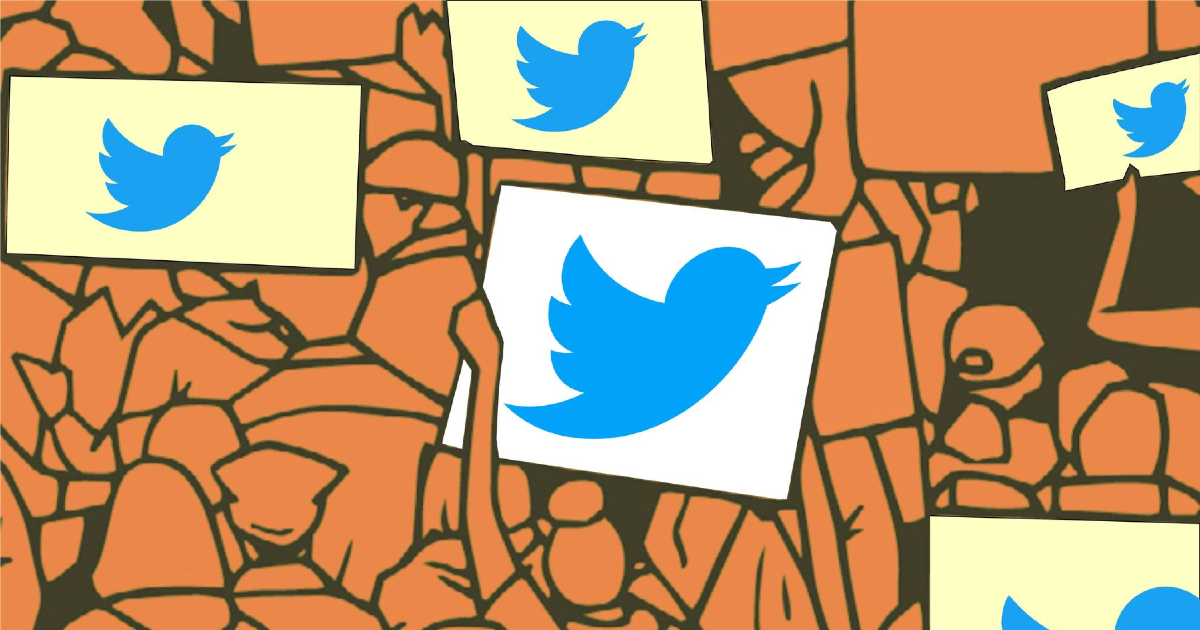 Image description: illustration of protesters holding up signs with the Twitter logo on it

In 2012, a year which saw Donald Trump tweet with his usual insight: “An ‘extremely credible source’ has called my office and told me that @BarackObama’s birth certificate is a fraud.”, the first presidential debate between President Barack Obama and Republican nominee, Mitt Romney, became the most tweeted about event in US political history at the time.

In 2016, a year which saw over 1 billion campaign-related tweets about the US election, Trump continued with his nuanced takes: “In addition to winning the Electoral College in a landslide, I won the popular vote if you deduct the millions of people who voted illegally.”

In 2021, after more than 300,000 election-related tweets from October 27th-November 11th were labelled as “potentially misleading” by Twitter moderation, Trump went out with a bang: “The 75,000,000 great American Patriots who voted for me, AMERICA FIRST, and MAKE AMERICA GREAT AGAIN, will have a GIANT VOICE long into the future. They will not be disrespected or treated unfairly in any way, shape or form!!!”

Whilst for some it might seem like a shame that Trump was banned on Twitter just as he was starting to learn the wonders of capital letters, Twitter’s decision to ban Trump’s account “due to the risk of further incitement of violence”  has remained firm.

Some have argued that this decision matches the years Trump has spent undermining democracy: fuelling a racist conspiracy to question Obama’s right to serve; stirring rumours of illegal voting and defending the right of his supporters to violently attack the US capitol. However, others have questioned this move as too little too late on a platform already abused by hate speech and conspiracy theorists. So, does Twitter help democracy or hinder it?

In the aftermath of the attack on the US capitol, Twitter suspended more than 70,000 accounts promoting QAnon content. Forbes reported that approximately 56% of Republicans now believe that far-right conspiracy theory QAnon is at least partially true, and Civiqs reported that the number of Americans who have never heard of QAnon had fallen from 35% in July 2019 to 14% in September 2020; it is impossible to ignore social media’s role in promoting the conspiracy theory. A recent poll by NPR has also found that 71% of Republicans, 37% of Independents and 15% of Democrats believe that there is a “deep state working to undermine President Trump”— one of the conspiracy’s core beliefs.

The rise of Covid-19 misinformation has made it clear that Twitter is a tool for spreading conspiracy theories. One Cornell University study observed the gravity of the president’s #FireFauci retweet in fuelling the Fauci conspiracies. It also noted the danger posed by Mikki Willis’ ‘Plandemic’ pseudo-documentary, a pair of conspiracy videos which gained millions of views through Twitter.

‘Plandemic’, featuring an appearance by disgraced former researcher Judy Mikovits, perpetuated several lies about the coronavirus – ‘masks cause coronavirus’, ‘flu vaccines contain coronavirus’, ‘the virus was manipulated’ – with absolutely no scientific backing. This failure of Twitter to detect or regulate misinformation poses a major threat to democracy, a failure which is particularly sinister given the 12% of US adults (71% of Twitter users) who get their news from the platform.

However, others have questioned this move as too little too late on a platform already abused by hate speech and conspiracy theorists. So, does Twitter help democracy or hinder it?

The use of Twitter to spread misinformation has been highlighted further by recent election fraud claims. On January 25th, Mike Lindell (CEO of My Pillow, Inc.) was suspended for repeatedly tweeting disinformation about the US election. 52% of Republicans believe that Trump “rightly won” the election, with the spread of fraud rumours so great that both Instagram and Facebook have blocked the #StoptheSteal hashtag — a step that Twitter has not taken.

Between the summer political convention and the election weekend, the Hunter Biden conspiracy saw 31.3 million mentions throughout social media, alongside 14 million mentions of mail-in election fraud across platforms. Again, Twitter has been used as a vessel to undermine democracy as it has failed to regulate the spread of false information. The issue is not only with the platform itself but with how it is discussed. Fox News anchor Tucker Carlson, who in June 2020 became the most-watched host on US cable news, described Twitter’s recent series of suspensions – a step toward the regulation of conspiracy – as “an unprecedented crackdown on our basic civil liberties.”

Carlson has been quoted telling his 4 million viewers that “millions of Americans sincerely believe that the last election was fake. You can dismiss them as crazy. You can call them conspiracy theorists. You can kick them off Twitter. But that won’t change their minds.” This has only further fuelled rumours that a deep state conspiracy and ‘Big Tech’ are working against Donald Trump, as even Twitter’s regulations are used by the far-right to undermine democracy.

Without even accounting for the inherent dangers posed by social media monopolies, these concerns about rising hate speech and the free reign of conspiracy theories online are major concerns for the safety of democracy.

In early 2020, Twitter saw a 900% increase in hate speech directed towards China and Chinese people, a horrific statistic, and one of the more terrifying given recent studies linking rising hate speech online to rising crimes against minorities. Cardiff University’s ‘HateLab’ project found “a consistent link between Twitter hate speech targeting race and religion and racially and religiously aggravated offenses that happen offline.”

Similarly, a study by Princeton University scholars Karsten Muller and Carlo Schwarz investigating Islamophobia on Twitter and its link to rising hate crime found that “a one standard deviation higher exposure to Twitter is associated with a 32% larger increase in hate crimes with the 2016 presidential campaign period” suggesting a dangerous link between rising hate crime and online engagement. The Washington Post has reported that Dylann Roof, the Charleston church shooter who murdered nine black worshippers and clergy, had become ‘self-radicalised’ online – another horrific example of the danger posed by the failure of social media to de-platform racists.

Without even accounting for the inherent dangers posed by social media monopolies, these concerns about rising hate speech and the free reign of conspiracy theories online are major concerns for the safety of democracy. It is easy to mock the tweets of Trump’s allies as ridiculous – see Kayleigh McEnany’s tweet describing Raphael Warnock as an “anti-military, anti-police, Fidel Castro-inviting, Reverend Wright-loving Marxist” – but it remains clear that these posts pose a very real danger in the spread of conspiracy, hatred, and undermined democracy. If it wants to become a positive tool for democracy, Twitter must carefully regulate the conspiracies and hate speech it has allowed to run rampant.