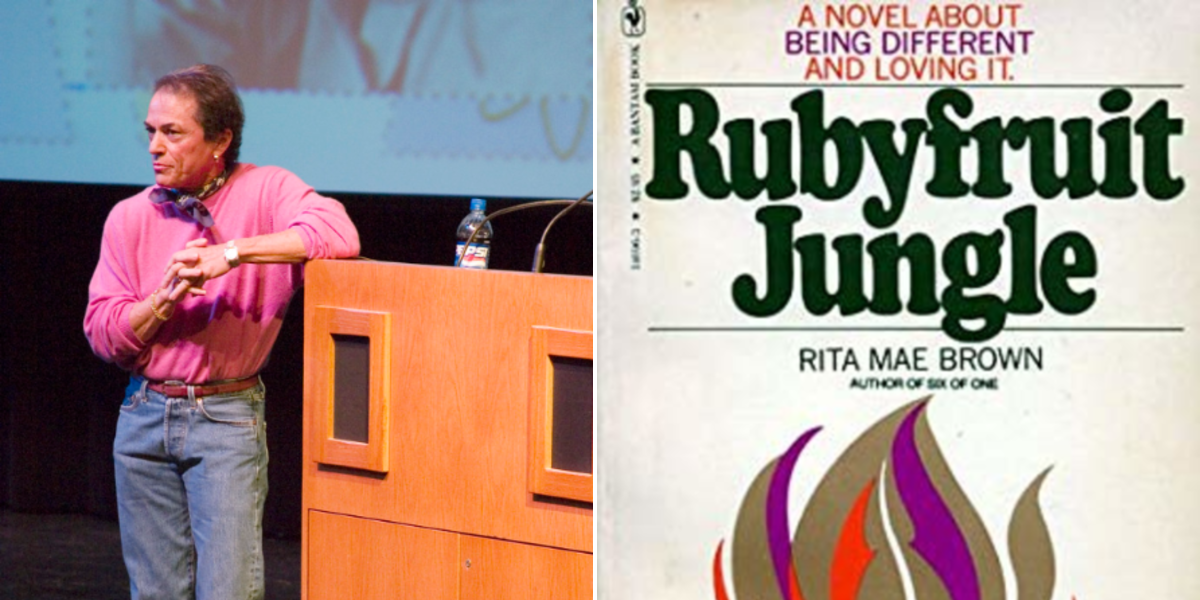 There are always lots of recommendations floating around of what to read, watch, and listen to in LGBT history month. However, finding older books and films that clearly foreground queer characters can prove difficult: the lengthy backlog of historical classics that emphasise heterosexual relationships doesn’t exist in quite the same way for LGBT relationships. I decided to read Rita Mae Brown’s Rubyfruit Jungle, widely known for its taboo-breaking and uncompromisingly lesbian narrative. 2021 is fifty years since Brown wrote the novel.

When it was republished in 2015, it was lauded as the first explicitly lesbian American novel. Brown wrote of her concern that its categorisation as a lesbian novel meant it was sidelined. She wrote of how much had changed, but also how much more needed to be done: “If Rubyfruit Jungle helped to push you on your path to freedom, I’ve done something right”. Brown doesn’t necessarily believe the book is revolutionary, but many of its readers have found it revolutionary – Google will tell you that it is brilliant in both being explicit about its queerness and deeply funny.

This description – both explicit and funny – is still something that seems rare in queer literature. I have often found myself avoiding reading novels like Radcylffe Hall’s The Well of Loneliness because of their reputation for being among the most depressing novels ever written. Many of the go-to queer texts for women are also almost painfully filled with subtext rather than openness. Mrs Dalloway’s kiss with Sally, beautiful as it is, is not a replacement for the huge tomes that have amassed about heterosexual love stories.

And if it is loud and open lesbianism you are searching for, this book will fulfil that. The title, Rubyfruit Jungle, is a description of Molly’s experience of New York: a large quantity of vaginas, in case you had not understood the symbolism. The original cover and subsequent covers have not allowed this to be missed, with their O’Keefe-esque flower illustrations. When asked what she means by the phrase, Molly tells her friend “women are thick and rich and full of hidden treasures and besides that, they taste good”.

The novel follows its protagonist, Molly Bolt, from middle school to adulthood, and it explores her grappling with her sexuality, difficult familial relationships, and being a woman in what was still very much a man’s world. In many ways, the first half feels strangely similar to Harper Lee’s To Kill a Mockingbird – the same child’s voice in a difficult and complicated America.

It shifts from narrative-based plot to almost stream of consciousness asides and back again at alarming speed. She is a self-described “full-blooded, bona fide lesbian”. Not only are there long and descriptive sex scenes but more importantly Molly’s love and yearning for various women across the chapters feel really authentic and are probably the book at its best.

It isn’t, however, the comedic book other reviews might suggest. I went into the book wrongly believing that it would be a happy book but the difficult experiences of women identifying as a lesbian in this period of American history are not shied away from. She’s kicked off her scholarship, generally avoided and then sent to a psychiatric facility for openly sleeping with her roommate.

None of the relationships can be said to be particularly healthy either. They range from an alcoholic roommate, a 15-year-old girl (and her mother, though at separate times), and many women in denial about their sexuality until Molly helps them “discover” their lesbianism. This in itself makes for uncomfortable reading, as the line between Molly helping them to break free of constraints, and Molly ignoring their lack of consent breaks down.

This description – both explicit and funny – is still something that seems rare in queer literature.

Brown seems largely concerned with repelling labels. Why, Molly asks, “does everyone have to put you in a box and nail the lid on it? I don’t know what I am […] I’m me. That’s all I am and all I want to be. Do I have to be something?”.

It is not only labels of sexuality that the book rejects: early in the novel Molly is told that she is a “bastard”, but she quickly rejects this. It is not, in her eyes, a fact, but rather something she can choose to be true or not true – she simply chooses to ignore it. “I wished the world would let me be myself” Molly recollects. However, in doing this, at times it can end up being reductive, and with a modern standpoint, uncomfortable.

In her angry disavowal of labels and categories, Molly ends up undermining other women’s ability to define themselves. The scene in which she goes to a gay bar in New York and learns of the butch/femme distinction that is used there is a particular example of this. Rather than Molly’s experiences teaching her to accept other people as they choose or want to be – or simply are – it instead strays into a place of judgment.

For Molly, those inhabiting butch identities are disavowing their womanhood, they’re playing at something they’re not. The book has therefore been criticised for ridiculing butch culture as heteronormative.  It’s impossible to get through those pages easily or without reflection. Much, it seems, has changed since 1971 – but perhaps not enough.

At film school, Molly is the only woman and she is shunned by the male students and teachers. She has to steal the equipment in order to be allowed to use it. Whilst her classmates are making dark sexual film sequences, Molly returns to her hometown and makes what seems to be a documentary of her mother’s domestic life. She makes up with her mother, and she vows to make her own feminist way in life.

The ending, as with much of the plot, feels slightly like a cliché or a caricature of plots that have been recycled over and over again. But that forgets that this book was genuinely pioneering in its time. If it feels old-school it is because its legacy has been so long-lasting. Reading Rubyfruit Jungle critically, and with a strong awareness of its complexities can be a great exercise for LGBT history month.