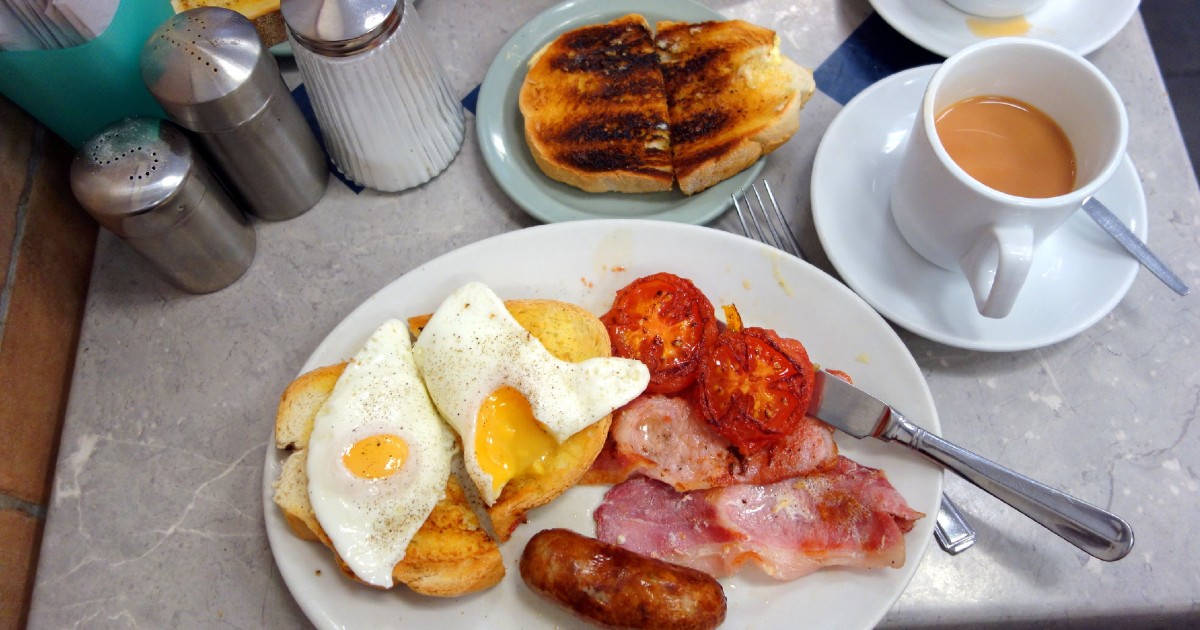 An Ode to Greasy Spoons

Image description: A plate with toast, eggs, a sausage, tomatoes and bacon, surrounded by a mug of tea, napkins and salt and sugar shakers.

Upon moving to my second-year student house in the Cowley area, I stumbled upon the institution that is Tick Tock Cafe. For readers who are unfortunate enough to dwell solely in the city centre during term time, the cafe is a ‘greasy spoon’ just off the Cowley Road roundabout.

Your next question may well be: ‘well what on earth is a greasy spoon? That hardly sounds pleasant’. Now, if you are an international student, you are exempt from my subsequent scorn, but if you are from the UK then I can only assume that you either live in the countryside or somewhere so unbelievably posh that your local chippy serves lobster and Dover sole.

A greasy spoon is, according to Collins Dictionary, a ‘small, cheap, unattractive café that serves mostly fried food’. This strikes me as a little unfair, but it shall have to suffice as a working definition.

No, it isn’t gourmet. No, you can’t get smashed avocado as a sad excuse for breakfast. Smoked salmon? Get out. It’s proper comfort food. No faff.

Yes, I suppose I could make it at home, but the fry up is greater than the sum of its parts. I can’t compete with the pure greasy goodness that is served up to me by waiting staff who smile at me as if they poured their heart (albeit a rather cholesterol flecked one) and soul into it. I lack the nerve, the skill, and the secret ingredient, love.

However, I do have to admit with dismay that the line between genuine intent and ironic kitsch can sometimes be hard to discern. Take, for instance, the Cafe Diana in Notting Hill. Naturally, this is a Princess Diana themed cafe that is filled to the brim with photographs of the Queen of our Hearts. I’m not going to question it. Apparently, she was a visitor there, which seems slightly narcissistic.

However, that would be a distraction from the main point of a greasy spoon: the food. The fry up tends to be the main draw, but there are other options as well such as jacket potatoes, sarnies/butties/baguettes/toasties. Sometimes there is a quiche, but probably not.

There may be salads, soups, chips and burgers. There can be cake. Some even offer hummus. I’ve had halloumi in the more worldly ones. You get the idea – the food is straight to the point and good for the soul, if not the coronary system.

Back home, up North (Manchester to be precise) my mother lives next door to a greasy spoon (also known as caff). Thus I had yearned for a slice of unfussy nostalgia, and at last I had found it, nestled on the end of Cowley Road with the Tick Tock Cafe.

Bliss it was in that sleepy dawn, to be alive, absent-mindedly working my way around a slice of buttered white toast whilst poring over the tabloids. (NB: In this scenario, white bread is the only valid choice in the white v. brown dichotomy to which we are bound.)

However, much like the French Revolution about which Wordsworth wrote, a terror descended upon my newly-found oasis. That terror was in the shape of – I have to admit – other students. You see, the beloved greasy spoon is under threat from an insidious force that goes by the name of gentrification.

As soon as I saw the gang of puffer-wearing, RP-voiced youths sauntering through the door, I sighed at their incongruity (and also mostly because they were being loud and irritating).

You see, greasy spoons are falling out favour in today’s towns and cities, no longer glamorous enough for the trendy, health-conscious young professionals who sweep in and suck the souls out of local communities. Times change, and with that brings Pret a Mangers on street corners. How sad. I bet those Teddy Hall students who ruined my quiet morning all have Pret subscriptions.

I suppose that this is reflective of my own inner turmoil about being a first-generation university student at Oxford, and thus constantly feeling as if I am participating in a solidly middle class overwrite of my roots. Self-gentrification, if you will. Maybe when I graduate I’ll develop a taste for smashed avocado on sourdough.