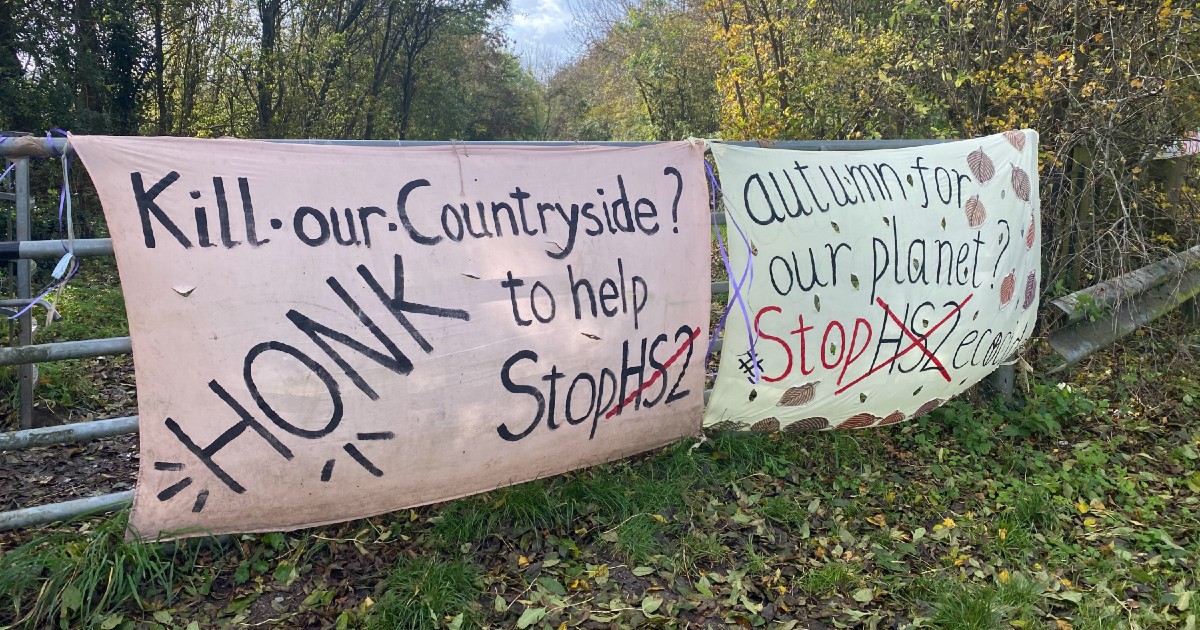 Euston, we have a problem – protesters are tunnelling through HS2 plans

It has been a tumultuous and challenging past few weeks for campaigners, self-titled ‘Tree Protectors’, who are camped at Euston Square Gardens to protest against the construction of the HS2 rail network. The rapidly-evolving situation from 26th January has seen evictions, arrests, and attempts by bailiffs to force activists out of their underground tunnels.

This comes against a backdrop of years of protests about the huge infrastructure project, and these have ramped up in recent months as the first phase of development started for the London-Birmingham line. Campaigners have built woodland treehouses and engaged in non-violent direct action against construction work and the felling of old trees, whilst HS2 Ltd, the government-backed company behind HS2, has called these protests “costly to the taxpayer”.

Perhaps something similar could be said of the project itself: the current estimate of over £100 billion across 20 years is much greater than past figures. Critics are questioning the value of this scheme linking major English cities in the Covid era of video calls and reduced travelling, and whether it will help reduce carbon emissions in the long-term. Meanwhile, environmentalist groups are concerned about the impact on UK wildlife and habitats. The Wildlife Trust reports that HS2 will lead to the destruction and ‘irreparable’ damage of 108 ancient woodlands, 693 wildlife sites and 33 sites of special scientific interest.

A week of evictions, arrests and attempts to force out activists

The camp close to Euston Station, the HS2 London terminus, is made up of treehouses, tents and a sheltered wooden structure, nicknamed ‘Buckingham Pallets’. This covers the entrance to the estimated 100 foot-long ‘Kelvin’ tunnel. How the tunnelling went undetected may be explained by a denial of responsibility of local authorities to check for protest digging at Euston Square. The tunnels, dug over several months, are supported by wooden joists and boards and so are at the mercy of changing soil conditions. As of Sunday 31st January, there are believed to be nine protesters still inside, evading eviction.

HS2 Ltd is thought to have taken legal possession of the site on 27th January and argues that it is needed for building work. Evictions began in the early hours of Wednesday, and five activists were arrested for ‘trespassing’, spurring campaigners to question why these evictions are happening now, in the middle of a government-enforced national lockdown, after several months of encampment during previous lockdowns. It is thought that four protesters locked themselves inside the tunnels on Wednesday.

On Thursday and Friday, there were five more arrests, including three for breaking lockdown regulations, and conditions inside the tunnels worsened due to rain, sleet and snowfall. Tunnelled protesters reported oxygen shortages and numerous internal collapses as soils turned to ‘liquid mud’. Meanwhile, the National Eviction Team. (NET) continued trying to remove protesters, citing a “risk of drowning” and dangers of tunnel collapses as the reasoning behind attempts to break in. The NET also stated that they were using equipment to check the tunnels for gas exposure and for flooding from nearby pipes.

At least five activists were still inside the tunnels on Saturday, facing what they perceive to be akin to ‘torture’ from the constant loud power tools of bailiffs, depriving them of sleep. The NET was concerned that protesters were thwarting help and stopping air quality checks as officials were trying to “supply them with air”. By this time, paramedics, police, and firefighters were involved in talking to protesters and in arresting others at the camp.

Activists made public their emergency legal action against safety regulators, the Health and Safety Executive (HSE), on Sunday morning, and said that they are put in danger by attempts from HS2 officials to break in. Footage on Facebook from Sunday afternoon showed debris falling onto tunnelled protesters, as bailiffs dug into the earth above their heads. There were minimal safety measures as some protesters were given safety goggles, but activists claim that they were only officially informed of digging attempts after many hours of witnessing it from below. The legal action called on the HSE to directly inform the activists’ legal team of measures taken to ensure the safety of all Euston protesters.

The Extinction Rebellion off-shoot supporting the protests, HS2 Rebellion, maintains that protesters have been denied proper safety consideration and that their rights have been hampered. In a statement released on Thursday, they accused bailiffs of removing overhead shelters from the camp, “leaving [protesters] exposed to the elements overnight in the middle of winter”, and also of taking away food and water reserves. Tim Crosland, the barrister of the HS2 Rebellion legal team, has said: “The denial of food, water and essential provisions to the protesters is an unlawful interference with the right to protest.”

Despite the constant threat of eviction and the deteriorating conditions in the tunnels, campaigners are very clear about why they are protesting, and call HS2 the “most expensive, wasteful and destructive project in UK history.” The activists are confident that they can last “several more days” using current provisions. Daniel Hooper, a veteran tunnel protester known as ‘Swampy’, hopes that the tunnels will be a “tipping point” in the current climate and ecological emergency crisis in its impact on public opinion towards HS2.

According to HS2 Rebellion, there are another six independent campsites, dubbed ‘Protection Camps’, that are actively protesting against the destruction of ancient woodlands along the London-Birmingham route. Most notable is the Jones Hill Woods camp, also known as ‘Roald Dahl Woods’, which is considered to be an inspiration for Fantastic Mr Fox and other works as the famous author lived in the neighbouring town of Great Missenden.

A report published by University of Oxford academics in October was critical of the government’s decision to continue with HS2 in the aftermath of Covid-19, saying that “HS2 is the type of project that should be avoided because it is bespoke, slow and prone to waste.”