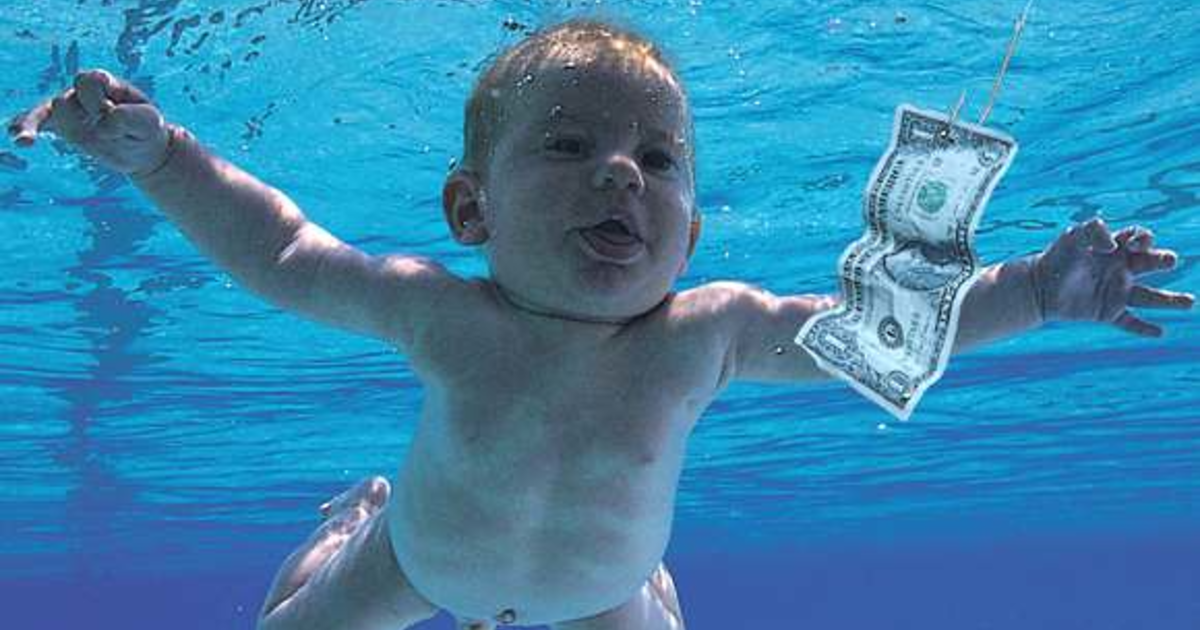 Image description: Nirvana’s album cover for Nevermind, a baby in a swimming pool reaching for a dollar bill on a hook

In 1991, one of the best selling albums of all time was released into the world. Through Nevermind, the follow up to their debut album Bleach, Nirvana both commercialised their sound and brought grunge and alternative rock into the mainstream.

Cobain’s songwriting relies heavily on power chords, simple melodies and dissonant muddy harmonies to achieve the moody, disturbed atmosphere in Nevermind. As the album approaches its 30th birthday, it’s become a rock staple that everyone can recognise. ‘Smells Like Teen Spirit’, ‘Come As You Are’ and ‘Lithium’ are iconic pieces in their own right and the album as a whole continues to form the basis of 90s grunge rock playlists and road trip soundtracks. Spencer Elden, the baby on the front of the album is nearly 30, he’s an aspiring artist in LA and now looks like this.

Returning back to its creation, Nevermind encapsulates a turbulent moment in time. On the dawn of the Bush-era, 1991 saw the fall of the Soviet Union, the Gulf War and Operation Desert Storm. The jarring way in which the dynamics in the album fluctuate between this harsh obnoxiously loud heavy rock sound to a calmer more melancholy tone mirrors the outside world as well as Cobain’s personal troubles. These included his mental health issues and recovery from his split from Tobi Vail, who inspired many of the songs in the album.

An overflowing of anger and frustration, ‘Smells Like Teen Spirit’ encapsulates the hedonistic high of a night out.

Although this is a thread that continues throughout the album, it is seen in its best form in ‘Smells Like Teen Spirit’. The now-iconic riff leads us into an erratic intro with a forceful beat and liberal use of distortion. Instead of escalating, this is pulled back a bit into the verse, relying on the drums to push through but diminishing the guitar to just two notes that are repeated throughout the verses. Cobain’s mumbly and dissonant vocals sit just above the rhythm section, it’s hard to make out what he’s actually saying but the tone speaks volumes. It oozes this kind of disconnect and melancholy that would characterise the experience of young people in the ’90s. It also has the effect of making the eruption into the chorus so much more effective. An overflowing of anger and frustration, ‘Smells Like Teen Spirit’ encapsulates the hedonistic high of a night out.  This is carried through to songs such as ‘In Bloom’ and ‘Endless, Nameless’ that revel in a similar kind of chaos, still always built on simple chord structures and melodies that allowed Nirvana to experiment with timbre and big dynamic changes.

There are also quieter, and more sinister moments in the album. Towards the middle, they surprise us with ‘Polly’. This piece has no bass or percussion and instead relies solely on guitar, Cobain’s nonchalant melodies and dissonant harmony. Cobain takes on the persona of Gerald Friend, a sadist who raped and tortured a girl a few years before. This is the darkest piece in the album. In between the more chaotic songs where Nirvana seems to lash out, they position this piece perhaps as justification for their anger towards a hostile world where people such as Friend exist.  Cobain does this again in ‘Something In The Way’, imagining a rock bottom state for a person to be in: “like if I was living under the bridge and I was dying of A.I.D.S., if I was sick and I couldn’t move and I was a total street person. That was kind of the fantasy of it.”. In the lyrics of Nevermind, Cobain explores the darkest parts of our world and the helplessness that individuals have within it, choosing to revel in escapism and anger to lash out against it.

In between the more chaotic songs where Nirvana seems to lash out, they position this piece perhaps as justification for their anger towards a hostile world.

‘Lithium’ instead is a moment of respite from depressive and disillusioned themes that run throughout the album. If not optimism, it shows a person managing to cope with the monotony of everyday life. Coupled with a more upbeat bassline and melody, and the same chaotic type of chorus used in other songs of the album, but this time tinged with an excited feel rather than one of desperation. Perhaps 30 years later,  in a time when everything seems to be falling apart, ‘Lithium’ still offers us a way to deal with frustration at the way life has come to a standstill. Whether or not the era we live in is similar though, Nevermind continues to stand as a classic album, and speak to almost universal angst and propensity to be angry at an unforgiving world.