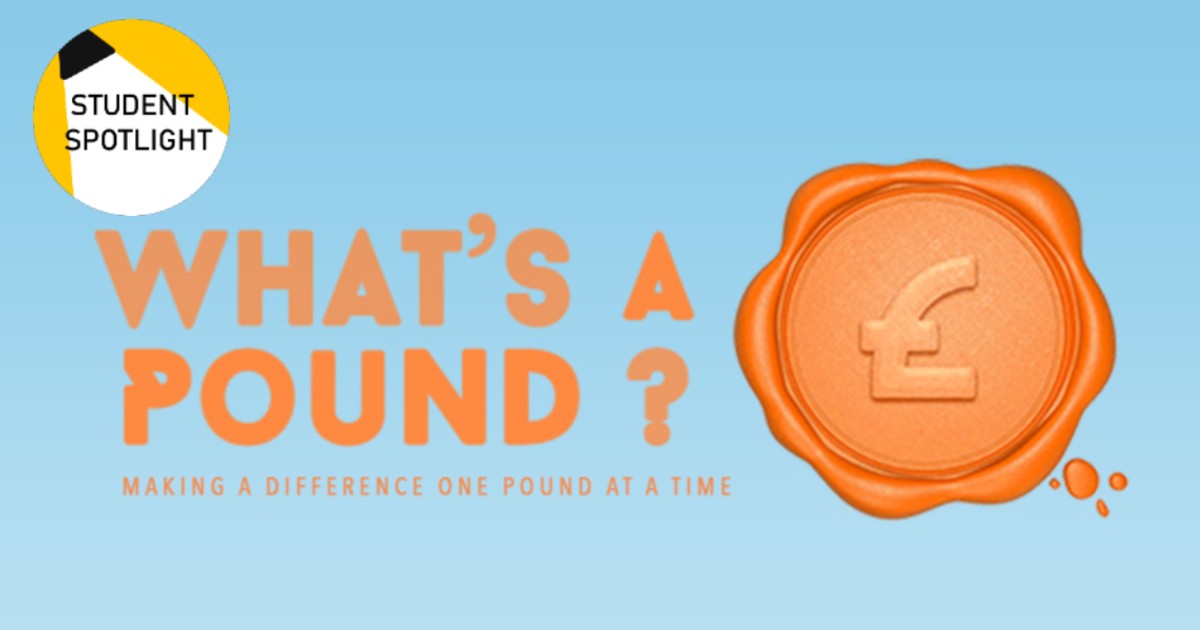 We spoke to Isabel Atkinson, the current President of the Oxford branch of ‘What’s a Pound?’ about how charitable giving at Oxford is changing.

The ‘What’s a Pound?’ campaign now operates at a number of universities but is still based in Oxford – where we organise the majority of the activities. We offer an outlet for events (and now brands) to engage in charitable giving with the need for little or no effort on their part. Over the years What’s a Pound have raised tens of thousands of pounds for charities, both in Oxford but also across the UK! This can often make a huge difference to the viability of small, locally based charities.

How did it begin?

‘What’s a Pound?’ began with an idea from our founder Lauren, a student at St Catz five years ago. She began to notice the enormous divide between the conditions of the local homeless population and the opulence of university social events. She began by lobbying the organisers of the Catz ball with the simple idea of them adding £1 to the cost of each ticket, to be given directly to charity. What began as a one-woman operation soon grew to a committee in Oxford – which would then expand to multiple committees across the UK and indeed abroad (our sister campaign ‘Who gives a Buck’ is doing amazing work at UWA in Perth!).

What are your meetings are like? How would a normal week during term look for a student involved?

Under more normal circumstances, our meetings could look like a small gathering of friends in a college bar from the outside. However, since March 2020 – like everyone else – we have had to adapt to working online: we now have our weekly check-ins via Teams.

Despite moving online, I like to think that our meetings still have a really friendly atmosphere where we can all share ideas and have a general chat about things going on in our lives – or catch up on any Oxford goss! There is no standard week for any member of the committee, as each person is assigned quite a specific role whether that be managing our social media, speaking to our teams at other universities, or reaching out to brands or charities. Every week, I am amazed by the amount of work that the team get through: even in weeks when I feel that I have barely had a moment to breathe they have seemingly always managed to go above and beyond what we have agreed needs to be done! That being said, making sure that people don’t feel too pressured during term time is one of my major concerns as President, so I am always keen to emphasise that academic and/or personal issues must always take priority.

I have been involved in ‘What’s a Pound?’ since January 2020 and prior to the pandemic, our work was purely focused on our events-based model. When COVID-19 arrived in March 2020 and it became clear that events were going to be cancelled, I was apprehensive about how much work we would be able to do until this was all over.

However, over Easter last year, our former President and our founder, Lauren, had a series of productive conversations where they agreed that we would begin looking at seeking brand collaborations with small businesses. Over Trinity term and the summer vacation, we worked with teams at other universities and were able to secure ten separate collaboration agreements! This has helped us to continue our activities – something which had felt impossible at one point.

Throughout the last two terms we have continued to focus on collaborations (whilst still reaching out to planned events – here’s hoping!) and have worked successfully with Oxford RAG on their Oxmas raffle.

What is the most rewarding part of being involved in your group?

The most rewarding part is probably being able to look at our end-of-year totals and being able to see the amount of money we have raised, which all goes to support brilliant charities. In addition, being involved has also led me to meet so many wonderful people from across Oxford and getting to work with them as part of a small group for a whole year is a really great bonding experience.

We are still looking to partner with any events that have been planned for the near future and always on the hunt for brands that might want to work with us. It is also a major goal to get us re-established at Cambridge University and Durham in the next year, as the collegiate systems there offers similar opportunities to those we have utilised so well here at Oxford.

The first thing that really helps us is to follow us on our social media, on Facebook and on Instagram, as this helps us to secure more brand collaborations.

Secondly, we would love to hear from anyone that knows of a small business that might like to work with us or has a friend at another university who might be excited about establishing ‘What’s a Pound?’ there.

Finally, if you are involved in any events around Oxford, we always appreciate people advocating for the benefits of working with us. If you are really interested in what we do and think you could be passionate about the work I have outlined, please do stay in touch as we recruit annually onto our committee.

You can get in touch with ‘What’s a Pound?’ on social media or email them at whatsapound@gmail.com.